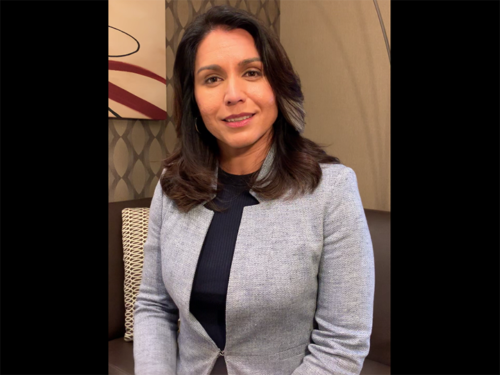 Presidential Candidate Tulsi Gabbard Takes Stand for a Just Resolution of the Armenian Genocide; Security and Prosperity for Armenia and Artsakh

— “The Armenian community here in the United States has played a positive and integral role for well over a century, and I am proud to support and stand with this community’s objectives to realize a just resolution of the Armenian Genocide and to promote the security and prosperity of the citizens of Armenia and Artsakh.” – U.S. Presidential Candidate Tulsi Gabbard

WASHINGTON, DC – Hawaii Congresswoman and Presidential Candidate Tulsi Gabbard (D) called for a just resolution of the Armenian Genocide and pledged to promote the security and prosperity of Armenia and Artsakh in a video statement released to the Armenian National Committee of America (ANCA) earlier today.  It is the first presidential campaign statement on Armenian American concerns released in preparation for the much anticipated 2020 election.

Rep. Gabbard’s video is available at:

“I was so grateful to have the opportunity in 2017 to visit Armenia and Artsakh, where I gained a deeper understanding about both the challenges and the opportunities facing the Armenian people,” began the two-minute statement, which comes just days after a meeting with ANCA advocates in the San Francisco-Bay Area.

“The Armenian community here in the United States has played a positive and integral role for well over a century, and I am proud to support and stand with this community’s objectives to realize a just resolution of the Armenian Genocide and to promote the security and prosperity of the citizens of Armenia and Artsakh.”

Rep. Gabbard stated her support for the continued role of the U.S. as a mediator in Artsakh peace talks through the OSCE Minsk Group, then noted, “but this does not mean that we continue a policy of false parity and fail to speak honestly when either party violates the cease-fire. In order to maintain credibility as an impartial broker, the United States should not promote a resolution that’s based on immediate and permanent concessions by Armenia or Artsakh only, in the absence of equivalent concessions by Azerbaijan.  And while the principle for respect for territorial integrity must be adhered to, we also must stand for the right to self-determination for all people.”

Rep. Gabbard urged that the “Armenian Genocide must be recognized in order to bring about justice for one of the most egregious crimes against humanity in history.”

“We want to thank Congresswoman Gabbard for clearly communicating her constructive policy priorities, on video and in person, with Armenian American voters,” said ANCA Executive Director Aram Hamparian.  “Her proven track record of legislative support – including, of course, her fact-finding mission to Artsakh and Armenia – has earned her an ‘A+’ rating from the ANCA. Heading into the 2020 primaries, Congresswoman Gabbard‘s pro-active campaign outreach has set the standard for candidates seeking the support of a highly engaged Armenian American electoral constituency that is well-positioned to play a decisive role on Super Tuesday and in other nominating contests across the country.”

Rep. Tulsi Gabbard is among over a dozen Democrats who have announced their intention to vie for the U.S. presidency in 2020.  In order to participate in nationally televised primary debates beginning in June, 2019, the Democratic National Committee (DNC) has announced that candidates must have garnered 65,000 unique donations of any amount.  To assist Gabbard in reaching this threshold, U.S. residents can visit https://secure.actblue.com/donate/tulsi2020?refcode=web-nav.

Congresswoman Gabbard received an “A+” rating by the ANCA in 2018 for her support on a broad range of Armenian American community priorities including co-sponsorship of the Armenian Genocide Resolution (H.Res.220), support for expanded aid to Armenia and Artsakh, and efforts to block U.S. arms sales to Turkey following the 2017 attack on peaceful protesters by President Erdogan’s bodyguards. In November, 2017, Rep. Gabbard was one of three U.S. Representatives to travel to the Republic of Artsakh, over objections by the U.S. State Department.

Her impressions of her trip to Artsakh and Armenia, shared at an ANCA-San Francisco public forum, is available on the ANCA website:

In the current Congress, she is an original co-sponsor of the Armenian Genocide Resolution to be introduced by Rep. Adam Schiff (D-CA) and Rep. Gus Bilirakis (R-FL) in the upcoming weeks and has co-sponsored the Artsakh Travel and Communication Resolution (H.Res.190), introduced by Rep. Frank Pallone (D-CA), which seeks to lift barriers to close U.S. – Artsakh relations.

Rep. Tulsi Gabbard was elected to the Hawaii State Legislature in 2002 when she was just 21 years old, becoming the youngest person ever elected in the state. A year later, she joined the Hawaii Army National Guard. In 2004, she volunteered to deploy with her fellow soldiers, becoming the first state official in Hawaii to voluntarily step down from public office to serve in a war zone. She served two tours of duty in the Middle East, and continues her service as a Major in the Army National Guard. In 2010, Gabbard was elected to the Honolulu City Council and then in 2012 she won a seat in the United States House of Representatives, serving Hawaii’s 2nd District. She is one of the first two female combat veterans to ever serve in the U.S. Congress, and also its first Hindu member.