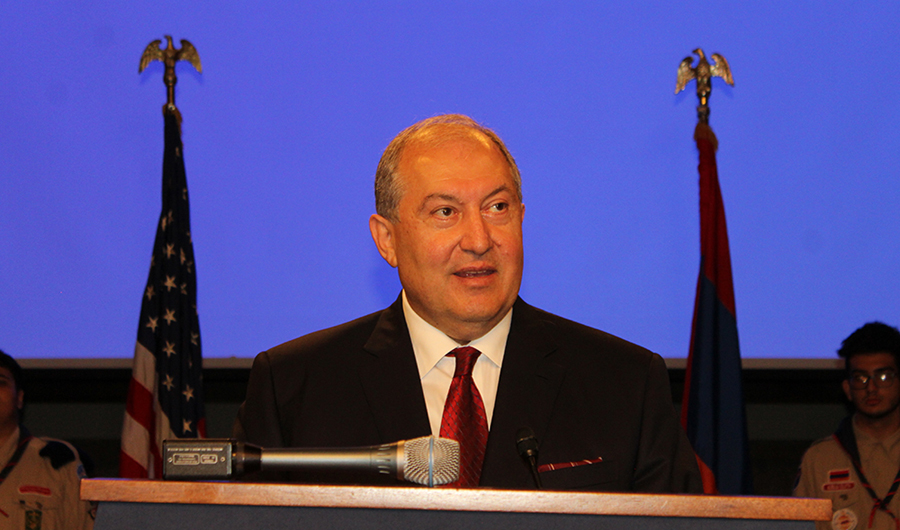 Armenia’s new President Armen Sarkissian reaffirmed his country’s abiding partnership with the United States – pledging the continued expansion of bilateral ties – during a powerful keynote address Tuesday before a capacity Capitol Hill crowd celebrating the 100th anniversary of the first Armenian Republic, organized by the Armenian Revolutionary Federation, Armenian National Committee of America (ANCA) and the Embassy of Armenia.
]

“The 21st century, is going to be our century,” said Sarkissian, after citing the critical role of the first Armenian Republic to set the stage of Armenia’s advances. “The time when the world was run by interest in energy, oil, natural resources, is gradually declining. The new era is the time when human values, the brain, hard work, honesty, and talent will be driving the world. And this country [the U.S.] is a wonderful example of that,” continued Sarkissian.

“We are the only bridge between Europe and Asia; the only bridge between Europe and Eurasia. And, the country status is rising with the real values of diplomacy. The message today is clear. We will do it. We will win. We will show the world not only revolution Armenian-style, we can not only build a country and call it a new Armenia, but that new Armenia is going to be a powerful country, a country that we all will be proud of, and we will march the world being proud Armenians.”

Acting Deputy Assistant Secretary of State for European and Eurasian Affairs Jorgan Andrews praised the “peaceful popular movement ushering in the new democratic era in Armenia” and pledged to work with President Sarkissian and Prime Minister Pashinyan to “to help bring back the will of your people to combat corruption and establish representative accountable governments, rule of law, greater respect for human rights and fundamental freedoms, checks and balances, and political and economic freedoms.” Addressing the Armenian-American Diaspora, Andrews noted, “we appreciate that you have served as a crucial bridge between our two countries for over 100 years now, we value your insights and look forward to continuing to work with you to strengthen U.S.- Armenia bonds.”

“No nation has been more committed than the United States to Armenian liberty, dating back to the time of the Armenian Genocide and U.S. recognition and relief efforts for the First Armenian Republic.” He cited ongoing efforts to deepen cooperation between the two countries, through a new tax treaty and an MCC STEAM grant transforming Armenia into a “Silicon Valley of the Caucasus,” said ANCA Executive Director Aram Hamparian.

He noted the shared commitment to regional peace through the bipartisan Royce-Engel proposals and the U.S. aid program to Artsakh and other enduring investments in peace. “Together, we can create the conditions for a peaceful, durable, and democratic resolution of status and security issues between Azerbaijan and Artsakh,” noted Hamparian.

The evening’s invocation was offered by His Grace Bishop Anoushavan Tanielian, Vicar General of the Eastern Prelacy of the Armenian Apostolic Church of America. “We give thanks for the blessings that you have bestowed upon the Armenian people who went out and were given a new life. United States of America: we thank you for delivering us from the depth of despair and unto clarity of liberty,” said Tanielian.