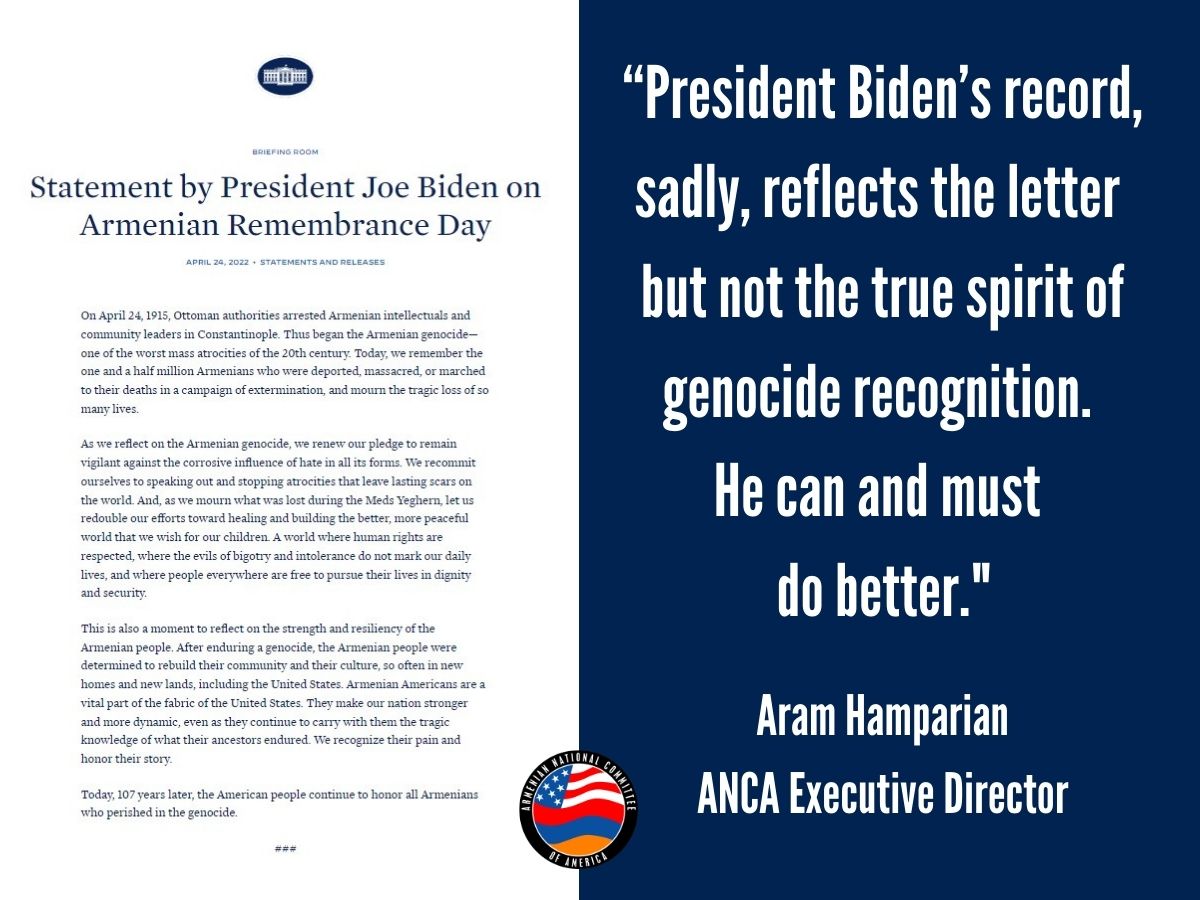 A year after President Biden rejected Turkey’s gag-rule on honest U.S. remembrance of the Armenian Genocide, Armenian Americans look for concrete U.S. action to secure justice for this crime and prevent a second genocide resulting from Turkey and Azerbaijan’s ongoing threats and attacks against Armenia and Artsakh, reported the Armenian National Committee of America (ANCA).

President Biden’s second Armenian Remembrance Day statement – issued on April 24th, the international day of remembrance of this crime – once again mourned the “one and a half million Armenians who were deported, massacred, or marched to their deaths in a campaign of extermination.” The statement continued, “As we reflect on the Armenian genocide, we renew our pledge to remain vigilant against the corrosive influence of hate in all its forms. We recommit ourselves to speaking out and stopping atrocities that leave lasting scars on the world.”

“President Biden’s record, sadly, reflects the letter but not the true spirit of genocide recognition. No sustained pressure on Turkey to reckon with its present-day responsibilities, no confrontation of Azerbaijan’s genocidal violence against Artsakh, no forceful challenge to Ankara’s ongoing denial of this crime, no active support for U.S. educational programs. He can and must do better,” concluded Hamparian.

In 2021, just one day prior to recognizing the Armenian Genocide, President Biden waived Section 907 of the FREEDOM Support Act, allowing continued U.S. military aid to Azerbaijan, an authoritarian regime that, along with Turkey, launched a devastating 44-day war against Armenia and Artsakh in 2020. Azerbaijan continues its attacks against Artsakh and has illegally stationed troops on sovereign Armenian territory. The ANCA and a coalition of U.S. faith-based, ethnic, and human rights organizations have called on President Biden to stop arming Azerbaijan.

The Congressional Armenian Caucus, in an ANCA-supported letter to House Appropriations Committee leaders set to go out early his week, is calling for zeroing out military aid to Azerbaijan and expanding U.S. aid to Artsakh and Armenia to $150 million to address the ongoing humanitarian toll of the Turkey/Azerbaijan attacks which forced 100,000 indigenous Armenians from their Artsakh homes, creating an ongoing humanitarian catastrophe.

Earlier this week, building on U.S. presidential and congressional recognition of the Armenian Genocide, Representatives Carolyn Maloney (D-NY) and Gus Bilirakis (R-FL) introduced the “Armenian Genocide Education Act.” The measure seeks to provide $10 million in funding over five years for the Library of Congress to educate Americans about Ottoman Turkey’s systematic and deliberate state-sponsored mass murder, national dispossession, cultural erasure, and exile of millions of Armenians, Greeks, Assyrians, Chaldeans, Syriacs, Arameans, Maronites, and other Christians, between 1915 and 1923. The ANCA-backed bipartisan bill already has over 50 cosponsors.

On April 27th, Armenian Americans will be joining Congressional leaders at the annual Capitol Hill Remembrance of the Armenian Genocide. The event will take place at the Rayburn House Office Building “Gold Room” from 6:00pm to 9:00pm EST.

The President’s full 2022 Armenian Remembrance Day statement is provided below and available on the White House website.

On April 24, 1915, Ottoman authorities arrested Armenian intellectuals and community leaders in Constantinople. Thus began the Armenian genocide—one of the worst mass atrocities of the 20th century. Today, we remember the one and a half million Armenians who were deported, massacred, or marched to their deaths in a campaign of extermination, and mourn the tragic loss of so many lives.

As we reflect on the Armenian genocide, we renew our pledge to remain vigilant against the corrosive influence of hate in all its forms. We recommit ourselves to speaking out and stopping atrocities that leave lasting scars on the world. And, as we mourn what was lost during the Meds Yeghern, let us redouble our efforts toward healing and building the better, more peaceful world that we wish for our children. A world where human rights are respected, where the evils of bigotry and intolerance do not mark our daily lives, and where people everywhere are free to pursue their lives in dignity and security.

This is also a moment to reflect on the strength and resiliency of the Armenian people. After enduring a genocide, the Armenian people were determined to rebuild their community and their culture, so often in new homes and new lands, including the United States. Armenian Americans are a vital part of the fabric of the United States. They make our nation stronger and more dynamic, even as they continue to carry with them the tragic knowledge of what their ancestors endured. We recognize their pain and honor their story.

Today, 107 years later, the American people continue to honor all Armenians who perished in the genocide.