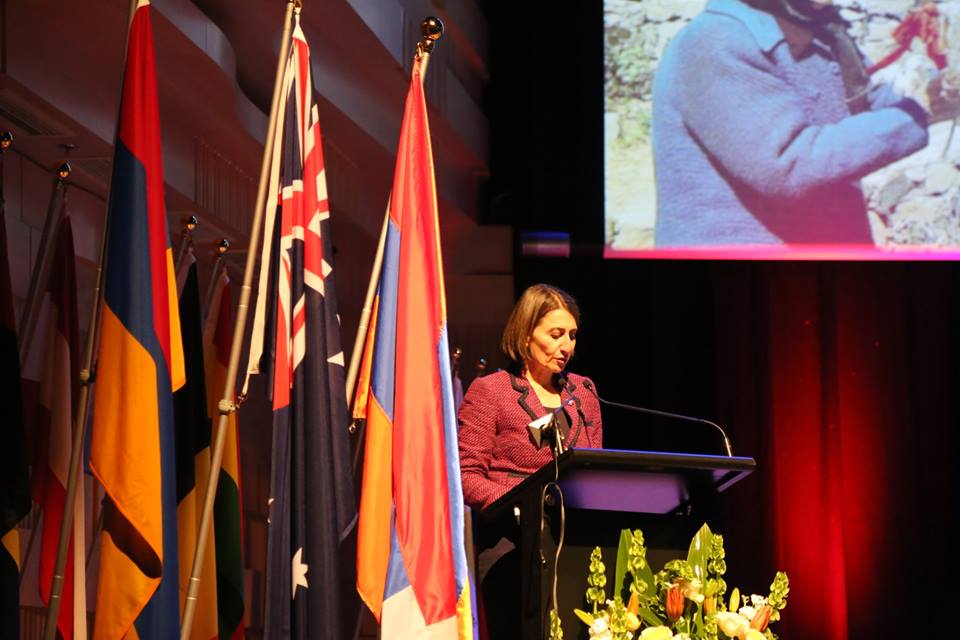 SYDNEY: The Premier of Australia’s largest state of New South Wales, Gladys Berejiklian has used her address at a Sydney commemoration event to call out Turkey for its “resolute and proactive denial” of the Armenian Genocide.

“The Turkish government’s resolute and proactive denial of the genocide is textbook,” Berejiklian explained. “Blaming the victim for provocation, minimising the severity of the crime, selectively using evidence (and) playing the mass killings down as a result of wartime casualties.”

“Under Article 301 of Turkey’s penal code, modern Turks are essentially banned from uttering the words ‘Armenian Genocide’ in their own nation; a move that enshrines genocide denial into Turkish law,” Berejiklian added.

“It is these tactics of continual denial by the Turkish government which prevent our collective healing 104 years on.”

Berejiklian was speaking on a day that the Armenian Genocide was prominent in Australian news, after media revealed that Prime Minister Scott Morrison had backflipped on his prior, accurate characterisation as ‘genocide’ of the Ottoman Empire’s systematic attempt to destroy the Armenian race.

Morrison’s statement to Armenian-Australians referred to the Armenian Genocide as “… the horrors that befell Armenian people at the end of the Ottoman Empire”.

The Armenian National Committee of Australia (ANC-AU) told the Nine Network of newspapers and Australia’s leading radio broadcaster, Alan Jones of 2GB that they would not read the Prime Minister’s and Opposition Leader’s statements at their commemoration events, as it would be disrespectful to an audience that is made up primarily of descendants of survivors of the Armenian Genocide.

Berejiklian was in the audience when it was announced that Morrison’s and Bill Shorten’s statements would not be read because they refrained from using the word ‘genocide’, something the ANC-AU said was because of a Turkish “gag order”.

In her speech, the Premier highlighted the power that words can have in the the process of healing.

“Words are powerful,” Berejiklian said. “The words people use and the way people say them have a profound effect on us. And so it is, that all of us here tonight have the responsibility, not just to remember, to mourn and to reflect. But most importantly, to renew our vigilance against denial and of discrimination of any type.”

“As descendants of survivors, this role weighs heavily on all of us, myself included. 104 years on, we still have much to do together to honour and preserve the voices of the 1.5 million victims of 1915 and of course, all victims of genocide.”

“History has shown us time and time again, that denial allows genocidal states to commit these heinous crimes in the belief they will escape the consequences. That’s why we can never forget. We can never forget the 1.5 million victims of the Armenian Genocide.”

Despite the Morrison backflip, Berejiklian said during her remarks that she was “confident” the Australian government would recognise the Armenian Genocide.

“I’m grateful that states around Australia, such as proudly here in New South Wales, and so many nations around the world have recognised the Armenian Genocide,” she said. “And of course, I look forward to the day when our very own Australian government does the same. I’m confident this will happen.”

“We thank Premier Berejiklian for calling out Turkey’s denial of the Armenian Genocide,” Kayserian said. “It is a time in Australia when we need political leaders who will not mince their words when it comes to such important human rights matters, and the Premier was unequivocal in her remarks, even noting that words matter in our collective battle against Armenian Genocide denial.”