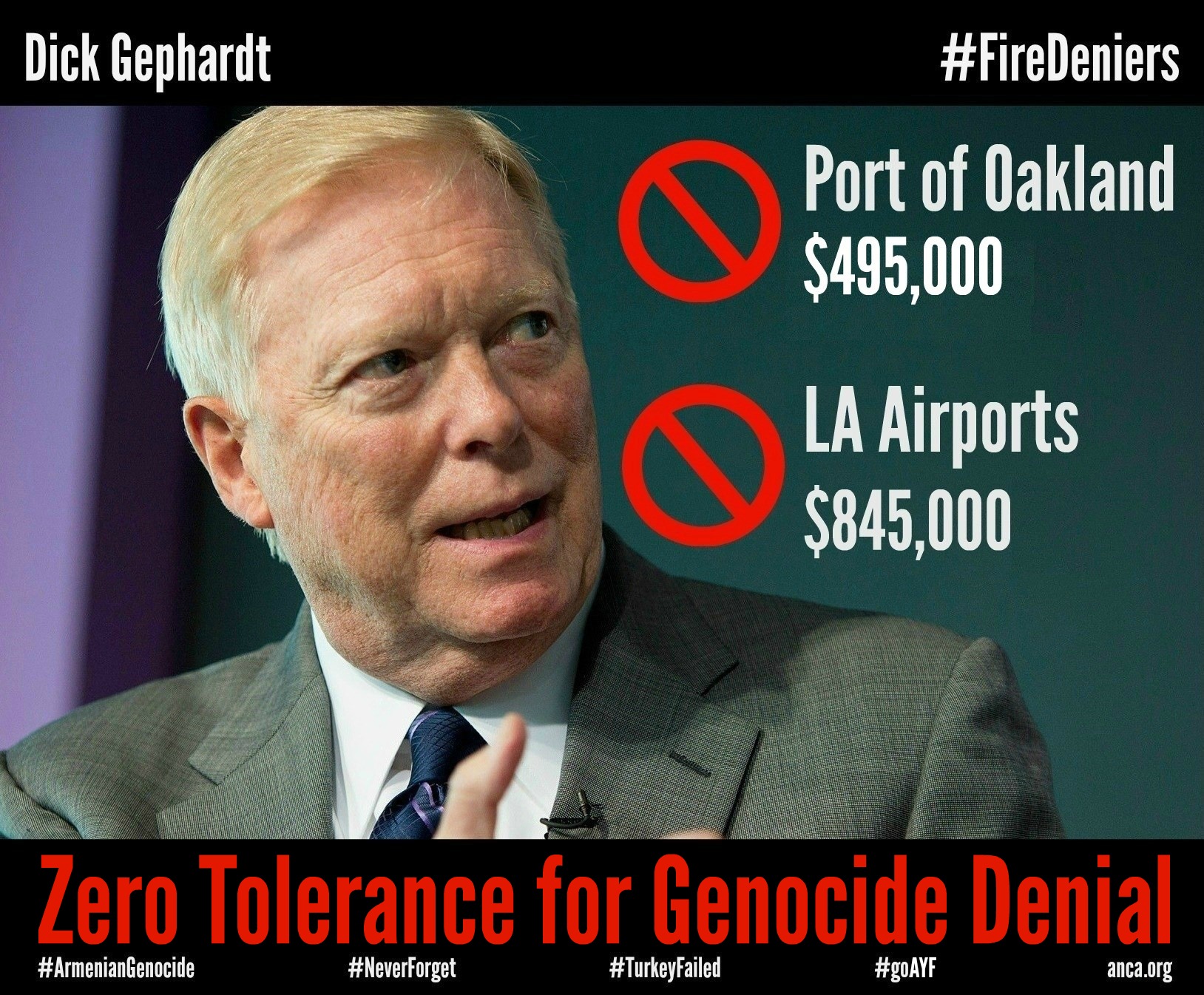 In yet another setback to Dick Gephardt – a former U.S. legislator turned lobbyist for Turkey – the Port of Oakland will not be renewing its six-figure lobbying contract with Gephardt Government Affairs, according to the Armenian National Committee of America-Western Region’s Bay Area chapter.

Former House Democratic Majority Leader Dick Gephardt serves as a registered foreign agent for Turkey and Ankara’s point person in obstructing American condemnation and commemoration of the Armenian Genocide. Last month, the Armenian National Committee of America – Western Region (ANCA-WR) praised the City of Los Angeles and its political leaders for moving to end a contract worth over $850,000 with Gephardt Government Affairs for advocacy work it was conducting on behalf of Los Angeles World Airports.

On February 24, 2015 the ANCA-Bay Area chapter wrote to the newly inaugurated Mayor of Oakland Libby Schaaf to express concerns about the Port of Oakland’s relationship with Dick Gephardt. The letter was addressed to the Mayor of Oakland because she is responsible for nominating all seven members of the Board of Port Commissioners, which controls the Port of Oakland. In their correspondence to Mayor Schaaf, the ANCA-Bay Area Chapter respectfully requested that the Mayor move to immediately end the contractual relationship between the City of Oakland (through the Port of Oakland)and Gephardt Government Affairs, based on that firm’s work, as a paid foreign agent of the Republic of Turkey, to deny the Armenian Genocide and prevent the proper commemoration of this crime against humanity. The letter to Mayor Schaaf, in part, asserted that “It is our understanding that Gephardt Government Affairs, as a matter of public record, has enjoyed a six-figure contract ($160,000 a year) with the Port of Oakland. We appreciate that this contract was not granted during your term in office. However, we do find it unacceptable that the City of Oakland – which is home to a longstanding Armenian American community – the majority of whom have family who were either murdered or brutalized during the Armenian Genocide – has had a contractual relationship with a lobbying firm that profits from genocide denial. Such a relationship clearly falls far short of the humanitarian and ethical standards of the City of Oakland.”

“Dick Gephardt’s unethical work in denying the Armenian Genocide makes his firm persona non grata here in the State of California,” remarked ANCA-Western Region Chair Nora Hovsepian. “Thanks to the great work of our ANCA chapters in Los Angeles and the Bay Area – Gephardt and his firm are beginning to pay a real price for their denial of the Armenian Genocide. As far as the ANCA is concerned, no public agency in the United States and especially in the State of California, should be spending taxpayer dollars on an unethical lobbying outfit that makes money denying the murder of 1.5 million human beings,” Hovsepian emphasized.

Earlier this month, the Gephardt firm signed a new lobbying deal with the Republic of Turkey in which it will be paid $1.7 million from March through December 2015 to actively deny the Armenian Genocide, among other activities. Dick Gephardt has made a name for himself on Capitol Hill by trading on his congressional connections for his work on behalf of the Republic of Turkey. As documents filed with the U.S. Department of Justice under the Foreign Agent Registration Act (which regulates the lobbying activity of those who advocate on behalf of foreign interests in the United States) reveal, Gephardt himself has had to disclose the fact that he acts on Turkey’s behalf as an ardent opponent of legislative efforts to fully recognize the Armenian Genocide.

New York Times writer and author of “This Town” Mark Leibovich outed Gephardt in 2013 for his hypocrisy on the Armenian Genocide. In a television interview later that year, Bill Moyers asked Leibovich about Gephardt’s stand on the Armenian Genocide. “In the House [of Representatives] he [Gephardt] had supported a resolution condemning the Armenian Genocide of 1915. When he left Congress he was paid about $75,000 a month to oppose the resolution,” Moyers commented. Leibovich responded by sharing, “Yes. I guess the word genocide goes down a little easier at those rates.” Also in 2013, Christopher Buckley, the son of William F. Buckley, wrote a review of “This Town” in The New York Times in which he cited Gephardt’s genocide denial efforts. “There are a number of sanctimonious standout “formers” in Leibovich’s Congressional hall of shame, but just to name a few exemplars who gleefully inhabit ethical no-worry zones and execute brisk 180-­degree switcheroos on any issue, including the Armenian genocide, so long as it pays: Dick Gephardt…”

In his most recent anti-Armenian actions on Capitol Hill, Dick Gephardt aggressively lobbied against H.R. 4347 in the 113th Congress, a House measure to return Christian churches in Turkey to their rightful owners. Last year he also did the bidding of his lucrative Turkish Government client by fighting against a U.S. Senate resolution on the Armenian Genocide.

Despite Gephardt’s opposition, the Armenian Genocide bill advanced in the Senate Foreign Relations Committee in April of last year was ultimately adopted by the full committee by a vote of 12 to 5.

The move by the ANCA-WR to seek termination of LAWA’s contract with Gephardt and to ensure that his contract with the Port of Oakland was not renewed coincides with the launch of a nationwide campaign by a coalition of Armenian American groups, including the ANCA, to pressure Gephardt, former House Speaker Dennis Hastert (Dickstein Shapiro, LLC), Greenberg Traurig, Alpaytac, and LB International to stop advancing the Turkish  Government’s Armenian Genocide denial agenda or face public scrutiny  and protest. The effort was launched this past January with over 200  letters sent to Turkey’s lobbying firms and the top businesses, universities, and NGOs who use their services, urging them to promptly drop their association with Turkey’s genocide denial or end their relationships with these public relations firms. Among those receiving letters were PepsiCo, TIME Inc., Amazon, and the Chrysler Corporation, in addition to many others.

The Armenian National Committee of America-Western Region is the  largest and most influential Armenian American grassroots advocacy organization in the Western United States. Working in coordination  with a network of offices, chapters, and supporters throughout the  Western United States and affiliated organizations around the country,  the ANCA-WR advances the concerns of the Armenian American community on a broad range of issues.