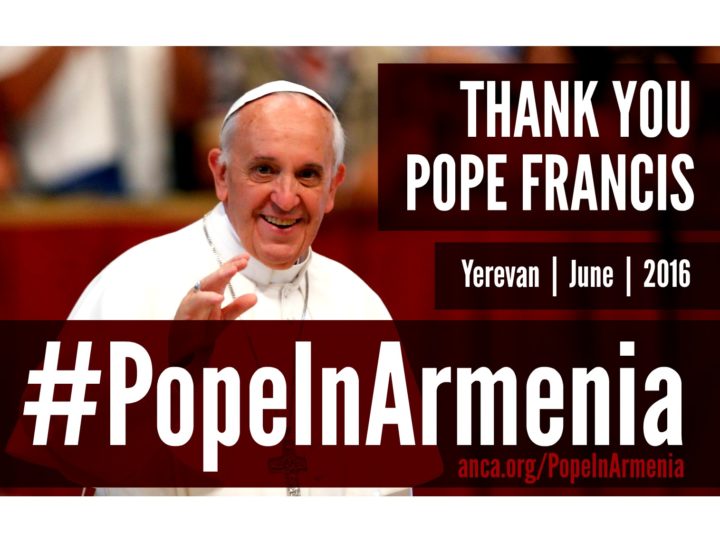 WASHINGTON, DC — Armenian Americans will be closely following His Holiness Pope Francis’ historic trip to Armenia this weekend, energized by his moral leadership during the Armenian Genocide Centennial last year and hopeful that his courage will inspire our U.S. President and Congress to end their complicity in Turkey’s genocide denial, reported the Armenian National Committee of America (ANCA).

A highlight of the Pontiff’s busy three day schedule in Armenia will be his visit to the Armenian Genocide Memorial (Tzitzernakaberd) on Saturday morning (local time), after which he will meet a dozen descendants of the 400 Armenian orphans who were rescued in 1915 and lodged at the papal Castel Gandolfo residence near Rome.

“The Pope’s prayers at the Armenian Genocide Memorial will echo around the world,” said ANCA Executive Director Aram Hamparian. “The presence of Pope Francis at the Armenian Genocide Memorial – over the strident objections of Turkey’s leaders – stands as a powerful moral testament against Ankara’s ongoing obstruction of justice for this crime. In bearing witness – before all the world – at this most sacred site, Pope Francis is openly challenging Turkey’s efforts to erase from history its massacre and exile of millions of Armenians, Assyrians, Greeks, and other ancient Christian nations from their biblical era homelands.”

Hamparian went on to share his hope that the Pope’s visit will inspire U.S. leaders to stop aiding and abetting Turkey’s century-long campaign of Genocide denial. “President Obama, Speaker Ryan and all our Congressional leaders would do well to follow the courageous moral leadership of Pope Francis in rejecting Ankara’s gag-rule and speaking honestly about Turkey’s near genocidal annihilation of the Christian Armenian nation,” explained Hamparian. “This visit by Pope Francis to the first Christian state both reflects and reinforces the Christian world’s solidarity with the Armenian people.”

In the weeks leading up to the Pope’s Armenia visit, the ANCA has announced a nationwide call-in campaign to House Speaker Paul Ryan (R-WI) to schedule a vote on the Armenian Genocide Truth and Justice Resolution (H.Res.154). The measure, which has some 70 cosponsors, highlights the U.S. prior record of Armenian Genocide affirmation and calls on President Obama to “work toward equitable, constructive, stable, and durable Armenian-Turkish relations based upon the Republic of Turkey’s full acknowledgment of the facts and ongoing consequences of the Armenian Genocide, and a fair, just, and comprehensive international resolution of this crime against humanity.”

The ANCA’s action alert on the topic is available at anca.org/speaker.

Prior to his election to the oval office, Obama was clear and unequivocal in promising to properly characterize Ottoman Turkey’s murder of more than 1.5 million Armenian men, women, and children between 1915 and 1923 as genocide. In a Jan. 19, 2008, statement, he wrote: “The facts are undeniable. An official policy that calls on diplomats to distort the historical facts is an untenable policy. As a senator, I strongly support passage of the Armenian Genocide Resolution (H.Res.106 and S.Res.106), and as president I will recognize the Armenian Genocide.”

President Obama has broken that pledge in annual Armenian Remembrance Day statements issued on or near April 24, the international day of commemoration of this crime.

Pope Francis reaffirmed the Armenian Genocide on April 12, 2015, during an unprecedented Vatican mass commemorating the 100th anniversary of that crime.

In remarks delivered at the opening of the commemorative mass, Pope Francis noted, “In the past century our human family has lived through three massive and unprecedented tragedies. The first, which is widely considered ‘the first genocide of the twentieth century’, struck your own Armenian people, the first Christian nation, as well as Catholic and Orthodox Syrians, Assyrians, Chaldeans and Greeks. Bishops and priests, religious, women and men, the elderly and even defenseless children and the infirm were murdered.”

Pope Francis went on to state that, “It is necessary, and indeed a duty, to honour their memory, for whenever memory fades, it means that evil allows wounds to fester. Concealing or denying evil is like allowing a wound to keep bleeding without bandaging it!”

Pope Francis’ knowledge and commemoration of the Armenian Genocide harken back to his years as Archbishop and, later, Cardinal, serving in his native Argentina, where he had a special relationship with the Armenian community. In a 2015 interview with Argentina’s Prensa Armenia, Archbishop Kissag Mouradian, Primate of the Armenian Apostolic Church for Argentina and Chile Republic, explained, “On April 24 we officiated ceremonies of dirge in the Cathedral of Buenos Aires, where he always addressed his words to the Armenian people. On one of these occasions he called on Turkey to recognize his crime to enhance the relationship and doing good to the Armenian people and the Turkish people.”

The Archbishop also noted that, on the 90th anniversary of the Armenian Genocide, Cardinal Bergoglio (now Pope Francis) requested the placement of a commemorative Armenian khatchkar (cross-stone) at the Metropolitan Cathedral of Buenos Aires.

The complete Prensa Armenia interview is available at: http://www.prensaarmenia.com.ar/2015/04/the-armenian-friend-of-pope-francis.html

The Vatican and Armenian Genocide Reaffirmation

On November 9, 2000, Pope John Paul II addressed the Armenian Genocide in a joint statement with Catholicos Karekin II, spiritual leader of the Armenian Apostolic Church, following a meeting in the Vatican between the two church leaders. “For both of us, the 20th century was marked by extreme violence. The Armenian genocide, which began the century, was a prologue to horrors that would follow. Two world wars, countless regional conflicts and deliberately organized campaigns of extermination took the lives of millions of faithful,” said the statement.

Catholicos Karekin II, who was in the Vatican on a four-day visit to promote closer relations between the Armenian Church and Catholic churches, invited the Pope to Armenia next year for the 1,700th anniversary of the official declaration of Armenian Christianity. The Pope returned to Karekin II relics of Saint Gregory the Illuminator, the founder of the Armenian Apostolic Church.

The full text of the joint statement is available here:
http://w2.vatican.va/content/john-paul-ii/en/speeches/2000/oct-dec/documents/hf_jp-ii_spe_20001109_john-paul-ii-karekin-ii.html

On September 27, 2001, on the third day of his historic trip to Armenia marking the 1700th Anniversary of the adoption of Christianity as Armenia’s state religion, Pope John Paul II and Catholicos Karekin II issued a joint declaration, stating that “The extermination of a million and a half Armenian Christians, in what is generally referred to as the first genocide of the Twentieth Century, and the subsequent annihilation of thousands under the former totalitarian regime are tragedies that still live in the memory of the present-day generation.” It went on to note that “These innocents who were butchered in vain have not been canonized, but many among them were certainly confessors and martyrs for the name of Christ.”

The full text of the joint declaration is available here:
https://w2.vatican.va/content/john-paul-ii/en/speeches/2001/september/documents/hf_jp-ii_spe_20010927_decl-jp-ii-karekin-ii.html

The Pope’s complete schedule in Armenia is available at:
http://en.radiovaticana.va/news/2016/06/18/pope_francis_official_schedule_for_armenia_visit_in_june/1229546

As His Holiness Pope Francis prepares for his historic June 24-26, 2016, visit to Armenia, the first nation to adopt Christianity as its state religion in 301 AD, following are some facts about the Pontif, the Vatican and issues of concern to the Armenian American community.

Among the highlights of Pope Francis’ trip is his visit to the Armenian Genocide Memorial (Tzitzernakaberd), after which he will meet a dozen descendants of the 400 Armenian orphans who were rescued in 1915 and lodged at the papal Castel Gandolfo residence near Rome.

His Holiness will be travelling to Georgia and Azerbaijan in early October, 2016.