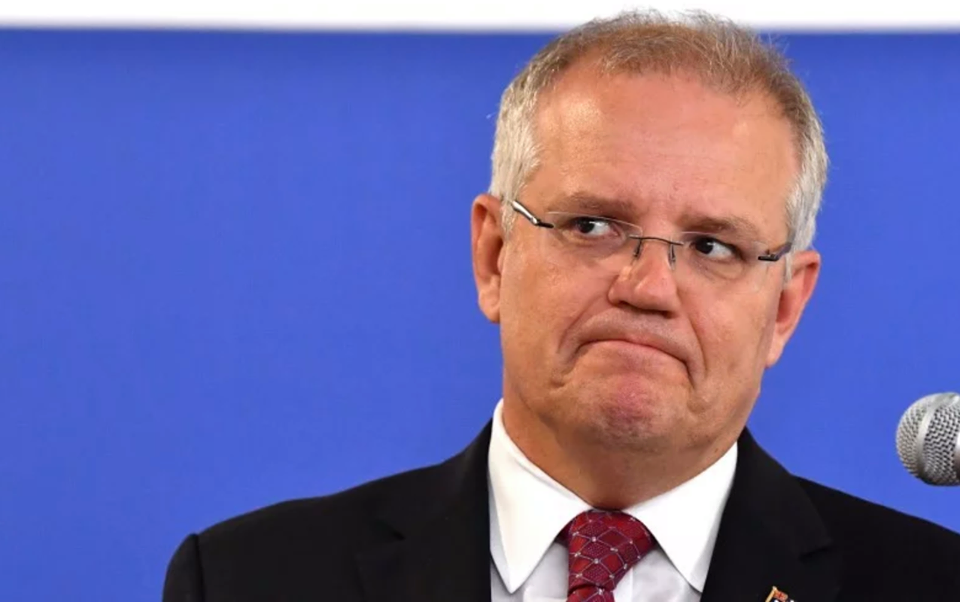 SYDNEY: Australia’s Prime Minister, Scott Morrison has sensationally admitted to bowing to pressure from a foreign dictatorship, when backflipping on his prior use of the word “genocide” when referring to the Armenian Genocide.

The Sydney Morning Herald has revealed that Morrison made the admission when answering questions from the media on what has become a controversial issue, covered by mass Australian media including leading radio broadcaster Alan Jones and the Nine Network of newspapers.

The Prime Minister’s statement to Armenian-Australians – marking the 104th anniversary of the systematic attempt to destroy the Armenian race – referred to the Armenian Genocide as “… the horrors that befell Armenian people at the end of the Ottoman Empire”.

This is in stark contrast to his speech to Parliament on 26th May 2011 – while in Opposition – when he said: “Today, as a member of this House, I join others in this place, and in parliaments around the world, to place on record that I believe the Armenian genocide was one of the greatest crimes against humanity … it is important that we recognise the Armenian genocide for what it was.”

Morrison told journalists on Wednesday that, despite using the word genocide “in the past as a private citizen”, as Prime Minister “I represent the views of the country”, seemingly forgetting that he had made that statement as a Member of Parliament, in Parliament.

Quite sensationally, he then linked his decision to avoid using the term to Australia’s Anzac Day commemoration service in Gallipoli, confirming long-held views that Australia was under a gag order by the Turkish dictatorship on this issue.

“We’ve been working closely with the Turkish government to ensure that we continue to have a very strong relationship that enables Australians, and New Zealanders for that matter, to make that pilgrimage,” Morrison said.

The Armenian National Committee of Australia (ANC-AU) has condemned this “shameful backflip” and the reasons behind it.

“There was serious hope from many that Prime Minister Scott Morrison will be the one to end Turkey’s gag rule on Australia by releasing an appropriate statement on the eve of the Armenian Genocide,” said ANC-AU Executive Director, Haig Kayserian. “Instead we have the Prime Minister admitting to have drank President Erdogan’s Kool-Aid.”

Kayserian called on the Returned and Services League of Australia (RSL) to act.

“We call on the RSL to condemn the implicit blackmail by the Turkish State in using the sacred graves of our ANZAC martyrs as hostages to force Australia and New Zealand to become complicit in Turkey’s shameful denial of the Armenian Genocide,” he said. “This level of foreign influence on Australian policy should be unacceptable to all Australians.”

“What would our ANZAC heroes think of our leaders of today in cowering to such blackmail? It is downright un-Australian. Furthermore, true friends do not resort to such threats and blackmail,” Kayserian added.

This was originally reported in an article by Michael Koziol for the The Sydney Morning Herald, which was titled “Armenian leaders snub Scott Morrison over ‘offensive backflip’ on genocide declaration”, referencing that the Prime Minister’s statement will not be read out.

2GB Radio’s Alan Jones, who is the highest rating broadcaster on Australian radio, spoke accurately and at length about the Armenian Genocide on his radio program on the morning of 24th April 2019, which marks the 104th anniversary of the 1915 massacres.

Discussing Prime Minister Morrison’s statement, Jones said: “In a surprising statement to a commemoration event today, the Prime Minister says Australia joins with the Armenian Diaspora to mourn and remember the horrors that befell the Armenian people at the end of the Ottoman Empire.”

“Mr. Morrison has used the word genocide before, and the local Armenian community will refuse to read out his statement with a spokesman saying the backflip is downright offensive and equates the genocide to a car crash. I think the Armenian people are correct.”

Alan Jones added: “Erdogan is not worth two bob. There’s no way in the world this bloke should be allowed in any way to influence Australian policy or what we have to say. We shouldn’t be pandering to him. It was a genocide all those years ago and the Armenian people are entitled to have respectful remembrance.” Listen here.

The Sydney Morning Herald then published an Op-Ed on ANZAC Day, authored by the former head of SBS Radio, former president of the Anti-Discrimination Board of NSW, and former chairman of the Community Relations Commission of NSW, Dr. Stepan Kerkyasharian. It is titled “Political leaders rightly snubbed for failing to recognise genocide”.

Kerkyasharian says: “The Armenian community of Australia has every right to refuse to convey messages from our federal leaders which so blatantly reflect hypocrisy and political cowardice. It is an insult to the memory of their mothers and fathers, grandmothers and grandfathers.”