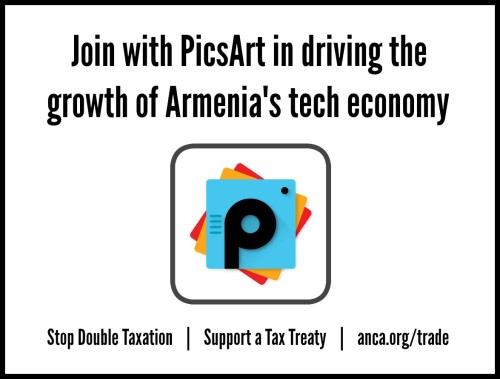 — Bilateral Accord Key to Driving Growth of Armenia’s Tech Economy

WASHINGTON, DC – Photo-editing, collage and drawing app, PicsArt – a Yerevan-based company with more than 250 million installations serving a global community of 65 million – has joined a growing list of corporations and Congressional leaders in calling on the Obama Administration to help facilitate the growth of Armenia’s burgeoning tech sector commerce with the United States by negotiating a bilateral Double Tax Treaty, reported the Armenian National Committee of America (ANCA).

In a letter sent to President Obama last week, PicsArt Chief Operations Officer and Co-Founder Artavazd Mehrabyan explained that “PicsArt and the many other IT start-ups in Armenia represent the cutting edge of U.S.-Armenia economic growth, driving the expansion of commercial partnerships and further reinforcing the enduring bonds of friendship that have long drawn together the Armenian and American peoples.” He went on to note that “to ensure serious, sustainable progress over the long term – we need to remove barriers to bilateral cooperation and put in place a clear legal framework for continued economic growth. A central element of such an effort must be a modern Tax Treaty that eliminates the threat of double taxation of corporations, investors and individuals that have business activities in both jurisdictions.”

PicsArt, which has offices in both Yerevan, Armenia and San Francisco, California, joins technology and global business leaders Microsoft, FedEx, NASDAQ, Marriott, Grant Thornton and host of U.S. and Armenia firms who have been on record for years supporting stronger bilateral economic relations efforts, including through a Trade and Investment Framework Agreement (TIFA), which was adopted in May, 2015, and a modern Double Tax Treaty.

In August of last year, senior ANCA officials met with U.S. Treasury Secretary Jacob Lew in Washington, DC to press for a new U.S.-Armenia Double Tax Treaty. The current treaty governing double taxation issues between the two countries is the 1973 U.S.-U.S.S.R. Tax Treaty, an outdated forty year-old accord. The lack of an updated double tax treaty between the United States and Armenia creates legal uncertainty that deters potential U.S. investors, diverts investment flows and disadvantages American businesses seeking to invest in the Republic of Armenia.

The ANCA has initiated a grassroots campaign urging the Secretary Lew to begin negotiations with Armenia. To take action, visit: anca.org/trade.

To learn more about PicsArt and download their mobile creativity and community app, please visit www.picsart.com

For a two-page ANCA brief on the benefits of a Tax Treaty, visit:
http://anca.org/assets/pdf/ANCA_Double_Tax_Treaty.pdf