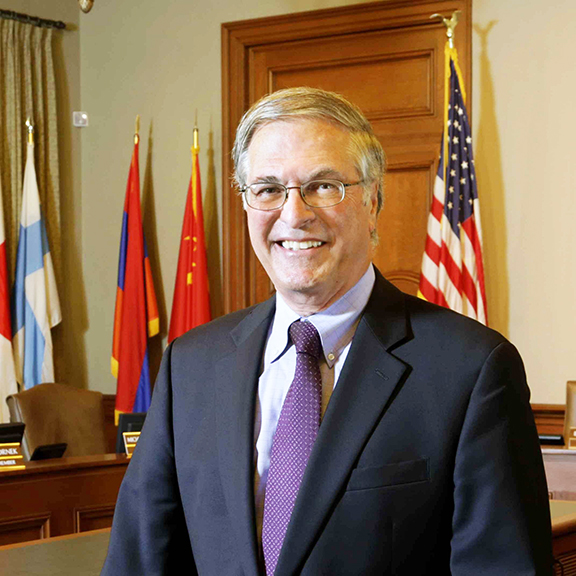 (ASBAREZ) PASADENA—After more than a year of planning by the City of Pasadena and the Pasadena Sister City Committee, and an official California delegation from Pasadena, led by city’s Mayor Terry Tornek are set to embark on an official visit to Armenia.

During their 11 day trip the delegation, will participate on an eigh-day in-depth visit to Armenia, followed by a three- day visit to Pasadena’s Sister City, Vanadzor, Armenia.

This will be the second such Pasadena City delegation to visit the Republic of Armenia, the first of which was hosted, by the ANCA Pasadena, back in July of 2004 and will include a special visit to Pasadena’s Sister City of Vanadzor. The Pasadena delegation will begin their tour of Armenia on August 31 and will return on September 10.

The delegation will also include Pasadena City Councilmember and Vice Mayor John J. Kennedy, along with several members of the Pasadena Sister Cities Committee, the Pasadena Unified School District Board of Education President Vruyr Boulghourjian and other local elected officials from the cities of Pasadena, Sierra Madre and Glendale, along with members of the Pasadena Chapter of the Armenian National Committee of America and other prominent community leaders, residents, supporters and friends.

The trip, initiated under the stewardship of Mayor Tornek will be the Mayor’s and many others first trip to Armenia. Mayor Tornek was elected to represent District 7 on the Pasadena City Council in April, 2009, was reelected in 2013 and was then elected as Mayor in April, 2015 and is serving out his first 4-year term as Pasadena’s first City-wide elected mayor.

In 2016, the Mayor was honored by the Pasadena ANCA as an exemplary public official for his diligent efforts in working closely with the Armenian community of Pasadena and help building bridges between the city’s diverse communities. Councilmember and Vice Mayor Kennedy was elected to represent District 3 on the Pasadena City Council in April 2013, was reelected to his second term in office in 2016, and was recently elected unanimously by his colleagues on the City Council to serve as the City’s Vice Mayor in May, 2017.

Established by the Pasadena City Council in August of 1960, the Pasadena Sister Cities Committee (PSCC) is an official committee of the City of Pasadena. Most of the organization’s programs are financed through fund raising efforts of the membership. Such funds are used to help entertain foreign visitors, to arrange cultural exchanges, and, most importantly, to benefit the student exchange programs.

The volunteer members have helped set a pace for the future by globally linking Pasadena with lasting friendships with our sister cities. This cross-cultural linking enriches each city with cultural, social, and economic benefits. Pasadena and its 5 sister cities of: Mishima, Japan (Established in 1957); Ludwigshafen, Germany (Established in 1948 pre-dates SCI); Jarvenpaa, Finland (Established in 1983); Xicheng District of Bejing, China (Established in 1999); and Vanadzor, Armenia (Established in 1991); aim to engage in mutually beneficial partnerships, through personal citizen visits and communicating a knowledge of Pasadena’s community, homes and schools and to promote an active group participation in the exchange of information and cultural and historic programs. Recently, the PSCC won the Sister Cities International’s (SCI) 2016 Innovation Award for Humanitarian Assistance for a city with a population between 100,001 and 500,000. The 2016 Sister Cities International Innovation Award for Humanitarian Assistance recognizes the accomplishments of outstanding community and individual sister city programs that promote peace through mutual respect, understanding, and cooperation.
The primary focus of the delegation’s visit though will be a visit to Pasadena’s Sister City, Vanadzor (vah-naht-zor). Vanadzor was established as Pasadena’s fourth Sister City in 1991. Previously known as Kirovakan, Gharak’ilisa, it is located in the northwestern region of Armenia, about 80 miles north of Yerevan. With a population of about 175,000, it is the third largest city in Armenia and the capital of the Lori Province. Known for its rich natural beauty and mineral springs, Vanadzor is undergoing a rebirth and revitalization after it was nearly destroyed in the 1988 earthquake that rocked Armenia. The City of Pasaden, in collaboration with the Pasadena Sister City Commission, has even erected on the City Hall grounds the ‘Sister City Trees’ with two plaques which mark a small orchard of trees across Garfield Street from City Hall, south of Holly Street and it is one of those plaques which commemorates the sister-city relationship between Pasadena and Vanadzor, Armenia.

“We are very excited about this historic second visit to Armenia and particularly to Vanadzor,” stated Pasadena ANC Chairman, Boghos (Bo) Patatian. “This will be our Chapter’s and City’s second visit to Vanadzor and will undoubtedly serve its mission to strengthen the ties between Vanatzor and Pasadena and give our public officials a better understanding of the rich Armenian culture and history. We thank the Mayor for taking on the initiative to organize this trip and building such a stellar delegation of participants, all of whom will unquestionably fulfill this organization’s and trip’s mission, which is to provide policymakers with a first-hand understanding of the rich Armenian history and culture while giving them an opportunity to meet with influential political, social and nonprofit leaders, there in the City’s Sister City of Vanadzor, and in so doing, to strengthen ties and discuss better means of collaboration between the two cities,” commented Patatian.

Upon their arrival to Armenia, the Mayor, Vice Mayor and others will be received by and meet with the meet with the Mayor of Yerevan and later visit the American University of Armenia, `Dzidzernagapert’ – the Armenian Genocide Monument, ‘Yerablur’ –the national military cemetery and burial place where bodies of Armenian liberators, military officers and soldiers who lost their lives during the Nagorno-Karabakh war are laid to rest, the U.S. Embassy in Armenia, and `Ecthmiadzin’ the Holy See of the Armenian Church – one of the oldest churches in the world and visit serval other museums, scenic destinations and historical landmarks.

Upon its arrival to Vanadzor, the Delegation will be received with an official reception by the Governor of the Lori Region, will visit Vanadzor Technology Center (VTC), the “Gloria” Sewing Factory, ride it famous Ropeway, and visit with the Prelacy of Diocese of Gougark. Also while in Vanadzor, the Delegation will attend an Official Reception in the Municipality of Vanadzor, visit to the Memorial of the Genocide Victims, visit kindergartens № 4,5, visit its “Football Academy” and attend a concert featuring the “Horovel” Song Dance Ensemble.

The Armenian National Committee of America – Pasadena Chapter is the oldest, largest and most influential Armenian-American grassroots organization of its kind within the City of Pasadena. Founded in 1979, the Pasadena ANCA advocates for the social, economic, cultural, and political rights of the city’s thriving Armenian-American community and promotes increased civic service and participation at the grassroots and public policy levels.