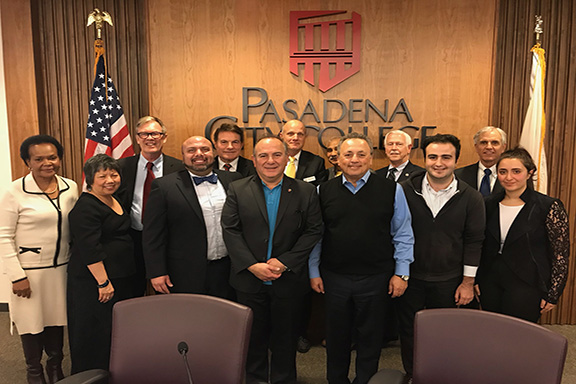 PASADENA – On Wednesday, May 23, in the Board of Trustees’ chambers at Pasadena City College’s Creveling Lounge, the college’s trustees unanimously passed and issued the Armenian Genocide Resolution, in commemoration of the 103rd anniversary of the heinous crimes that were perpetrated by the Turks against the Armenian Nation in 1915. The Armenian National Committee of America – Pasadena Chapter was there to receive the resolution as it has done in the past from the esteemed board of trustees of Pasadena City College.

The unanimity of the decision to pass the Genocide Resolution led by Board of Trustees President, Dr. Anthony R. Fellow, is testament to how the college views matters when it comes to abhorrent and unspeakable acts of injustice, especially the Armenian Genocide where, until this day, a just resolution has unfortunately yet to be countenanced by the United States government.

The ANCA – Pasadena Chapter would like to thank and pay tribute to the Pasadena City College Board of Trustees for their preeminent and unwavering commitment in standing by the Armenian American Community in its fight to seek truth and Justice, always.

The ANCA – Pasadena Chapter would like to express its sincere gratitude to the Pasadena City College ASA and its president, Daron Assadourian, for their staunch dedication to help in shedding further light on and for advancing the Armenian Cause.

A special gratitude goes to Student Trustee, Emily Ekshian, for her resolute, steadfast and tireless effort to ensure that the Board of Trustees coalesced to effectively and unanimously voice their approval to pass the Armenian Genocide Resolution.

The Armenian National Committee of America – Pasadena Chapter is the oldest, largest and most influential Armenian-American grassroots organization of its kind within the City of Pasadena. Founded in 1979, the Pasadena ANCA advocates for the social, economic, cultural, and political rights of the city’s thriving Armenian-American community and promotes increased civic service and participation at the grassroots and public policy levels.