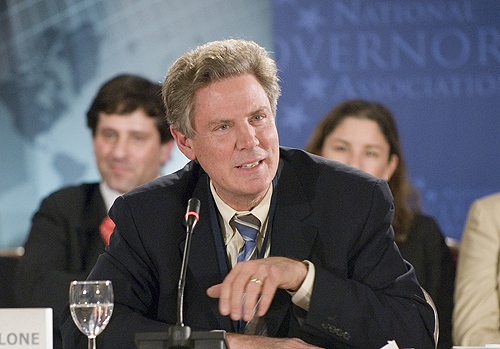 WASHINGTON—Congressman Frank Pallone Jr. (D-NJ), along with 27 members of Congress, sent a letter on Wednesday to Chairwoman Kay Granger and Ranking Member Nita Lowey of the House Appropriations Subcommittee on the Department of State, Foreign Operations and Related Programs, requesting increased funding for Armenia and Nagorno Karabakh.

In preparing the Fiscal Year 2015 State, Foreign Operations, and Related Programs Appropriations bill, the lawmakers are requesting that the subcommittee support increased funding for U.S. assistance to Armenia and Nagorno Karabakh.

Specifically, the representatives are asking the subcommittee to direct the U.S Agency for International Development (USAID) to spend at least $5 million in the fiscal year 2015 for humanitarian and development programs in Nagorno Karabakh and to ensure that at least $40 million in overall economic aid is appropriated for Armenia.

“We want to thank Congressmen Pallone and Grimm, and all their U.S. House colleagues who signed this letter, for helping to further strengthen the longstanding friendship of the American and Armenian peoples,” stated ANCA Executive Director Aram Hamparian. “We value their support for each of these foreign aid priorities and, more broadly, for their continued efforts to promote peace, stability, and democracy in this pivotal region of the world.”

The group also requested that the U.S. close distribution gaps in need-based aid to at-risk populations in Syria, including Armenians and Christian communities, fund sustainable job creation programs in the Samtskhe-Javakheti region of Georgia, and suspend military aid to Azerbaijan until their government ceases cross-border attacks into Nagorno Karabakh and Armenia and agrees to settle regional conflicts by peaceful means.

Below is the full text of the letter:

We are writing to underscore the importance of strengthening our ties with Armenia and empowering American diplomacy through continued U.S. assistance for Armenia, Nagorno Karabakh, the Samtskhe-Javakheti region of Georgia, and at-risk minorities in the Middle East. Given recent events, U.S. support in the region is critically important.

As you work with your colleagues in preparing the Fiscal Year 2015 State, Foreign Operations, and Related Programs Appropriations bill, we respectfully ask that you consider the following requests:

Assistance to Nagorno Karabakh:
Direct U.S. aid to Nagorno Karabakh has, for more than a decade and a half, represented a powerful investment in peace and an expression of America’s leadership in support of a negotiated and democratic resolution of security and status issues related to the Republic of Nagorno Karabakh. This direct aid has met pressing humanitarian needs, most recently providing for desperately needed clean water to families and the clearing of mines and unexploded ordnance from villages and farmlands. We thank the Subcommittee for its longstanding leadership in support of this aid program and for consistently including language in its report calling for U.S. assistance in Nagorno Karabakh.

We request that the Subcommittee include language directing USAID to spendat least $5 million in Fiscal Year 2015 for humanitarian and development programs in Nagorno Karabakh.

Suspension of U.S. military aid to Azerbaijan:
The oil-rich government of Azerbaijan, which routinely threatens to start a new war with Armenia, is listed as one of the most corrupt in the world, and has been ruled by the Aliyev family for much of the past half-century. Azerbaijan neither needs nor deserves American military aid.

Azerbaijan continues to launch cross-border attacks not only into Nagorno Karabakh, but also Armenia, a NATO Partnership for Peace country with troops serving in both Afghanistan and Kosovo. The President of Azerbaijan, Ilham Aliyev, regularly threatens to renew full-scale hostilities, refuses U.S. and international calls to pull back snipers, has made land claims against Armenia, and openly incites anti-Armenian hatred, including against Americans of Armenian descent. As was widely reported in the international media, on August 31, 2012, Azerbaijani President Ilham Aliyev personally pardoned an unrepentant, convicted murderer for killing a NATO Partnership for Peace participant because he was Armenian. Immediately after his pardon, this convicted murderer received a promotion in the Azerbaijani military, an apartment, and years of back pay for his prison time. The pardon was condemned around the world, including by President Obama, Members of Congress, European Parliament, OSCE, Council of Europe, and NATO.

We request that the Subcommittee suspend the appropriation of Fiscal Year 2015 U.S. military aid to Azerbaijan until its government ceases cross-border attacks, ends its threats of renewed war, and agrees to a settlement of regional conflicts through peaceful means.

Assistance to Armenia:
Armenia, a crucial ally in a strategic region of the world, has extended robust support for U.S.-led peace-keeping deployments in Afghanistan, Iraq, and Kosovo, and is cooperating with the U.S. on a broad range of regional and security challenges. Armenia is regularly ranked highly by the Wall Street Journal/ Heritage Foundation Index of Economic Freedom, and met the Fiscal Year 2014 eligibility criteria for the Millennium Challenge Corporation.

At the same time, the people of landlocked Armenia continue to face the devastating impact of Turkey and Azerbaijan’s dual economic blockades. Our assistance has played a vital role in helping alleviate these blockades and promoting Armenia’s free market system and democratic development.

We respectfully request that the Subcommittee include language within the Assistance for Europe, Eurasia and Central Asia Account ensuring that not less than $40 million in overall Fiscal Year 2015 economic aid (including Economic Support Fund, International Narcotics Control and Law Enforcement, and Global Health Programs), is appropriated for Armenia.

Assistance to Christian and other minority communities in the Middle East:
Distribution gaps in need-based international aid deliveries to Aleppo, Syria and other areas of the country have resulted in desperately needed food, medicine, and other relief supplies not reaching Armenians, Christian communities, and other at-risk and vulnerable minorities. At the same time, thousands from Syria, including many Christians, have sought safe-haven in Armenia. Armenia, a majority-Christian state, has received very modest U.S. and international relief and resettlement assistance, particularly compared with the per-capita level of such aid provided to Turkey, Jordan, and other regional countries.

We request that the Subcommittee instruct the State Department and USAID to put in place policies and programs to close gaps in the distribution of need-based aid to at-risk minority populations in Syria, including Armenians and other Christians.

We further ask that the Subcommittee instruct the State Department and USAID to ensure the allocation to Armenia of a proportional level of the U.S. and international aid supporting the efforts to regional states to resettle those fleeing from Syria.

Assistance to the Javakhk Region in Georgia:
We encourage the Subcommittee, as part of a robust U.S. aid package to Georgia, to expand on U.S. assistance previously targeted to the largely Armenian-populated region of Samtskhe-Javakheti in south-central Georgia, including funding for job-creation programs and ongoing improvements to transportation and communication infrastructure.

Over the past decade, USAID and the Millennium Challenge Corporation (MCC) have expanded their presence in Samtskhe-Javakheti in an effort to address core humanitarian and economic difficulties that face the population. Over the past several years, Americans of Armenian heritage have worked with USAID to leverage existing U.S. aid programs and to pursue public-private partnerships.

We request that the Subcommittee include language directing USAID to target at least 10 percent of Fiscal Year 2015 aid to Georgia to fund sustainable job-creation programs in Samtskhe-Javakheti.

Enhancing Section 907 of the FREEDOM Support Act:
Enacted in 1992, Section 907 of the FREEDOM Support Act stands as a statement of U.S. opposition to Azerbaijan’s blockades and other aggressive uses of force against Armenia and Nagorno Karabakh. Since its enactment, Azerbaijan has not lifted its illegal blockades and has ignored U.S. calls to cease its destabilizing threats.

In light of Baku’s actions, we urge the Subcommittee to add the following language narrowing the President’s waiver authority and requiring the following additional certification requirement: “In the last fiscal year, Azerbaijan has not taken hostile action, either through military force or incitement, including but not limited to threatening pronouncements by government officials toward Armenia or Nagorno Karabakh, and has both stated and demonstrated its commitment to pursuing a lasting peace with Armenia and Nagorno Karabakh through solely non-violent means.”

We respectfully request that the following report language be included: “In the interest of promoting a lasting and durable peace in the South Caucasus, the Nagorno Karabakh Republic must be reinstated into the OSCE Minsk Group peace process as a full negotiating partner.”

Thank you for your leadership on the Appropriations Subcommittee on State, Foreign Operations and Related Programs. We are grateful for your role in strengthening the relationship between the U.S. and Armenia, supporting aid to Nagorno Karabakh, and on all the issues we have raised.

We appreciate your consideration of these requests.