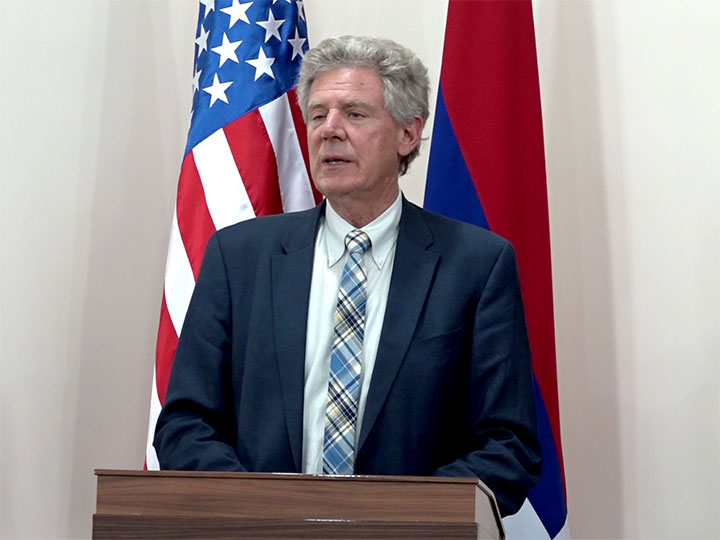 Pallone: “I Am Here Because I Want to Make It Clear That Artsakh Is a State, a Democratic Nation”

STEPANAKERT / SHUSHI, REPUBLIC OF ARTSAKH – Congressional Armenian Caucus founding Co-Chair Frank Pallone (D-NJ), upon his arrival today in Artsakh, underscored the importance of strengthening U.S. ties with Artsakh, an Armenian National Committee of America (ANCA) supported legislative priority that he is advancing in Washington through H.Res.190, a bipartisan measure seeking to remove barriers to expanded U.S.-Artsakh travel and communication.

“I am here because I want to make it clear that Artsakh is a state, a democratic nation,” Congressman Pallone told Republic of Artsakh National Assembly Chairman Ashot Ghulian and Parliamentary leaders. “And, it is very important to have as many contacts as possible between the United States and Artsakh.” The Congressman, earlier this year, introduced H.Res.190, which would also restore Artsakh’s role in all OSCE peace talks. The measure currently has 25 cosponsors.

“Congressman Pallone’s most recent visit to Artsakh shines a spotlight on H.Res.190,” said ANCA Executive Director Aram Hamparian. “His common-sense legislation paves the path to peace by clearing away senseless State Department restrictions that stand in the way of the very sort of dialogue and diplomacy needed to reach a durable and democratic resolution of status and security issues between Artsakh and Azerbaijan. We need more talk, more travel, more dialogue, and more diplomacy – not less. We need to let our diplomats be diplomats. We need to pass H.Res.190.”

Video of his arrival in Artsakh and visit Ghazanchetsots Church is available at:

Congressman Frank Pallone has traveled to Artsakh more than any other member of the U.S. Congress. In the days leading to his travel to Armenia and Artsakh, he was joined by Congressional Armenian Caucus Co-Chair Jackie Speier (D-CA) and Vice-Chair Adam Schiff (D-CA) in calling on the secretaries of Defense and State to immediately halt all U.S. military aid to Azerbaijan, conduct a review of Section 907, and report to Congress on all defense-related assistance to Azerbaijan.

Representatives Speier and Judy Chu (D-CA) are scheduled to visit Artsakh over the next several days.