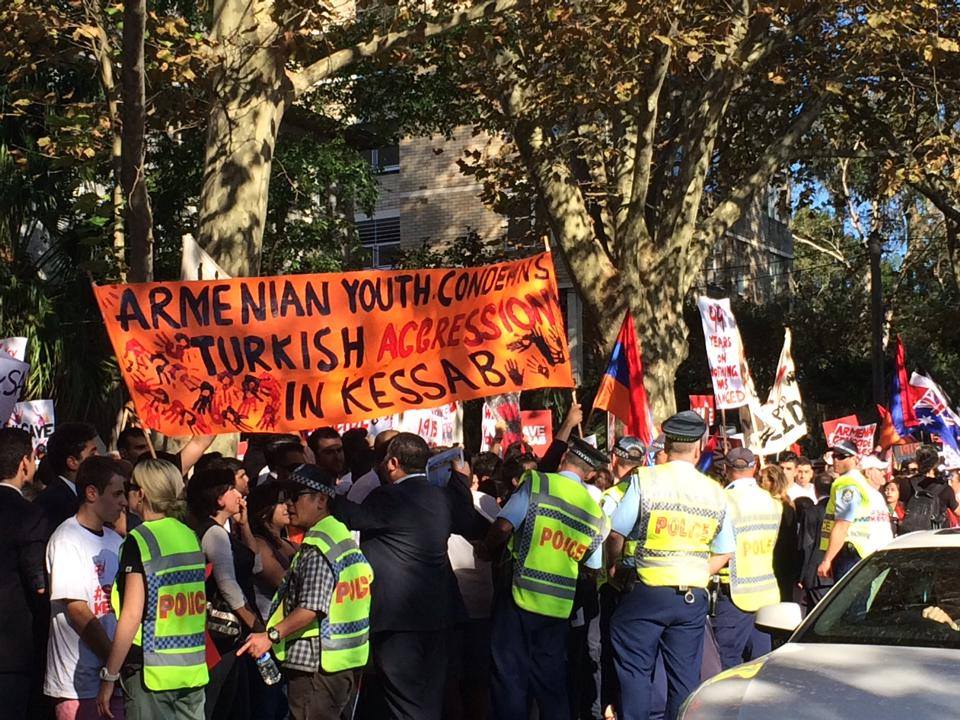 Over 1,000 Sydney Armenians protest to #SaveKessab

SYDNEY: Sydney Armenians gathered in what was one of the world’s biggest #SaveKessab protests, organised by the Armenian Youth Federation of Australia (AYF Australia). Over 1,000 activists, mostly youth, demanded that Turkey be held responsible for allowing access to Syrian rebels, who invaded the Armenian-populated town of Kessab in Syria last month.

Protesters were angered that Turkey, after committing the still-unpunished Armenian Genocide in 1915, could once again be responsible for the persecution of civilian Armenians, living peacefully in Kessab over centuries.

“It is simply unacceptable,” said AYF Australia chairperson, Aram Tufenkjian. “In this day and age, we cannot sit idly by while Turkey continues its unrepentant persecution of Armenians and other minorities.”

He added: “It is clear that until Turkey is held to account for the Armenian Genocide, it will continue to invade and persecute Armenians. We are here to hold them to account, to demand justice, and to show our solidarity with our brothers and sisters in Kessab, who have been forced to flee their homes.”

The large crowd, which included students from Galstaun College and members of the Armenian Apostolic and Armenian Catholic clergy, chanted:
“Turkey is guilty, Turkey must pay!”
“1915. Never Again!”
“Get your hands of Kessab!”
“Democracy. Ha Ha!”
“Shame, Turkey, Shame”

Speakers included members of the Armenian National Committee of Australia (ANC Australia) and AYF Australia, while a letter from students of Galstaun College was hand-delivered to the Turkish Consul General of NSW through the Australian Federal Police in attendance.

There was a small Turkish counter-protest, which consisted of members of the local community attempting to disrupt the Armenian protest by blowing on whistles.

ANC Australia Executive Director, Vache Kahramanian said: “Our protest is not against the Turkish people of Australia, it is held at the Consulate because we are protesting against a government with blood on its hands. The blood of our ancestors, whose murders they deny was committed by their predecessors. And the blood of Kessab Armenians, who have lost their homes to flee slaughter due to Turkey allowing extremists into the region through its border.”

Some photos from the protest are below, while more pictures are available at ANC Australia’s Facebook page. Video footage will be released in coming days.