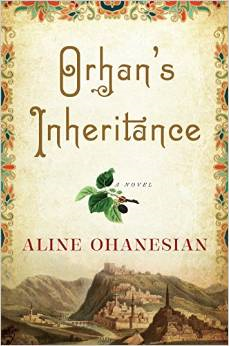 SANTA ANA, Calif.—On Sunday, March 15, the Armenian National Committee of America (ANCA) Orange County chapter hosted an afternoon with Aline Ohanesian, author of the new book “Orhan’s Inheritance,” at the Orange County Armenian Center. Over 100 community members gathered to hear Ohanesian discuss her debut novel centered on the experiences of two families during and after the Armenian Genocide.

Ohanesian shared her process leading up to writing the book and recounted her travels to present day Turkey to visit the villages and towns which, historically and prior to the Genocide, had been populated predominantly by Armenians. Ohanesian also shared her personal experiences of searching for hidden Armenians in Sivas (Sepastia) and Pirkinik, the village where Armenian Poet Daniel Varoujan was born.

Ohanesian’s novel has received extensive press and praise including a Kirkus Starred Review, a rare occurrence in literary circles. In addition, the American Bookseller Association has selected “Orhan’s Inheritance” as the No. 1 Indie Pick for April 2015, situating this Armenian Genocide novel, front and center, in thousands of independent book stores across the country in the upcoming months. Barnes & Noble has also selected Ohanesian as their Discover Great New Writers pick for Summer 2015. The novel is currently being translated into Italian, Hebrew, Bulgarian, among other languages, and has a release date of April 7, 2015. Ohanesian was a finalist for the prestigious PEN Bellwether Award for Socially Engaged Fiction and the Glimmer Train Award for Best New Writers.

The ANCA is the largest and most influential Armenian American grassroots political organization in the United States. Working in coordination with a network of offices, chapters, and supporters throughout the United States and affiliated organizations around the world, the ANCA actively advances the concerns of the Armenian American community on a broad range of issues.