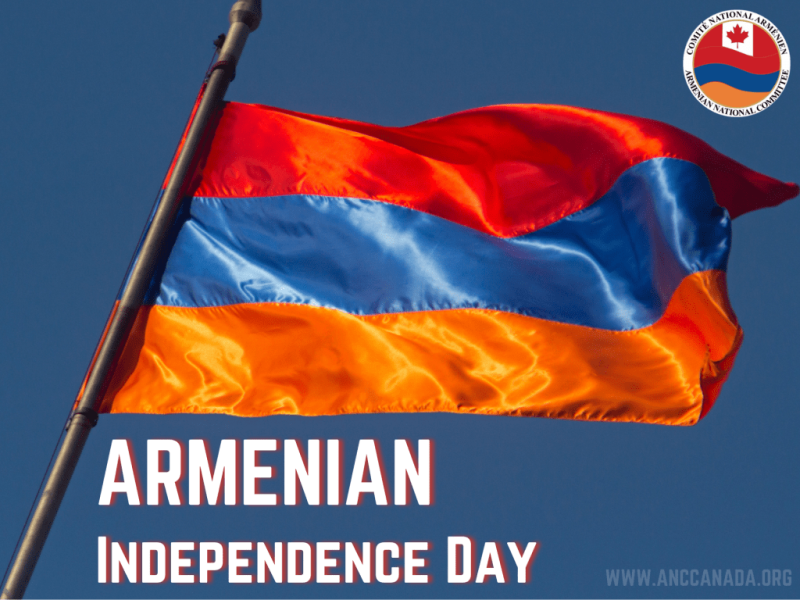 On Armenian Independence Day, the ANCC Presses Ottawa to Establish an Embassy in Yerevan

(OTTAWA – September 21, 2021) – Today, the Armenian National Committee of Canada (ANCC) is joining Armenians in Canada and around the world in celebrating the 30th anniversary of the independence of the Republic of Armenia.

On September 21, 1991 – after seventy years of Soviet dominance, Armenia regained its independence and rebuilt a modern-day republic, against a backdrop of enormous socio-economic and security challenges.

“While we are proud of the great strides achieved by the Republic of Armenia over the course of the last three decades, we remain deeply concerned by the ongoing security challenges faced by the Armenian people and the never-ending aggression of Turkey and Azerbaijan,” said Hrag Tarakdjian, Co-President of the ANCC.

Years of stalled negotiations, unchecked Turkish-Azerbaijani warmongering and harrowing indifference from the international community resulted in last year’s Turkish-backed Azerbaijani aggression against the Republics of Armenia and Artsakh, ending in an egregious ceasefire announcement that left Armenia and Artsakh facing renewed diplomatic and security challenges.

Despite the gradual advancement of bilateral relations between Canada and Armenia since 1991, Canada remains the only G7 country that does not maintain a permanent diplomatic mission in Yerevan, significantly limiting Canada’s efforts to substantially help Armenia address its challenges and consolidate its democratic progress.

This absence was particularly pronounced during last year’s 44-day war in Artsakh, where the Canadian manufactured WESCAM avionics were found to be used on illegally supplied Turkish drones.

“The fact that Canada was effectively absent from the region significantly limited Ottawa’s diplomatic efforts, while clouding the judgement of certain decision makers who issued the reckless exemptions for the WESCAM avionics,” said Shahen Mirakian, Co-President of the ANCC.

The war and its aftermath, coupled with many other regional challenges and opportunities are potent signals that it is high time for Canada to finally establish an embassy in Yerevan and commit to strengthening Ottawa’s role in the South Caucasus.