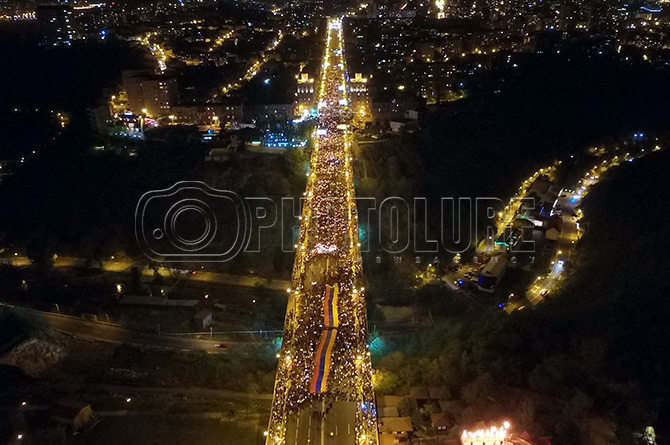 (ARMENIAN WEEKLY) ISTANBUL, Turkey—Turkish President Recep Tayyip Erdogan released a message on April 24 offering his condolences to the relatives of “Ottoman Armenians, who lost their lives under the tragic conditions of the First World War.” The message has been strongly criticized by official Yerevan as “another failed manifestation of denialism.” Acting Armenian Patriarch Aram Ateşyan read Erdogan’s message during the April 24 commemoration ceremony held in Surp Asdvadzadzin Church, located in Istanbul’s Kumkapı district.

“I welcome this commemoration which is taking place once again in Turkey, the most meaningful place to share the grief endured by the Ottoman Armenians, as well as to honor their memories,” read Erdogan’s message, which was released both in Armenian and in Turkish.

“In the lands of Anatolia, where humanitarian duties are never neglected and happiness and grief are sincerely shared, the sense of conscience and justice are held above all,” continued Erdogan in the statement, as reported by Turkey’s Daily Sabah, which also noted that the message referred to the “culture of cohabitation between Turks and Armenians” that would always be remembered.

Erdogan’s denialist message then went on to warn against “politicizing history,” and made reference to “common history” and “similar traditions.”

“We will never give up working for amity and peace against those who try to politicize history through a bitter rhetoric of hate and enmity and strive to alienate the two neighboring nations, who are bound with their common history and their similar traditions,” said Erdogan in the statement. “With this in mind, I once again commemorate the Ottoman Armenians who passed away and extend my condolences to their children and grandchildren.”

Armenia’s Deputy Foreign Minister Shavarsh Kocharyan was quick to call Erdogan’s statement an explicit form of genocide denial and a way to rid his country of any responsibility of the crime, during a press conference on April 25.

“The message issued by the president of Turkey on the occasion of April 24 is yet another failed manifestation of denialism, an explicit attempt to put the responsibility for the genocide committed by the authorities of the Ottoman Empire against the Armenians on the Armenians themselves. Turkey continues its efforts towards equalizing the victims of war and those who became victims of genocide pre-planned and perpetrated on the state level. Turkey’s denialism further deepens the gap between the Armenian and Turkish people, while the best way to fill it is facing history and repentance,” Kocharyan said during the press conference, as reported by Armenia’s arminfo.am news outlet.

Also quick to criticize Erdogan’s comments was Giro Manoyan, a member of the Armenian Revolutionary Federation – Dashnaktsutyun (ARFD) Bureau and director of its International Secretariat (ANC – International), who in a press conference on April 25 said that the message was just another example of Turkey’s policy of state denial. “The fact of committing a crime is ignored by the state, which indicates that no change in Turkey’s policy has happened,” Manoyan said.

Speaking to the Armenian Weekly, Armenian National Committee of America (ANCA) Executive Director Aram Hamparian said that while Erdogan speaks of sharing Armenian pain, he is actually celebrating Armenian suffering. “With his ally [Azerbaijani President] Ilham Aliyev, Erdogan’s demonizing Armenians, inciting toxic hatred and irrational fear, perpetuating the deranged and dangerous doctrine that Turkey, having acted legitimately in 1915 to defend itself from an Armenian threat, reserves for itself the right to do so all over again,” Hamparian said.

“We are today, in both Ankara and Baku seeing the early warning signs of renewed anti-Armenian aggression, the unmistakable red-flags of new atrocities,” he added.

On April 25, Aliyev hosted a dinner in honor of Erdogan. The Turkish president is in Baku to attend the 7th Global Forum of the United Nations Alliance of Civilizations. According to Erdogan’s official website, during the meeting the two heads of state “stressed” the notion of “One nation, two states” in their discussion of cooperation in the field of energy.