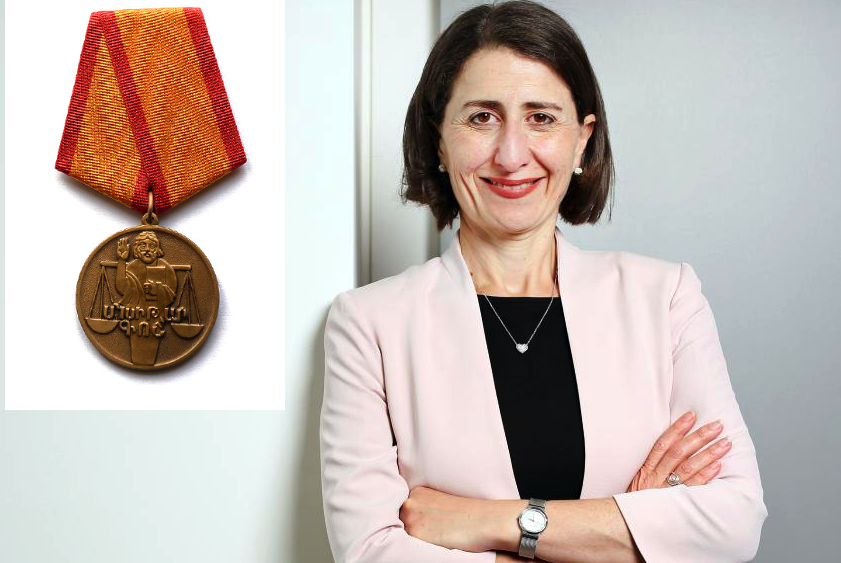 YEREVAN: The Premier of Australia’s largest state of New South Wales, Gladys Berejiklian has been awarded the prestigious Mkhitar Gosh Medal by the President of the Republic of Armenia, Serzh Sargsyan as part of Independence Day honourees announced on 21st September, 2017.

The Mkhitar Gosh Medal is awarded for “outstanding state and social-political activities, as well as for significant services in the spheres of diplomacy, law and political science.”

Berejiklian, the granddaughter of Armenian Genocide survivors, became the first Armenian-Australian Premier of a state in January 2017. She replaced retiring former Premier Mike Baird after having served as Treasurer of NSW under his leadership.

Berejiklian has always excelled in political leadership, from her days as head of the Young Liberals to becoming the first female member of her party to be chosen to lead a state of 7.5 million people.

The Armenian National Committee of Australia (ANC-AU) have congratulated Premier Berejiklian on receiving the Presidential honour from Armenia, which she will collect in person in due course.

“We congratulate Premier Berejiklian on this well-deserved honour,” said ANC-AU Honorary Chairman, Greg Soghomonian. “The Premier has always been THE upstanding public representative of her Armenian constituents, as well as her greater constituencies, regardless of what role she has served in.”

Soghomonian added: “Premier Berejiklian has always promoted her roots; she has battled for justice for the Armenian Genocide and for the rights to self-determination of Armenians in Artsakh. She has visited Armenia, including as a leading member of a political delegation the Armenian National Committee of Australia hosted in 2013.”

A former National Board member of ANC-AU, Berejiklian has been involved in many community Armenian community organisations since her youth.

Since her election as the NSW State Member for Willoughby in 2003, Berejiklian has been instrumental in representing Armenian community concerns in Parliament and educating her fellow parliamentarians on issues of importance, including Federal Australian recognition of the Armenian Genocide and the rights to self-determination of Armenians of the Republic of Nagorno Karabakh.

The State of NSW has twice recognised the Armenian Genocide and has a Khatchkar in the Parliament House’s Peace Garden in memory of the 1.5 million Armenians who were massacred at the hands of the Ottoman Empire in 1915. NSW has also recognised the rights to self-determination for the Armenians of the Republic of Nagorno Karabakh.

Berejiklian was instrumental in helping ANC-AU organise the visit to Armenia and Nagorno Karabakh by a delegation of politicians in 2013. This visit to Nagorno Karabakh earned her a place on Azerbaijan’s persona-non-grata list, along with her fellow delegation members.

The Mkhitar Gosh Medal adds to Berejiklian’s Armenian honours, which include the Armenian-Australian Community’s Friend of the Year by ANC-AU, as well as the Medal of Gratitude by the President of the Republic of Artsakh (Nagorno Karabakh), Bako Sahakyan.