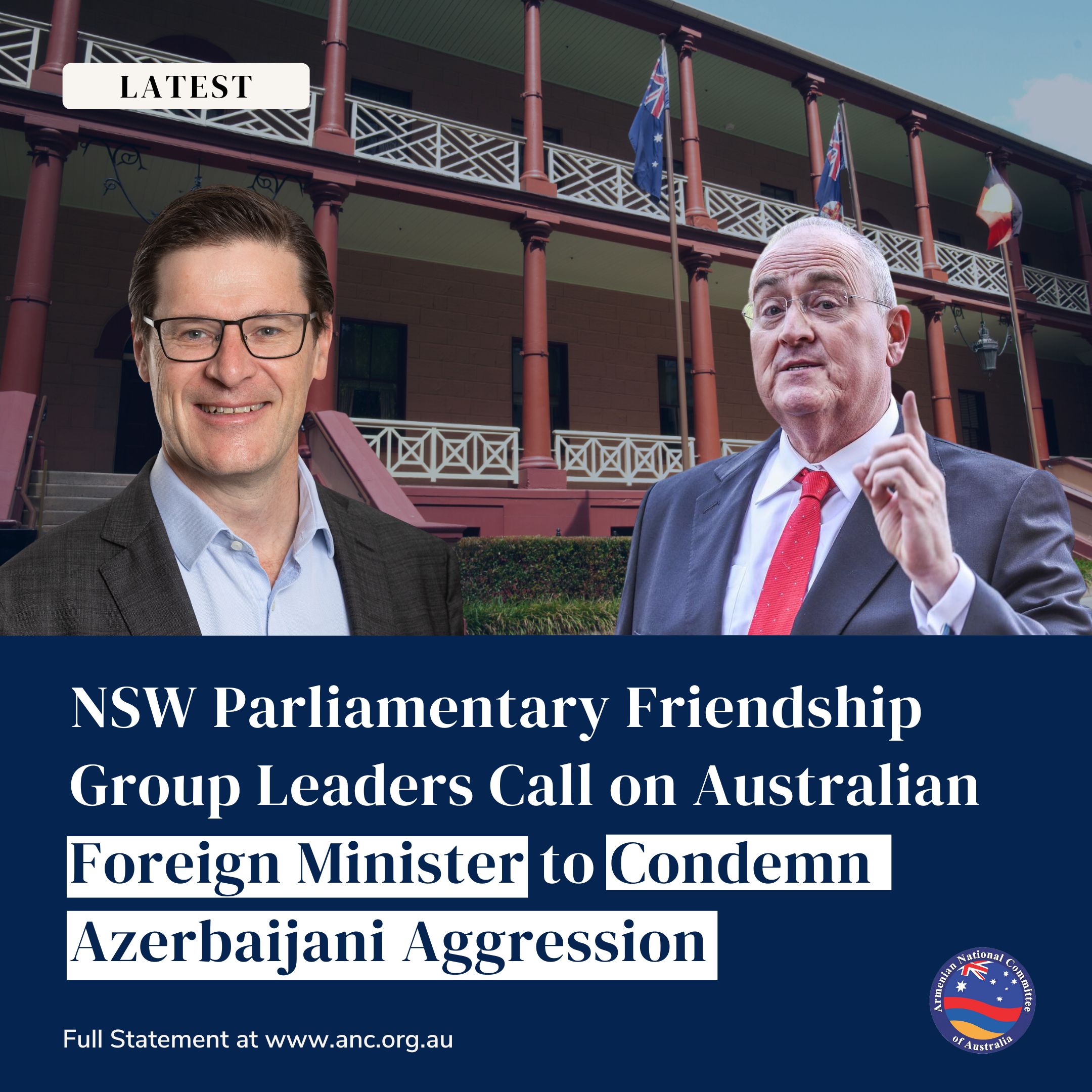 Member for Davidson and Speaker of the New South Wales Legislative Assembly, the Hon. Jonathan O’Dea and Member of the Legislative Council, the Hon. Walt Secord––who are Chair and Vice-Chair of the Armenia-Australia Friendship Group––raised concern over the latest unprovoked ceasefire violation committed by Azerbaijan.

Significantly, their letter voiced the bipartisan group’s objection over the targeted attacks against civilian settlements in Martuni, and attempts by Azerbaijan to cross the predetermined line of contact as determined by the November 2020 trilateral agreement, violating several fundamental human rights, resulting in the death of two Armenian servicemen and leaving 19 wounded.

The letter co-signed by O’Dea and Secord read: “The Russian Defence Ministry and its peacekeeping contingents stationed in Artsakh verified on Tuesday that the attacks were launched by Azerbaijani Armed Forces using a range of weapons. Azerbaijan’s Defence Ministry even boasted about their attacks on video via social media.”

ANC-AU Executive Director, Michael Kolokossian said: “Azerbaijan’s criminal behaviour and use of force is the most significant violation of the ceasefire agreement recorded since the end of the 2020 Nagorno Karabakh war, and through this brute force has cornered the Republics of Armenia and Artsakh into concessions that go beyond the scope of the November 9 ceasefire agreement, specifically the closure of the only land corridor between Artsakh and Armenia.”

This new wave of aggression has resulted in the forced displacement and ethnic cleansing of thousands of Armenians from the villages of Berdzor and Aghavno, located inside the Berdzor (Lachin) corridor, which represents a clear violation of Article 7, Section 1(d) of the Rome Statute of the International Criminal Court, prohibiting the “deportation or forcible transfer of population”.

“On behalf of the Armenian-Australian community, we thank Mr Jonathan O’Dea and Mr Walt Secord for joining many international political leaders, who seek to defend the human rights of the people of Nagorno Karabakh, by stopping Azerbaijan’s aggression against the self-determined Republic of Artsakh,” added Kolokossian.

“The autocratic regime of Azerbaijan has consistently proven that it will terrorise the indigenous Armenians of Artsakh. It has not returned Armenian POWs, it has not withdrawn from the sovereign borders of Armenia, it exacerbates the humanitarian crisis in the region by cutting off natural gas supplies between Artsakh and Armenia, and has now conducted aggressive military operations. These are actions of a criminal state, emboldened by the international community’s silence and ‘both side-ist’ rhetoric, which this statement exposes as false and dangerous.”

Kolokossian added: “Australia must rightfully champion a different path, by publicly speaking out against Azerbaijan’s unprovoked aggressions and upholding the values of truth, justice and international law.”