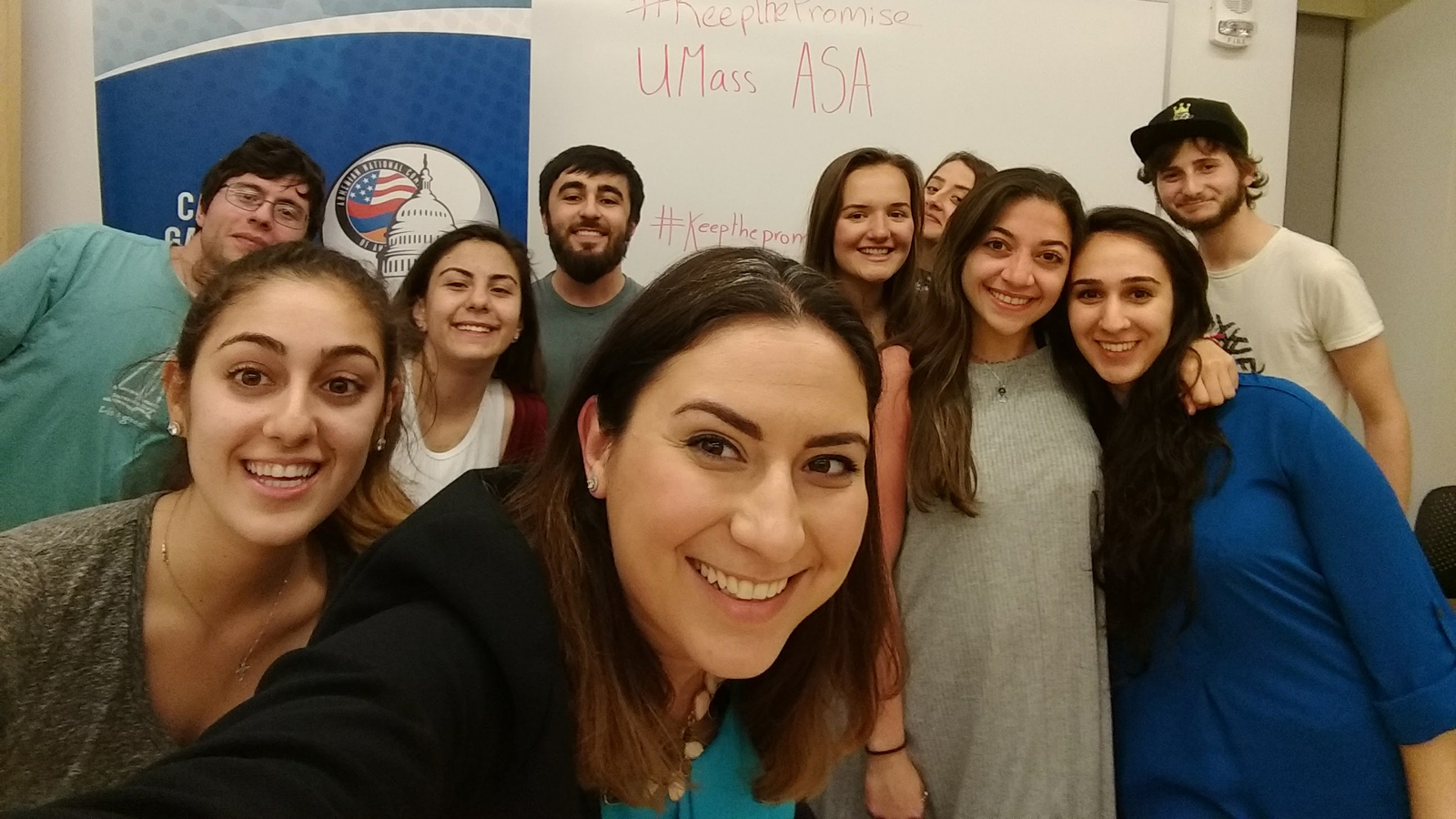 ANCA CGP Program Director Tereza Yerimyan traveled to Massachusetts and Rhode Island for presentations hosted by Armenian Students Associations at Tufts University, University of Massachusetts Amherst, and Northeastern University, where students from Boston College, Emmanuel College, Framingham State, and Wentworth Institute of Technology joined in the discussion. Individual meetings were held with students from Harvard, Brown, and Boston University. The New England visits are part of a nationwide tour in the run-up to the June 1st application deadline for the Fall, 2017, session of the ANCA CGP.

To learn more about the program and to apply, visit: anca.org/gateway

“It was inspiring to engage with so many talented Armenian American university students on campuses big and small to discuss the types of public policy and other career development assistance the ANCA offers,” explained Yerimyan. “In each of the meetings, I saw the faces of future members of Congress, U.S. diplomats, economists, journalists, non-profit leaders – perhaps even a future U.S. President. Everyone needs a strong start and a helping hand in their professional lives, and the ANCA Hovig Apo Saghdejian Capital Gateway Program is proud to provide the resources that will help our youth reach their fullest potential in government, public policy, politics, and media.”

Students attending the presentations asked a broad range of questions about the ANCA’s internship and post-graduate career development programs and appreciated Yerimyan’s straight talk about the challenges and opportunities available in the nation’s capital coupled with examples of ANCA CGP success stories.

“Coming from a small ASA chapter, Tereza’s presentation really helped convey the extraordinary heights that Armenians can and have reached, both nationally and globally,” explained UMass Amherst ASA Vice President Rita Bahnan. “Many students simply need someone to relate to – a personal connection – in order to spark an interest. Tereza did a terrific job of proving that you do not need to have an Armenian-invested upbringing to take part in professional development opportunities like the Gateway program.”

“The ANCA Capital Gateway Program is a flagship initiative to increase the quality and quantity of Armenian American public policy professionals in the nation’s capital, working on Capitol Hill, K Street, the media as well for government institutions and non-governmental organizations,” explained Mesrobian. “Over the past decade, the ANCA CGP has delivered win-win solutions, consistently empowered qualified young professionals to landed good jobs and thrive professionally in Washington, DC. In helping launching their careers, we leverage our community’s presence in the nation’s capital. We look forward to building upon our success.”

A video snapshot of Yerimyan’s visits is available on the ANCA YouTube channel at:
https://www.youtube.com/watch?v=e0oFl2zlLZk

Photos from the campus and community visits are available on the ANCA Facebook page at:
https://www.facebook.com/pg/ancagrassroots/photos/?tab=album&album_id=10154726476726859

Launched in 2003 with a founding grant by the Cafesjian Family Foundation, the ANCA CGP has helped over 150 Armenian American professionals from across the U.S. explore career prospects in Washington DC. Gateway Program fellows are offered three months of free housing at the ANCA’s Aramian House, located in the heart of Washington, DC in the Dupont Circle neighborhood, just blocks from the ANCA offices. The Capital Gateway Program Advisory Committee (CGPAC), comprised of a rotating group of program alumni, coordinates a series of career placement workshops on a range of issues including resume and cover letter preparation, effective interview strategies and networking. The CGPAC also connects fellows with mentors most closely aligned with their career goals for one-on-one advice and encouragement.

The ANCA CGP is named after Hovig Apo Saghdejian, a beloved young community leader who lost his life in a tragic car accident in 2005 and whose eternal memory continues to inspire new generations of Armenian Americans. His family generously established the Hovig Apo Saghdejian Memorial Fund and, over the past decade, have played a vital role in the expansion of the program. Substantial support has also been provided by longtime ANCA benefactors Mr. and Mrs. Frank and Barbara Hekimian and the Armenian American Veterans Post of Milford, Massachusetts (AAVO).

Established in 1986, the ANCA Leo Sarkisian Summer Internship (ANCA-LSI) program, provides student leaders and activists an opportunity to participate in an eight week intensive program designed to give them the tools necessary to effectively advance issues of concern to the Armenian American community on the federal, state and local level. Named in memory of the late ANCA Eastern U.S. community leader who spearheaded grassroots activism to advance the Armenian Cause for more than four decades, the Leo Sarkisian program now has hundreds of alumni across the world, spreading the message of truth and justice for the Armenian Genocide, freedom for Artsakh, and a secure, prosperous, and democratic Armenian homeland.

The 2015 purchase of The Aramian House was made possible through a generous donation by the family of the late community leader and philanthropist Martha Aramian of Providence, Rhode Island. The Aramian family – led by sisters Sue, Margo, and the late Martha – have long been among the most generous benefactors of ANCA programs as well as of charitable projects in the Armenian homeland and the Diaspora.