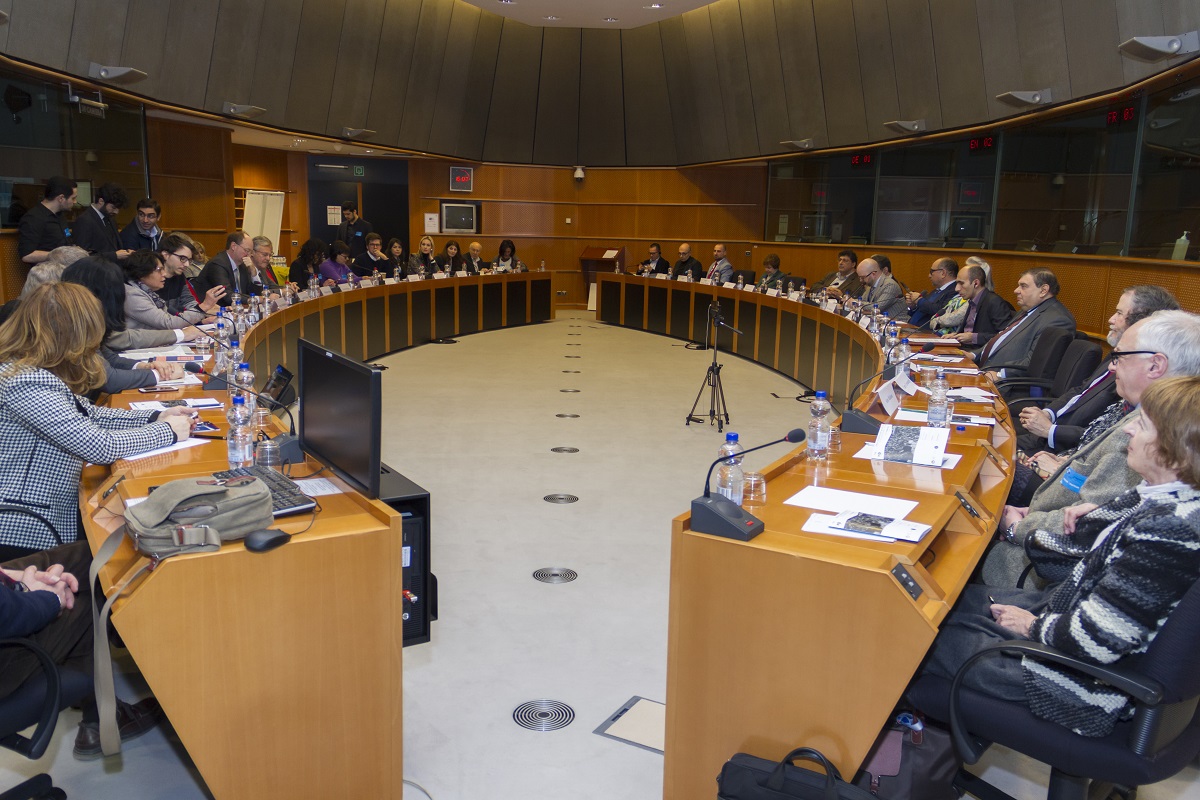 On February 27 the European Parliament deputies Michèle Rivasi (Verts/A LE) and Lars Adaktusson (EPP) hosted a public debate featuring prominent international scholars and diplomats who examined developments in international law, the status of the negotiations, and recommendations for achieving a peaceful resolution in Nagorno Karabakh (Artsakh).
]

Held at the European Parliament, the debate reviewed the findings of a colloquium held on Feb. 26-27 at the Center for European Policy Studies (CEPS), with the participation of over a dozen distinguished international law experts and former diplomats. The colloquium was co-organized by the Armenian Legal Center for Justice and Human Rights and the Tufenkian Foundation.
The findings of the colloquium included the following:

– Nagorno Karabakh must be the primary subject and not the object of the peace process;
– Under well-established international legal precedents, people, including those in Nagorno Karabakh, have the right to declare independence;
– Under international law there is a duty not to respond with violence to a declaration of independence;
– Nagorno Karabakh is a functioning state based on the concept of earned sovereignty, since it has institutional capacity, a democratically elected government, control of its borders and a functioning civil society;
– International community should actively engage with Nagorno Karabakh regardless of its status;
– International law provides a framework, but by itself cannot serve as sole tool for resolving conflicts, one cannot ignore the role politics plays in a conflict resolution;
– Confidence-building is a key tool to peace and a final resolution;
– Escalation of Armenophobic rhetoric and war-mongering are not acceptable and must be discouraged, incitement to violence and hatred is prohibited by international law.

During his presentation Dr. de Zayas stressed that self-determination of peoples often misinterpreted as destabilizing, is in fact a crucial component of regional and international stability. Commenting on the four-day war in April 2016, he noted: “Azerbaijan’s aggression in April 2016 constituted a breach of peace and must be condemned as a violation of the UN Charter.”

“Failure to adequately develop a plan to resolve self-determination movements is deadly,” explained Williams. He went on to propose the concept of “earned sovereignty” as a crucial mechanism that would prevent the deadly conflict. Earned sovereignty would require de facto states to build functioning state institutions and democracies rooted in respect for human rights before gaining recognition.

Dr. Markedonov, who provided an overview of recent developments, stated that the recent escalations of violence and war rhetoric has set the sides apart, making a negotiated settlement even more difficult. He also cautioned against the current focus only on the Karabakh-Azerbaijan border, since “one more important challenge is along the Armenia-Azerbaijan border which is not contested territory,” but experiences ceasefire violations.

Deputy Foreign Minister of the Artsakh Republic Aleksanyan noted, “Nagorno Karabakh is not merely a name of a conflict, it is a place where people live. These people were destined to fight for their right to live.” As proof of Artsakh’s determination to build a strong democratic state, Aleksanyan emphasized that the country has unilaterally signed several human rights treaties such as the Universal Declaration of Human Rights, Geneva Conventions, and the International Covenant on Civil and Political Rights.

The conference participants agreed that Nagorno Karabakh has a very strong claim for self-governance and that international community should become more heavily engaged with Nagorno Karabakh and the peace process to facilitate an appropriate solution to the conflict.

Video of the debate is available here: