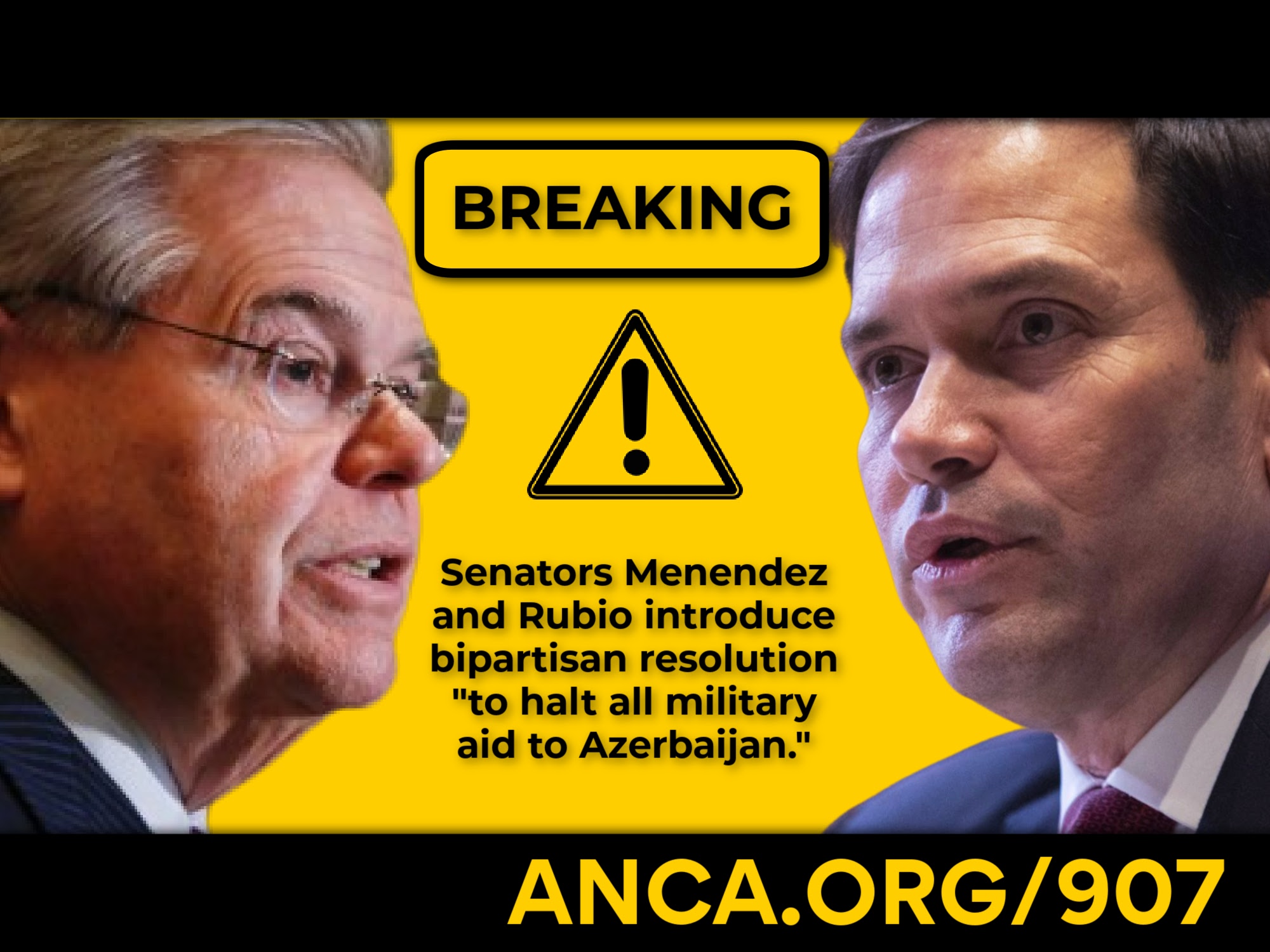 “Azerbaijan’s renewed assault on Armenian territory and callous targeting of civilian infrastructure is a horrifying show of disregard for human life,” Chairman Menendez said. “As communities across the region, including in Kapan, Goris, Jermuk, Vardenis, and Tchakaten suffer at the hands of the Aliyev regime, the United States must match our words of support with robust action for the people of Armenia. With this resolution, we are making it clear that it is a national security imperative for the U.S. government to do the right thing and once and for all halt security assistance to Azerbaijan.”

“We welcome Chairman Menendez and Sen. Rubio’s decisive leadership to enforce Section 907, stopping U.S. military aid to Azerbaijan, in the face of Azerbaijan’s ongoing occupation of sovereign Armenian and Artsakh territory,” said ANCA Executive Director Aram Hamparian.  “The U.S. policy of artificial even-handedness has only emboldened President Aliyev to expand his attacks against Armenia and Artsakh.  It’s long past time to end security assistance to Azerbaijan and sanction Aliyev and his corrupt government.”

The Senate resolution comes in the wake of two measures introduced in the U.S. House – led by Rep. Adam Schiff (D-CA) and Jackie Speier (D-CA) respectively, and supported by the Congressional Caucus on Armenian Issues – which condemn Azerbaijan’s latest attacks against Armenia and Artsakh, urge an end to military aid to Azerbaijan, and urge U.S. and international investigations into Azerbaijani war crimes.  The Schiff Resolution (H.Res.1351) currently has 48 cosponsors.

On September 13th, Azerbaijani forces launched a heavy artillery attack using mortars and drones on Armenian military and civilian infrastructure in Sotk, Vardenis, Goris, Kapan, Jermuk, Artanish and Iskhanasar, located on Armenia’s eastern border with Azerbaijan. Over 200 Armenians have been confirmed killed, 293 injured, and 20 taken captive with Azerbaijani troops still stationed on sovereign Armenian territory. The attack is the largest since the 2020 Turkey and Azerbaijan-led 44-day war against Artsakh and Armenia, which claimed over 5000 Armenian lives.

Less than a week after the attacks, U.S. House Speaker Nancy Pelosi (D-CA) led a Congressional delegation visit to Armenia in a show of U.S. solidarity for the Armenian people in the face of Azerbaijani aggression.  “America is committed to Armenia’s security, democracy and we stand with Armenia in a difficult time,” stated Speaker Pelosi, who went on to “strongly condemn Azerbaijan’s recent attacks on Armenia.”  The delegation included Congressional Armenian Caucus co-Chairs Frank Pallone (D-NJ) and Jackie Speier (D-CA) and Representative Anna Eshoo (D-CA).

The ANCA’s online advocacy platform – anca.org/907 – has been updated to urge support for the Senate Resolution submitted by Chairman Menendez and Sen. Rubio.

IN THE SENATE OF THE UNITED STATES

Mr. MENENDEZ (for himself and Mr. RUBIO) submitted the following resolution; which was referred to the Committee on ___________

Expressing the sense of the Senate condemning Azerbaijani forces’ illegal and unprovoked assault on Armenian territory and insisting upon the cessation of security assistance to Azerbaijan in accordance with Federal law.

Whereas on September 13, 2022, Azerbaijani forces mounted an illegal and unprovoked assault on Armenian territory, including the cities of Vardenis, Sotk, Artanish, Ishkhanasar, Goris, and Kapan;

Whereas the Azerbaijani military fired artillery at Armenian villages along the border, forcing more than 2,750 civilians, including 370 children and 55 people with disabilities, to evacuate their homes and take shelter;

Whereas, according to Armenia’s Ministry of Territorial Administration and Infrastructure, the Azerbaijani attack damaged 192 residential buildings in Gegharkunik, Syunik, and Vayots Dzor Provinces; Whereas, according to the Armenian Ombudsman, Azerbaijani shelling set fire to a forest in Jermuk, with artillery fire preventing Armenian firefighters from immediate access to the blaze;

Whereas according to Prime Minister Pashinyan, Azerbaijani forces illegally advanced into at least 10 square kilometers of Armenian territory;

Whereas on the evening of September 14, 2022, Secretary of the Security Council of Armenia, Armen Grigoryan, announced that a ceasefire took hold;

Whereas Azerbaijan’s latest attack on Armenian territory and the Armenian people follows a long pattern of aggression, including during the 2020 Nagorno Karabakh War, when an attack by Azerbaijani forces ignited a conflict that killed more than 6,500 people and displaced almost 100,000 ethnic Armenians;

Whereas Azerbaijan continues to hold at least 35 prisoners of war and 3 civilian prisoners from the Nagorno Karabakh War and Azerbaijan’s recent attack on Armenia;

Whereas Azerbaijan’s attack on Armenia, which was launched on September 13, 2022, is a flagrant violation of Armenia’s sovereignty and territorial integrity, and a violation of international law;

Whereas section 907 of the FREEDOM Support Act (22 U.S.C. 5812 note) prohibits United States assistance to Azerbaijan ‘‘until the President determines, and so reports to Congress, that the Government of Azerbaijan is taking demonstrable steps to cease all blockades and other offensive uses of force against Armenia and Nagorno-Karabakh’’;

Whereas title II of the Foreign Operations, Export Financing, and Related Programs Appropriations Act of 2002 (Public Law 107–115) allows the President to waive section 907 of the FREEDOM Support Act under certain statutorily defined conditions, including if doing so ‘‘will not undermine or hamper ongoing efforts to negotiate a peaceful settlement between Armenia or Azerbaijan or be used for any offensive purposes against Armenia’’;

Whereas upon exercising such waiver, the President must submit a report to appropriate congressional committees outlining—

(1) ‘‘the nature and quantity of all training and assistance provided to the Government of Azerbaijan pursuant to [the waiver],’’;

(2) ‘‘the status of the military balance between Azerbaijan and Armenia and the impact of United States assistance on that balance’’; and

(3) ‘‘the status of negotiations for a peaceful settlement between Armenia and Azerbaijan and the impact of United States assistance on those negotiations’’; Whereas on March 2, 2022 the Government Accountability Office released a report, which found that the Department of State and the Department of Defense failed to meet certain statutory reporting requirements to Congress, including the impact of proposed assistance on the military balance between Azerbaijan and Armenia;

Whereas the Government Accountability Office found that the Department of State and the Department of Defense did not document their consideration of waiver requirements from fiscal year 2014 through fiscal year 2020, including how the departments determined that assistance would not be used for offensive purposes against Armenia; and

Whereas despite agreeing with the Government Accountability Office’s recommendations, the Department of State has not demonstrated how it will adequately report to Congress on statutorily required considerations for aid to Azerbaijan: Now, therefore, be it

Resolved, That the Senate—

(2) urges Azerbaijan to fully adhere to the ceasefire agreed to on September 14, 2022;

(3) demands that Azerbaijan respect the territorial integrity of Armenia;

(5) insists that the Department of State meet all statutorily required reporting requirements for consideration of United States assistance to Azerbaijan;

(6) urges the Secretary of State to immediately halt all security assistance to Azerbaijan;

(7) urges the President to evaluate whether officials of the Government of Azerbaijan should be subject to sanctions under the Global Magnitsky Human Rights Accountability Act (subtitle F of title XII of Public Law 114–328) for human rights abuses against ethnic Armenians; and

(8) supports the robust provision of humanitarian assistance to the people of Armenia and Nagorno Karabakh affected by Azerbaijan’s war of aggression.