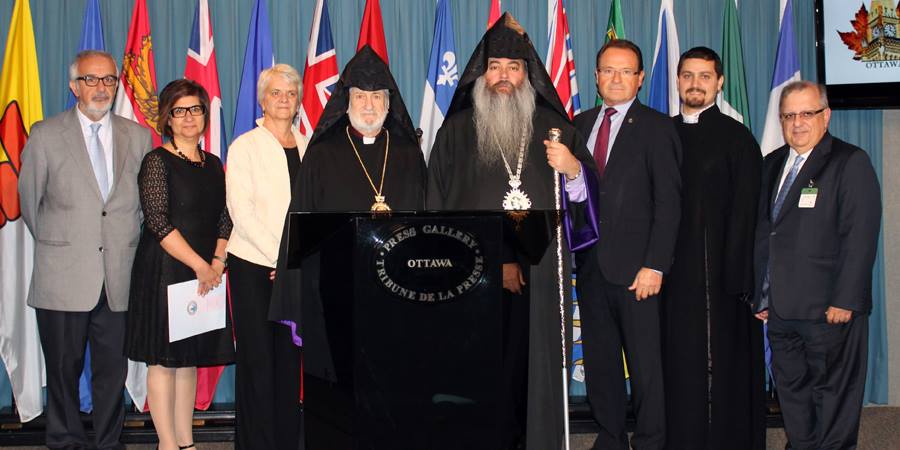 Following al Qaeda affiliated armed groups that crossed into Syria from Turkey and attacked Kessab, ISIL attacked on the Armenian Genocide museum and church in Der Zor and desecrated the holy site. The ANCC is calling upon the Canadian government to use its influence with Turkey to stop allowing these incursions and stop targeting Armenian historic sites and monuments.

Condemning the desecration of Holy sites

There has been a lot of attention paid to the beheadings of aid workers, journalists and the mass murders committed by ISIL. That is natural, these are horrific actions that are unimaginable and totally unacceptable.

I’m not standing here today just as a Conservative MP, nor solely as a Christian. I am here as a human being who believes strongly in the freedom of religion. All religion.

ISIL is targeting sites and civilians that reject its violent version of Islam.

This is not a partisan issue. Freedom to worship is one of the most fundamental of human rights.

When I was much younger, Prime Minister Diefenbaker said, and I quote,

“I am a Canadian, free to speak without fear, free to worship in my own way, free to stand for what I think right, free to oppose what I believe wrong, or free to choose those who shall govern my country. This heritage of freedom I pledge to uphold for myself and all mankind.”

I stand here today with my colleagues, renewing that pledge.