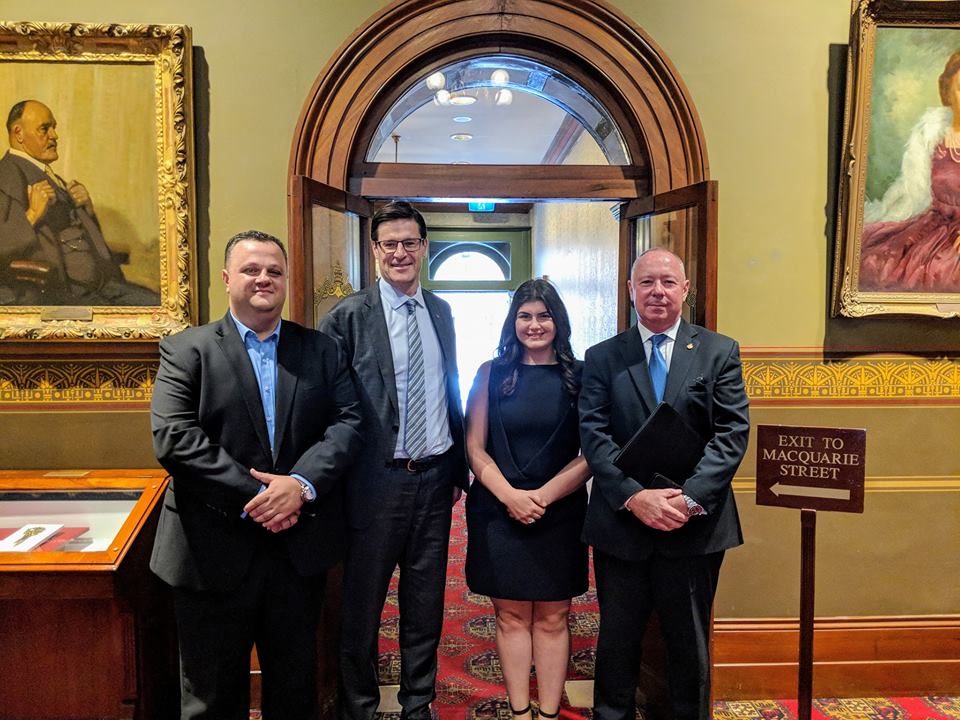 SYDNEY: Following meetings with the Armenian National Committee of Australia (ANC-AU), two Members of Parliament in Australia’s largest state of New South Wales (NSW), Jonathan O’Dea of the Liberal Government and Hugh McDermott of the Labor Opposition, rose in the Legislative Assembly to commemorate the 30th Anniversary of the Sumgait Massacres.
]

On Tuesday, 6th March 2018, the Chair of the NSW Armenia-Australia Parliamentary Friendship Group, Jonathan O’Dea began by congratulating the Armenian Youth Federation of Australia (AYF-AU) – many of whom are constituents in his electorate of Davidson – for donating blood to the Red Cross in memory of the 38 soldiers, who died as a result of Azerbaijani conflict in the previous year.

“The blood donations saved lives in Australia and honoured the memory of the community’s brothers and sisters in Artsakh,” O’Dea said.

O’Dea continued by recalling the dire situation the Armenians of Artsakh faced under prospect of continued Azeri rule.

He added: “Historically a part of Armenia, Artsakh declared its independence around the same time that most countries in the old Soviet Union were declaring independence, fearing they would not survive if they continued under Azeri rule as Stalin had determined. These fears were well placed.”

“Last week, on 27 February, marked the thirtieth anniversary of the Sumgait Massacres, when 200 Armenians died essentially because of their resolve to exercise a right to self-determination.”

O’Dea stressed the importance of recognising these historical crimes, noting the ongoing violence that has resulted from the absence of justice for the victims of these crimes against humanity.

Hugh McDermott followed O’Dea, recalling that in 2012 the NSW Parliament recognised the right to self-determination for the Armenian people in the Republic of Artsakh.

“Sadly, the shellings continue and are causing ongoing deaths, despite an internationally brokered ceasefire involving both Azerbaijan and Armenia,” McDermott said.

McDermott, Member for Prospect, urged both domestic parliaments and international human rights organisations condemn the genocidal acts committed against the Armenians of Azerbaijan.

He added: “The Azeris responded to this desire for the Artsakh Armenians’ rights of determination with brutal force. Pogroms were organised and massacres of women, children and young men occurred.”

“On 27 February 2018 the Armenian-Australian community joined the rest of the Free World in condemning the thirtieth anniversary of the Sumgait Massacres of 1988, when rampaging criminal mobs looted Armenian homes and hunted for Armenians. It is estimated that the official death toll was more than 200; however, thousands more fled or were deported.”

McDermott went on to praise the bravery of the Armenians of Artsakh in exercising their right to self-determination, reiterating his support for the recognition of the Republic of Artsakh.

“The Armenians—men, women and children—fought back heroically to protect their historic motherland. Eventually—amongst a flurry of referendums by countries, including Armenia and Azerbaijan—breaking away from the Soviet Union, the Armenians of Artsakh exercised their right to self-determination,” McDermott continued.

“They sought freedom and democracy. They held a referendum and declared independence, with more than 98 per cent voting for the republic, which was recently renamed to its historical title of the Republic of Artsakh. This independence has been recognised by New South Wales, and I stand proudly in support of that and recognise the Republic of Artsakh. Ultimately, the atrocities committed in the city of Sumgait 30 years ago reignited the memory of the atrocities committed in 1915 by the Ottoman Empire.”

Over this last month, the Armenian National Committee of Australia (ANC-AU) and the Armenian Youth Federation of Australia (AYF-AU) have conducted coordinated social media and informational campaigns to build awareness of the Sumgait Massacre and the 30th Anniversary of the Artsakh Movement.

This included ANC-AU’s #SUMGAIT30 social media campaign documenting the events of the Sumgait Massacres, and AYF-AU’s Nigol Touman and Pegor chapters’ flyer campaign in Sydney’s CBD, highlighting the evolution of the Artsakh Movement and the continued struggle for independence.