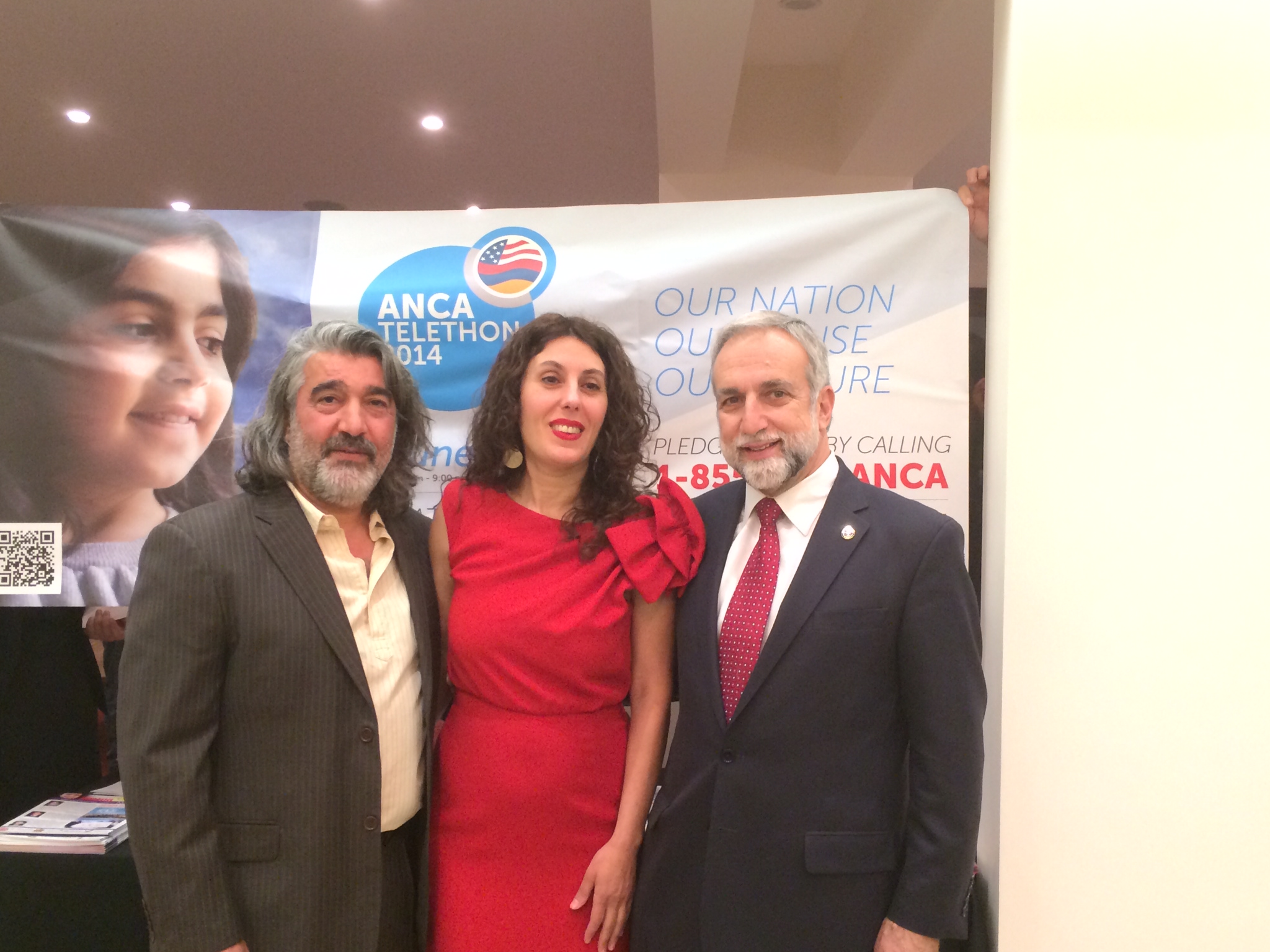 LOS ANGELES, CA- Over one hundred prominent individuals from across Los Angeles gathered at the home of Hratch Manuelian and Lara Yeretsian to support the Armenian National Committee of America’s (ANCA) Telethon 2014. The special gathering in the Los Feliz Estates, overlooking the City of Los Angeles, was held on April 4, 2014, and included the participation of national ANCA Chairman Ken Hachikian and is one of several private receptions that will be held prior to the nationwide airing of the ANCA Telethon on June 1, 2014.

“The Armenian National Committee of America is at the forefront of the Armenian Cause and any and all other Armenian issues,” remarked Lara Yeretsian, who hosted the ANCA Telethon reception at her home with her husband Hratch Manuelian. “It is imperative for every Armenian American to support and donate to the ANCA so it can continue being our voice in the U.S. Capitol,” she added.

“We want to thank longtime volunteers and community activists Lara Yeretsian and Hratch Manuelian for opening up their home to a diverse group of people who care deeply about advancing the Armenian Cause,” said ANCA Telethon Executive Committee Chairman Steve Artinian. “It is through such generosity that the ANCA, as the largest and most powerful grassroots organization in the United States, is able to advocate for Hai Tahd in the State of California and throughout the United States. The reception was a success and we know this year’s Telethon will be our best yet,” Artinian added. ANCA leaders at the local, regional and national level were on hand for the event, along with leaders of various Armenian organizations and community members from across southern California.

The entertainment for the reception at the home of Lara Yeretsian and Hratch Manuelian was graciously provided by the talented folk singer Gor Mkhitarian. Gor has been described by James Christopher Monger of the All Music Guide as “lead[ing] the march out of the Armenian underground with a wicked blend of Armenian folk music and Western-influenced rock.” Gor Mkhitarian has consistently appeared in public service announcements for ANCA Telethons to express his support for the organization’s work in advancing the Armenian Cause.

The ANCA Telethon 2014 is a nationwide fundraising campaign designed to empower Armenian Americans, protect Armenia and promote the Armenian Cause throughout the United States. The gathering in the Hollywood Hills is part of a coordinated and major grassroots effort, featuring community events and a social networking campaign that will lead up to June 1, 2014, when the 6-hour telethon will be aired in major markets across the United States. The ANCA Telethon 2014 will be on air in New York City, Boston, Chicago, Los Angeles, among other major American cities, with full schedule and channel information slated to be released in the coming weeks.

In support of the ANCA Telethon 2014, countless organizations, volunteers, churches, community leaders, performing artists, politicians will be coming together to highlight the successes of the ANCA in advancing the Armenian Cause in Washington, DC and across the United States. The telethon will feature several documentaries focused on the work of the organization and the volunteers whose grassroots efforts have made the ANCA a strong and universally respected voice for the Armenian Cause.