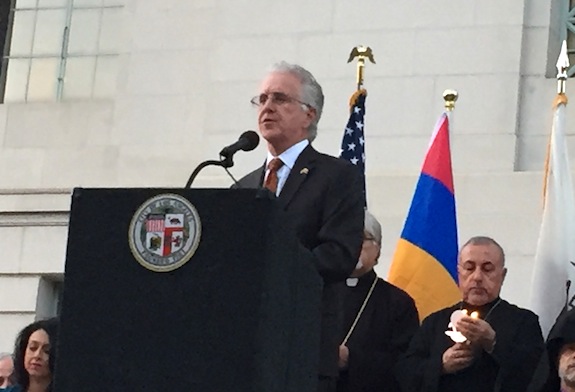 No corporation should profit from Genocide Denial’

(ASBAREZ) LOS ANGELES—Los Angeles City Councilmember Paul Krekorian – a descendent of Armenian Genocide survivors – introduced a motion on Friday directing all Los Angeles City offices to cancel their subscriptions to the Wall Street Journal and other major newspapers for printing full-page ads paid for by groups dedicated to denying the Armenian Genocide.

“The actions of the Wall Street Journal are far worse than complacency,” said Councilmember Krekorian. “By allowing a shadowy organization to buy ad space and perpetuate noxious, unsupported views that ignore the systematic killing of 1.5 million Armenians, they are complicit in genocide denial. Until they apologize to the community, give equal space to truth-based advertising, and change their ad policies once and for all, the City of Los Angeles will not support them. We cannot subsidize genocide denial with our tax dollars.”

“We fully support the initiative taken by Councilmember Paul Krekorian and the Los Angeles City Council in holding accountable those media outlets who are willing to sell their principles to the highest bidder,” said Nora Hovsepian, Chair of the Armenian National Committee of America, Western Region. “Armenian Genocide denial is not a political or business commodity, and Turkish denialists should not be given a forum to spew their lies. No one would sell ad space for any price to the Holocaust deniers in Iran, and this double standard should not be tolerated. We call on all subscribers of newspapers which print Genocide denialist ads to send a clear message of protest by canceling their subscriptions.”

On April 20, just four days before the world commemorates Armenian Genocide Remembrance Day, in honor of the 1.5 million Armenians who were tortured, starved, killed and forced into exile by the Ottoman Empire, the Wall Street Journal – the business paper of record in the United States – accepted tens of thousands of dollars from “Fact Check Armenia,” a website that perpetuates the vicious lie that the Armenian Genocide did not occur. “Fact Check Armenia” launched a nationwide ad campaign to cast doubt on facts that people throughout the world recognize as indisputably true.

When faced with a public backlash from Americans of all backgrounds, the Wall Street Journal issued a pathetic response: “We accept a wide range of advertisements, including those with provocative viewpoints. While we review ad copy for issues of taste, the varied and divergent views expressed belong to the advertisers.” This contrasts with the New York Times, whose guidelines stipulate that “events such as the World Trade Center bombings, or the Holocaust, or slavery in the United States, or the Armenian Genocide or Irish Famine cannot be denied or trivialized in an advertisement.”

Krekorian’s motion also orders City of LA offices to cancel subscriptions to other newspapers that published ads from the same denialist organization, including the Chicago Tribune (owned by LA Times parent company, Tribune Publishing) and the San Jose Mercury News (owned by LA Daily News parent company, Digital First Media). A genocide denial billboard placed in Boston earlier this month was removed after a community uproar caused Clear Channel to take it down, calling it an “error.”

Photo: Paul Krekorian speaking this month at a candle light vigil in solidarity with Artsakh at City Hall.