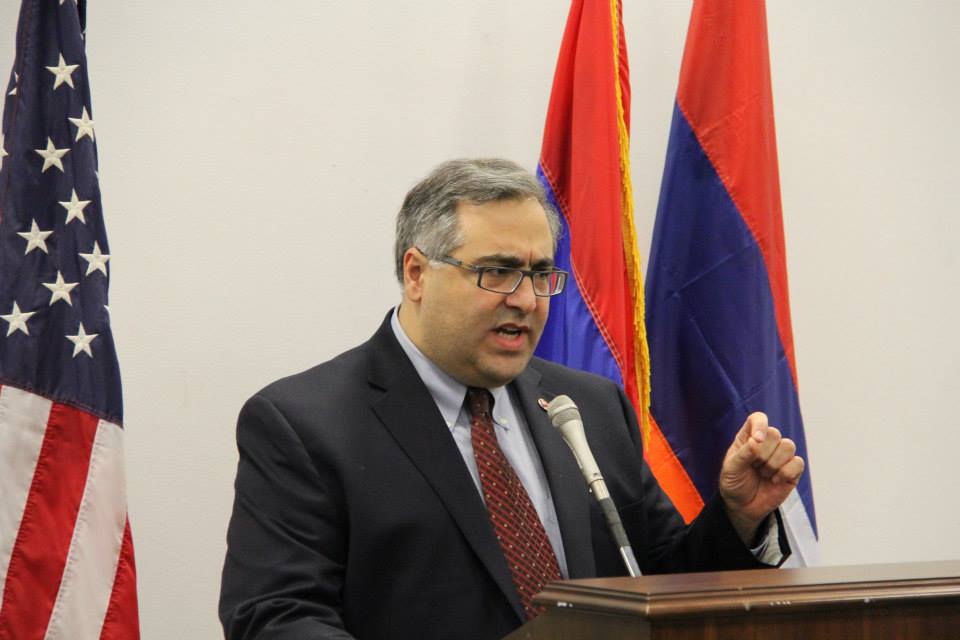 (ARMENIAN WEEKLY) WASHINGTON — U.S. Secretary of State John Kerry issued a statement on April 2 condemning “in the strongest terms” the ceasefire violations along the Nagorno-Karabagh (Artsakh, NKR) Line of Contact. Kerry’s statement avoids assigning blame, and instead appeals to “the sides” to “show restraint” and enter into “an immediate negotiation under the auspices of the OSCE Minsk Group Co-Chairs on a comprehensive settlement of the conflict.”

“The ANCA is sharply disappointed in Secretary Kerry’s false parity in the face of open Azerbaijani aggression,” said Armenian National Committee of America (ANCA) Executive Director Aram Hamparian. “The Obama Administration recklessly set the stage for this escalation by so warmly welcoming [Azerbaijani] President Ilham Aliyev to Washington. By failing to confront either his growing regional aggression or, for that matter, his worsening domestic repression, President [Barack] Obama effectively gave Aliyev the green light to continue his march toward war. Aliyev got the message and—at the cost of dozens of lives—acted on it within hours of leaving Washington.”

Hamparian urged the Obama administration to condemn Baku’s recent act of aggression against Artsakh. “President Obama must clearly and unequivocally condemn Azerbaijan’s aggression, immediately secure the implementation of the Royce-Engel peace proposals, and support the inalienable right to self-determination of the independent Republic of Nagorno Karabagh,” said Hamparian.

Azerbaijan launched a full-blown attack on multiple positions of the Nagorno-Karabagh contact line overnight on April 1-2. The Azerbaijani army employed tanks, military helicopters, drones, and various caliber weapons in an assault targeting the Line of Contact on the southern, southeastern, and northeastern fronts. The NKR Defense Army retaliated, and, according to the NKR Defense Ministry Twitter page, brought down two helicopters and two drones, and destroyed three tanks. There are multiple casualties on both sides; Azerbaijan has reported 12 combatant casualties. Civilians have also been targeted. According to reports, 12-year-old Vaghinag Grigoryan was killed in the Marduni region, while two other children were wounded, from a Grad BM-21 multiple rocket launcher attack.

During an emergency meeting of Armenia’s National Security Council held on the evening of April 2, Armenia’s President Serge Sarkisian announced that as a result of the attacks, the Armenian side suffered 18 casualties, while 35 people were injured. Azerbaijan’s losses—including air force, personnel, and armored vehicles—were “significant,” he added, according to PanArmenian.

The ANCA has urged the public to take action by sending a webmail to President Obama, Congress, and the OSCE Karabagh negotiators urging them to take immediate action to stop Baku’s latest attacks. To take action, click here.

Below is Secretary Kerry’s statement in full.

The United States condemns in the strongest terms the large-scale ceasefire violations along the Nagorno-Karabagh Line of Contact, which have resulted in a number of reported casualties, including civilians. We extend our condolences to all affected families. We urge the sides to show restraint, avoid further escalation, and strictly adhere to the ceasefire. The unstable situation on the ground demonstrates why the sides must enter into an immediate negotiation under the auspices of the OSCE Minsk Group Co-Chairs on a comprehensive settlement of the conflict.

We reiterate that there is no military solution to the conflict. As a co-chair country, the United States is firmly committed to working with the sides to reach a lasting and negotiated peace.

(04/04/2016) ANCA Executive Director Aram Hamparian offers this update regarding the ANCA’s efforts in the three days since Azerbaijan began its widespread attacks on Nagorno Karabakh.