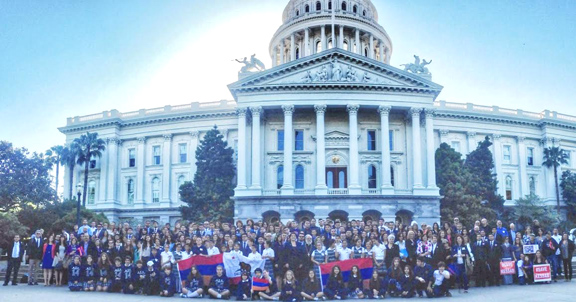 In early January, we, along with our leaders in the CA legislature, Assemblymembers Adrin Nazarian and Katcho Achadjian, embarked on a journey that would ensure that future generations learned the truth about the Armenian Genocide in California public schools.

Since then, with the help of our powerful grassroots, our staff and our volunteers have been working hard day-in and day-out to make this dream a reality.

Just yesterday, we won yet another battle on this front when the CA Senate Appropriations Committee took up AB 1915 on their first day back in session.

Here is the short list with links to the full articles of what we have been able to accomplish with your help and support despite heavy opposition by pro Turkey lobbying groups since January:

January 29, 2014: The CA State Assembly voted unanimously, to pass AB 659, encouraging schools to use oral histories when teaching about the Armenian Genocide.

April 7, 2014: More than 350 activists of all ages converged upon the CA State Capitol to participate in the Annual ANCA WR Advocacy Day and advocated for Genocide education in public schools, support for Artsakh’s Independence, amongst other issues of importance to the Armenian community.

April 9, 2014: Our efforts paid off. The CA Assembly Education Committee unanimously passed AB 1915, the Genocide Education Act, which requires the inclusion of the Armenian Genocide in the list of studied subject areas for 7-12, and recommends for the Department of Education to include the atrocities of 1915 into publications and curriculum materials.

June 18, 2014: After amending AB 1915 to consolidate and include language from AB 659, the California Senate Education Committee unanimously passed AB 1915.

I have to be honest. It hasn’t been an easy road.

These victories were not just handed to us.

We won these landmark victories through grassroots efforts in the face of millions being poured by the Turkish and Azeri Lobby into our State Capitol and bullying tactics used to try and buy their votes.

We had to fight for truth and justice every step of the way.

And as we work to have the bill passed by the California State Senate, we need you more than ever.

With your renewed financial support, future generations of Californians will learn about the horrors inflicted upon our ancestors during the Armenian Genocide of 1915.

– If you would prefer to donate by check, please send your donation to the address listed below.