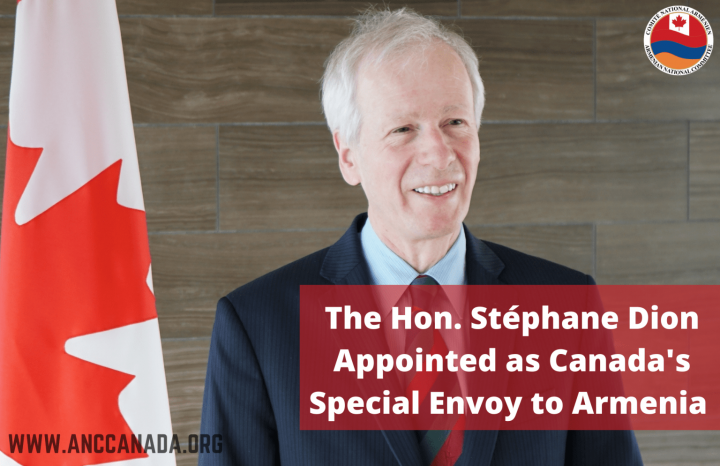 ANCC Co-Presidents, Hrag Tarakjian and Shahen Mirakian and Executive Director Sevag Belian were a part of the delegation that engaged in a friendly and constructive discussion with the ambassador and officials from Global Affairs Canada about the newly announced mission and the priorities and expectations of the Armenian-Canadian community.

The ANCC delegation welcomed Mr. Dion’s appointment as an important step in securing further Canadian engagement in Armenia, noting the wide-ranging issues that are currently faced by Yerevan and the pivotal role that Canada could play in helping the Armenian people tackle these challenges.

Despite the fact that Mr. Dion’s mission primarily focuses on strengthening Armenian democracy, the ANCC delegates also emphasized the paramount importance of addressing Armenia’s various security challenges posed by the hostile regimes of Turkey and Azerbaijan which stand as the largest barriers to achieving internal stability and full democracy in Armenia. It was underlined that without helping Yerevan address its national security challenges, it will be virtually impossible to bring about positive change in the way Armenia is governed.

The ANCC delegation emphasized the vital need for Canada to upgrade its diplomatic representation in Armenia by establishing an embassy in Yerevan and increases the economic and political cooperation between the two countries via direct investments and aid. The delegation welcomed Canada’s commitment to improving the democratic process in Armenia specially in light of the autocratic tendencies of the current authorities, the unhealthy relationship with the political opposition, the negative rhetoric of the last election campaign and the need to have an independent and protected judicial system and civil service. At the end of the meeting, the ANCC representatives provided Mr. Dion with a preliminary list of recommendations and agreed to continue the constructive engagement.