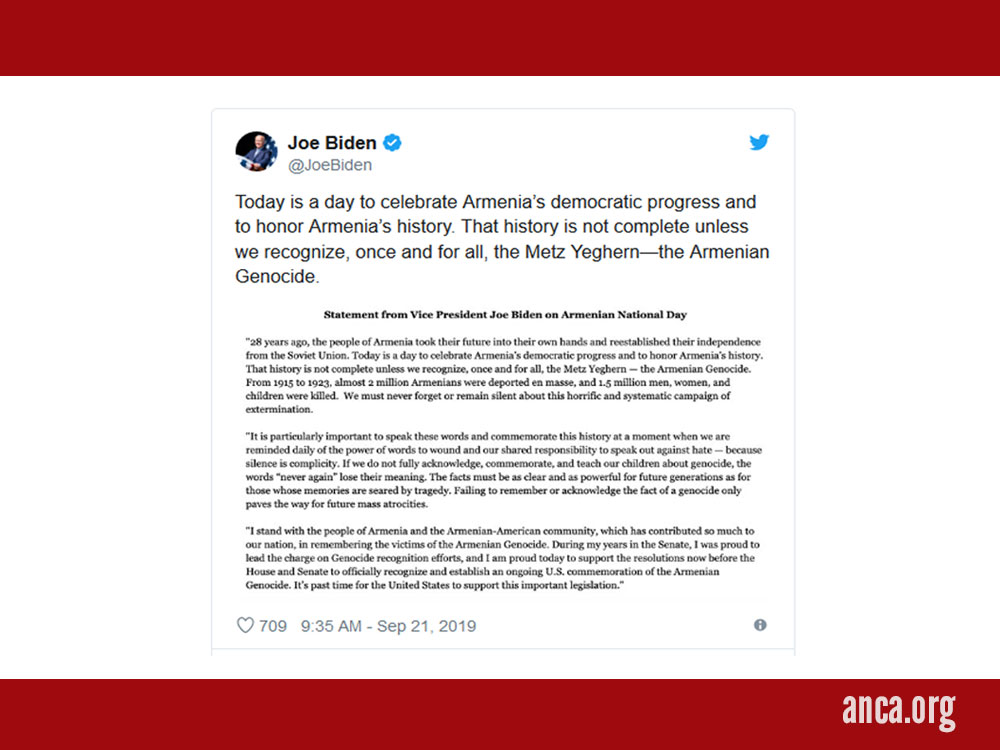 — Biden: “I am proud today to support the resolutions now before the House and Senate to officially recognize and establish an ongoing U.S. commemoration of the Armenian Genocide.”

WASHINGTON, DC – Former Vice President Joe Biden and current front-runner in the 2020 Democratic Presidential Primary called on the U.S. to “once and for all” reaffirm its policy on the Armenian Genocide, sharing his support for U.S. Senate and House legislation (S.Res.150 and H.Res.296) which permanently locks in official recognition, rejects Turkey’s denial, and encourages public education regarding this crime, reported the Armenian National Committee of America (ANCA).

In a statement posted to his Facebook and Twitter accounts, Biden marked the 28th anniversary of Armenian independence and went on to note that “history is not complete unless we recognize, once and for all, the Metz Yeghern — the Armenian Genocide.” He offered his support for pending Armenian Genocide legislation, noting “it’s past time for the United States to support this important legislation.” Biden has over 1.4 million followers on Facebook and 3.7 million followers on Twitter.

“Joe Biden sent a clear message to House Speaker Pelosi and Senate Majority Leader McConnell to green-light votes on the Armenian Genocide Resolution – H.Res.296 and S.Res.150 – in their respective chambers of Congress,” said ANCA Executive Director Aram Hamparian. “How these two leaders – from opposing parties – advance or obstruct these resolutions will speak volumes about the respect they – and their respective parties – hold for Armenian American views, values, and votes.”

Biden’s complete statement is provided below.

Earlier this week, on September 16th, in a letter to the ANCA, Biden noted “We must never forget or remain silent about this horrific and systematic campaign of extermination that resulted in the deaths of 1.5 million Armenian men, women, and children and the mass deportation of 2 million Armenians from their homes.”

Hamparian, in responses to an interview with Voice of America regarding Biden’s letter, stressed the importance of having Armenian American concerns – U.S. Armenia relations, Artsakh security and freedom, a principled U.S. policy on the Armenian Genocide – part of the presidential election political discourse, and the vital role Armenian American voters will play in California and traditionally swing states of Michigan, Pennsylvania, Florida, and other key states in the 2020 elections.

While candidate pledges are meaningful, said Hamparian, “far more important are the actual deliverables that candidates can provide for our community; the concrete steps – before election day – not the promises of what they will do after election day.” Hamparian offered concrete examples, including support for passage of Armenian Genocide legislation. “If candidates can help pass H.Res.296 in the U.S. House and S.Res.150 in the U.S. Senate – if they can lean on the leaders in the House and Senate to get those resolutions passed, if they can make a sincere and sustained effort to accomplish these policy priorities for the Armenian Community – I think voters on election day will respect that type of commitment,” concluded Hamparian.

VOA coverage of the ANCA’s views on Biden’s letter (in Armenian) is available at:
https://www.amerikayidzayn.com/a/5092577.html

Video of ANCA’s responses to VOA questions on the Biden letter to the ANCA is available at:
https://youtu.be/GjGLeyZ9jyY

The full text of former Vice President Biden’s letter to the ANCA and a detailed review of his lengthy record on the Armenian Genocide, both as a U.S. Senator and as Vice President during the Obama-Biden Administration are provided at: https://anca.org/press-release/joe-biden-calls-for-reaffirmation-of-u-s-record-on-the-armenian-genocide/

U.S. Senate and House Armenian Genocide legislation (S.Res.150 and H.Res.296) aim at establishing, as a matter of U.S. policy, 1) the rejection of Armenian Genocide denial, 2) ongoing official U.S. government recognition and remembrance of this crime, and 3) the importance of education about the Armenian Genocide in preventing modern-day atrocities. Over 100 U.S. Representatives have cosponsored H.Res. 296, which was spearheaded by Representatives Adam Schiff (D-CA) and Gus Bilirakis (R-FL). The Senate version, led by Senators Bob Menendez (D-NJ) and Ted Cruz (R-TX), currently has 18 cosponsors. The ANCA supports immediate consideration and passage of both measures.

28 years ago, the people of Armenia took their future into their own hands and reestablished their independence from the Soviet Union. Today is a day to celebrate Armenia’s democratic progress and to honor Armenia’s history. That history is not complete unless we recognize, once and for all, the Metz Yeghern — the Armenian Genocide. From 1915 to 1923, almost 2 million Armenians were deported en masse, and 1.5 million men, women, and children were killed. We must never forget or remain silent about this horrific and systematic campaign of extermination.

It is particularly important to speak these words and commemorate this history at a moment when we are reminded daily of the power of words to wound and our shared responsibility to speak out against hate — because silence is complicity. If we do not fully acknowledge, commemorate, and teach our children about genocide, the words “never again” lose their meaning. The facts must be as clear and as powerful for future generations as for those whose memories are seared by tragedy. Failing to remember or acknowledge the fact of a genocide only paves the way for future mass atrocities.

I stand with the people of Armenia and the Armenian-American community, which has contributed so much to our nation, in remembering the victims of the Armenian Genocide. During my years in the Senate, I was proud to lead the charge on Genocide recognition efforts, and I am proud today to support the resolutions now before the House and Senate to officially recognize and establish an ongoing U.S. commemoration of the Armenian Genocide. It’s past time for the United States to support this important legislation.