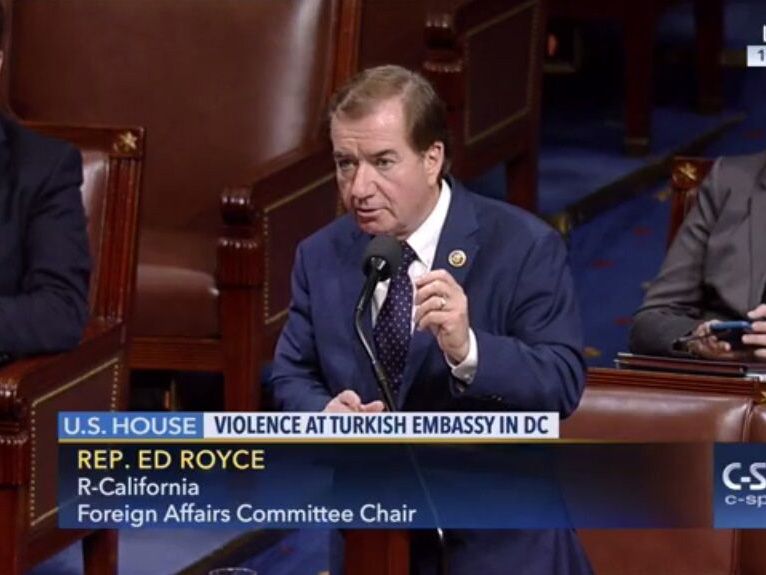 WASHINGTON, DC – With a vote of 397 to 0, the U.S. House of Representatives today unanimously condemned Turkey, sharply criticizing the brutal May 16th Erdogan-ordered attack against peaceful protesters in Washington DC, reported the Armenian National Committee of America (ANCA). H.Res.354 represents a powerful stand against Ankara’s attempts to export its violence and intolerance to America’s shores.

“With today’s vote, Congress started rolling back Ankara’s occupation of Washington, DC,” said ANCA Executive Director Aram Hamparian. “After far too many years of appeasing Ankara – turning a blind eye to its genocidal horrors, abuses at home, and aggression abroad – the United States, starting with the House of Representatives – today turned an important corner, challenging Turkey’s violence and confronting its increasingly anti-American conduct.”

Chairman Royce led House Floor discussion of the measure, noting, “the violent attacks by officers assigned to Turkish President Erdogan’s security detail against peaceful protesters back on May 16 were designed to do one thing: they were designed to silence those protesters’ criticism of the Turkish government. And that is why it is so important that we speak out. We must speak loudly and clearly that we will protect our citizens and their fundamental rights to free speech and to assembly.”

House Democratic Whip Steny Hoyer (D-MD) was adamant in his condemnation of the attacks. “It should be clear to Turkey and to all nations that we will oppose any attempt to suppress dissent or the freedom of speech. That is why that is in the first amendment to the Constitution of the United States. Because our founding fathers and, frankly, those who follow western values and, yes, some eastern values believe that free speech is the absolute essential for democracy to succeed and flourish.”

Maryland Congressman John Sarbanes (D-MD) called for a complete re-evaluation of the US-Turkey relationship, noting that the incident “unmasked President Erdogan for the bully he is . . . It reflects a deeply imbedded reflex that in the modern era has brought the world, among other things, the unlawful invasion and occupation of Cyprus, the Armenian Genocide and the violent repression of the Kurdish people.”

DC Delegate Eleanor Holmes Norton (D) expressed particular concern that the beatings are part of a pattern or repression by President Erdogan’s bodyguards. “A similar incident occurred about a half dozen years ago at the united nations. Same head of state. Same thugs attacking peaceful protesters. Last year, just this past year, there was an attack on journalists outside of the Brookings institute. So if we don’t tell them it’s time to stop when we had the third attack, they will persist, that is for sure.”

New York Congressman Adriano Espaillat (D) noted, “Erdogan simply decided to treat Americans the way he treats his own people. His guards even had the nerve to attack law enforcement officials who were protecting him and his delegation. This behavior cannot stand. And the resolution before us sends a clear, decisive message that congress won’t tolerate it.”

Video from the House Floor discussion of H.Res.354 is available on the ANCA YouTube channel here:

Following unanimous passage of the measure, Texas Congressman Ted Poe (R-TX) told Asbarez Newspaper editor Ara Khachaturian, “Turkey’s dictator Erdogan tried to bring his tyranny to our doorstep last month. Erdogan stood by and watched as his thugs brutally attacked peaceful American protestors outside the Turkish Ambassador’s residence. They were demonstrating against the Turkish government’s ongoing crackdown on human rights and free speech. I am proud to cosponsor H. Res. 354 condemning this vicious attack and sending a message that this show of force will not be tolerated in the United States of America. No foreign dictator will violate the rights of Americans on American soil with impunity. These protesters should return to the Turkish Ambassador’s residence and exercise their rights protected under our Constitution. Democracy will always prevail over tyranny. And that’s just the way it is.” During House Foreign Affairs Committee consideration of the measure, Rep. Poe was among the most strident in condemning the attacks, urging colleagues to join him in protests in front of the Turkish Embassy.

“Why was Erdogan so emboldened? Because we have had an American government that is coward for generations rather than recognize the Armenian Genocide,” said Rep. Brad Sherman (D-CA) in an email to Asbarez. “If we are so weak that we engage — that we are a party to genocide denial, who should respect our laws or our sovereignty or think that they’ll pay any price for anything they do here in our country? Finally, the actions of those thugs have been compounded by the lies of the Turkish ambassador,” added Sherman.

“It’s outrageous that Erdogan and his thugs felt they could beat up peaceful protesters on the streets of Washington. We don’t need him exporting his violence and repressive tactics to the United States,” said Rep. David Cicilline (D-RI), who helped lead last week’s House Foreign Affairs Committee hearing into the attacks on peaceful protesters. “I’m pleased that the House took this initial step today. Moving forward, we must make clear to Erdogan that freedom of speech is the law of the land in this country.”

ANCA Executive Director Aram Hamparian was videotaping live at the scene of the May 16th attack, which took place in front of the Turkish Ambassador’s residence where President Erdogan was scheduled to have a closed-door meeting with representatives of The Atlantic Council, a leading think tank in Washington, DC which receives funding from Turkey. Hamparian’s video showed pro-Erdogan forces crossing a police line and beating peaceful protesters – elderly men and several women – who were on the ground bleeding during most of the attack. Hamparian testified before a May 25th Foreign Affairs Subcommittee hearing on this matter. Joining him at the hearing were Ms. Lusik Usoyan, Founder and President of the Ezidi Relief Fund; Mr. Murat Yusa, a local businessman and protest organizer; and Ms. Ruth Wedgwood, Edward B. Burling Professor of International Law and Diplomacy, at Johns Hopkins University School of Advanced International Studies. Usoyan and Yusa were victims of the brutal assault on May 16th by President Erdogan’s bodyguards.

ANCA live footage of the attack served as source video for CNN, AP, The Washington Post, The Daily Caller and other major media, transforming the violent incident into a global spotlight on Erdogan’s attempt to export his intolerance and aggression to American shores.

The Sunday, June 4th edition of The New York Times featured a two-page center-spread investigative report on the May 16th attack, with online version of the coverage translated to Turkish and shared widely on social media. The ANCA is cited by The New York Times as a source for this report.

The Text of H.Res.354 is provided below.