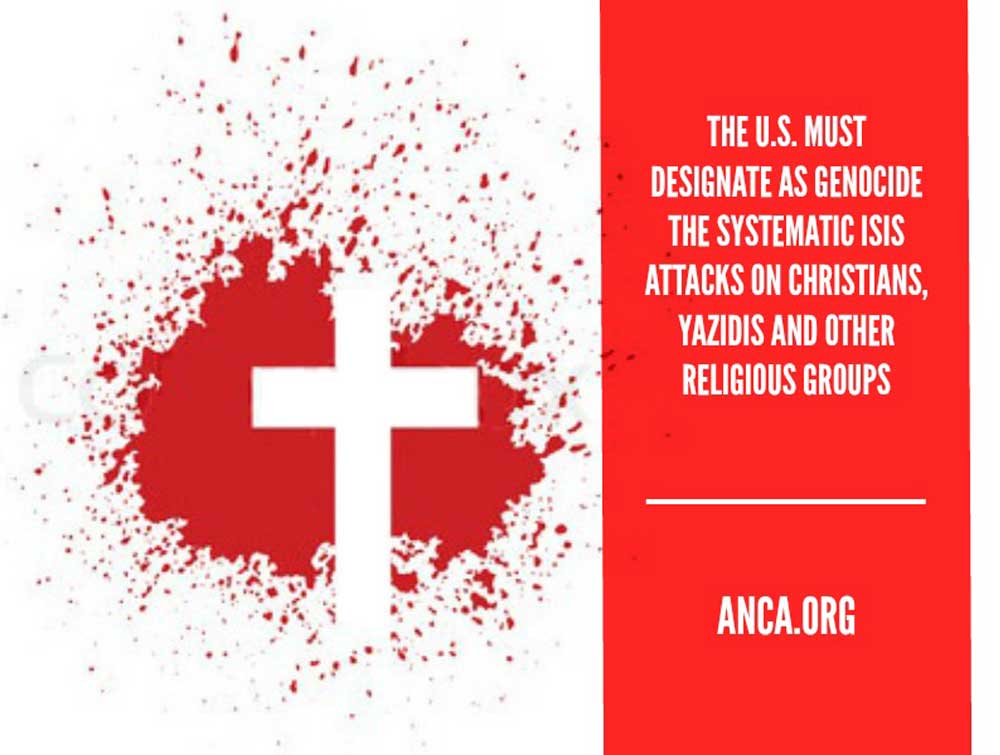 The December 23rd letter, addressed to Secretary of State John Kerry comes in response to reports that the Obama Administration is set to characterize the ISIS attacks on Yezidis as genocide, but will stop short of similarly referencing the murder and destruction of Christians and other minority groups. “While it is hardly possible to overstate the brutality of ISIL’s attempts to destroy the Yezidis, an overly narrow finding would wrongly discount similar violence directed against other minorities in the region, with likely dire consequences for those minorities,” noted the letter. The Congressional letter cited the recent U.S. Commission on Religious Freedom (USCIRF) report which, “call[ed] on the US government to designate the Christian, Yazidi, Shi’a, Turkmen and Shabak communities of Iraq and Syria as victims of Genocide by ISIL.”

The effort is part of a broad outcry of concern by Congressional leaders, genocide experts and rights groups, including the ANCA, to secure a clear U.S. genocide determination regarding the anti-Christian atrocities, including calls for passage of various U.S. House and Senate genocide measures and Obama Administration’s determination.

ANCA Western Region Chairwoman Nora Hovsepian outlined why the ANCA and the Armenian Americans are working hard with Assyrian-Chaldean, Greek and an array of human rights groups on securing the proper characterization of the ISIS genocide against Christians in this recent interview with the LA Daily News. “With respect to what’s happening in the Middle East now, it’s deja vu all over again. It’s like chapter two,” Hovsepian said. “Unfortunately, the United States’ policy at this point is baffling to us. Of course it’s a genocide against (Christians) as well. One of the reasons why it’s happening now is because it happened 100 years ago. (Turkey) got away with it then, with zero accountability.”

Last week ANCA Legislative Affairs Director Raffi Karakashian joined In Defense of Christians (IDC) Executive Director Kirsten Evans, A Demand For Action Executive Director Steve Oshana, and renowned genocide expert Greg Stanton for a meeting with White House officials to make the case for the proper genocide designation. On the same day, ANCA Executive Director Aram Hamparian participated in a White House briefing on Syrian refugees, urging the US to close gaps in aid to Armenian and other Christian victims of ISIS and other Islamic extremist groups.

The December 16th Capitol Hill press conference, organized by In Defense of Christians (IDC), a nonpartisan organization dedicated to the protection and preservation of Christians and Christian culture in the Middle East, brought the issue of the ongoing ISIS genocide front and center.

“When genocide has been committed or is looming the President and Congress should publicly say so and take robust actions to end it and ensure accountability,” explained Helsinki Commission Chairman Chris Smith (R-NJ), speaking at the press conference. “Any failure by President Obama to recognize the ongoing genocide against Christians would be irresponsible, indefensible, and unconscionable.” [Watch ANCA Video: https://youtu.be/gSXkHMVgp38]

Armenian and Assyrian American Congresswoman Anna Eshoo, who, along with Rep. Jeff Fortenberry (R-NE) serves as Co-Chair of the House Caucus for Religious Minorities in the Middle East said, “This is history for my family that is repeating itself all over again. […] Future generations will look at us and ask ‘did they do anything?'” [Watch ANCA Video: https://youtu.be/lSGcR-Zmq2k]

“We cannot underestimate the moral authority the United States has when we simply utter what is true,” stated Rep. Fortenberry, holding a photo of Christians shackled by ISIS abductors prior to their murder. [Watch ANCA Video: https://youtu.be/DiKx27365_k]

Congressman Dana Rohrabacher (R-CA) refuted arguments that labeling the slaughter of Christians ‘genocide’ is a form of religious bias. “It is not about a test of religion. It is about special protection for victims of targeted and systematic persecution.”

Internationally reknowned Genocide and human rights expert, Dr. Greg Stanton outlined how the ISIS actions against Christians meets the internationally agreed UN definition of ‘genocide’ and went on to explain why that designation is important.

“‘Genocide’ is a much more powerful word that ‘crimes against humanity,’ war crimes, ‘ethnic cleansing,’ or ‘atrocity crimes,'” noted Stanton, citing a 2007 study he and colleagues had conducted on the words used in The New York Times to describe the Bosnia, Rwanda, Kosovo and Darfur genocides. “We discovered that as long as ‘ethnic cleansing’ was used, there was no forceful action to stop it. As soon as the situations were called ‘genocide,’ forceful action resulted and ended the killing, except in Darfur where a UN Commission of Inquiry rejected the ‘genocide’ word.”

Stanton went on to identify the two most important reasons for the ‘genocide’ designation, explaining first that the word “more strongly justifies our broad coalition military support for Kurdish and Iraqi forces to defeat ISIS;” and second, “members of such groups are much more likely to receive preferential treatment as bona fide refugees under the UN Convention and Protocols on the Status of Refugees.” [Watch ANCA Video: https://youtu.be/2Ji7Md6T3Tc]

Nina Shea, Director of the Hudson Institute Center for Religious Freedom, cited the importance of political advocacy by Christians and all Americans of good conscience in support of passage Congressional legislation characterizing the ISIS attacks as Genocide, and finished her remarks with a simple question: “To Secretary Kerry, Samantha Power, and President Obama I ask, ‘Where are you?'”

“In August of 2014 the Iraqi parliament decried the atrocities and crimes against humanity targeting religious minorities under ISIS as a genocide. Many others have done the same, including Pope Francis, the United States Commission on International Religious Freedom, and the world’s leading international association of genocide scholars. In Defense of Christians has been working hard to ensure that the United States government, both Congress and the State Department, do the same,” stated IDC Executive Director Kirsten Evans when opening the conference. [Watch ANCA Video: https://youtu.be/efTJUWShJHg]

Over the past months, a diverse group of religious, civic and ethnic groups have petitioned the White House to include Christians in their ‘genocide’ designation when describing ISIS atrocities.

On November 25th, the ANCA joined Assyrian/Chaldean/Syriac rights group “A Demand for Action,” IDC and over 20 organizations in urging swift Obama Administration action. “Calling genocide by its proper name cannot wait for a ruling by a court of law. Under the Convention on the Prevention and Punishment of the Crime of Genocide we have an obligation to work toward prevention and punishment,” stated the letter, a copy of which is available here: https://anca.org/wp-content/uploads/2015/12/112515_Obama_ChristianGenocide.pdf

On December 4th, the Knights of Columbus and Hudson Institute Center for Religious Freedom led a similar effort urging Secretary Kerry to take action. “The United States is rightly viewed the world’s leading defender of vulnerable minorities, and as an historic safe-haven for those fleeing religious persecution. A declaration of genocide by the State Department is thus a unique opportunity to bring America’s religious communities together to pursue the truth, to support the victims, and to bear witness to the noble principle of ‘Never Again,'” noted the letter, cosigned by the ANCA and a number of Armenian American leaders including the His Eminence Archbishop Oshagan Choloyan, Prelate, Prelacy of the Armenian Apostolic Church of America (Eastern); and Archbishop Vicken Aykazian Ecumenical Director and Legate, Diocese of the Armenian Church of America (Eastern). A copy of the letter is available here: https://anca.org/wp-content/uploads/2015/12/120415_ChristianGenocide_KOFC.pdf

In a September, 2015, appeal, over 40 respected experts in the International Association of Genocide Scholars (IAGS), called on Congress to designate the ISIS crimes against Christians and other minorities ‘genocide’ and went further to call for concrete international action to prevent future atrocities. “ISIS leaders should be prosecuted in the International Criminal Court (ICC) for their crimes. The U.N. Security Council should refer ISIS crimes to the ICC for investigation and prosecution. The UN and Regional Organizations should act swiftly and firmly, and follow-up with police force to arrest ISIS leaders,” stated the letter by Genocide scholars, available here: https://anca.org/wp-content/uploads/2015/12/IAGS-An-Appeal-to-the-United-States-Congress-from-Genocide-Scholars.pdf

Prior to Chairman Royce’s joint Congressional letter, Rep. Mike Pompeo (R-KS) sent his personal appeal to Secretary Kerry, questioning the distinction being placed between the plight of Yezidis as opposed to Christians and other minorities targeted by ISIS in the Middle East, stemming primarily from a recent U.S. Holocaust Museum report which focused primarily on Iraq’s Nineveh province as opposed to Iraq and Syria overall. “ISIS targets Christians on the bases of their religious identity, without regard to where they are located. It is imperative that the State Department approach its decision for genocide designation in terms of which religious minorities are being persecuted, rather than where they live,” stated Rep. Pompeo. View Rep. Pompeo’s letter here: https://anca.org/wp-content/uploads/2015/12/120415_Pompeo_ChristianGenocide.pdf

Senators and Representative have introduced a number of resolutions referencing the ISIS actions against Christians, Yezidis and other minorities ‘genocide,’ though no vote has yet been scheduled on any of these pieces of legislation.

The resolution with the greatest Congressional and grassroots support is led by Congressman Fortenberry and Congressowman Eshoo. With over 160 cosponsors, H.Con.Res.75, which the IDC supports, expresses the “sense of Congress that those who commit or support atrocities against Christians and other ethnic and religious minorities, including Yezidis, Turkmen, Sabea-Mandeans, Kaka‘e, and Kurds, and who target them specifically for ethnic or religious reasons, are committing, and are hereby declared to be committing, ‘war crimes,’ ‘crimes against humanity,’ and ‘genocide.'”

The ANCA has teamed up with IDC to set up an action alert urging Congressional support for H.Con.Res.75, which is available at:
http://cqrcengage.com/anca/app/onestep-write-a-letter?3&engagementId=133373

Earlier this week, Senator Bill Cassidy (R-LA) introduced S.Res.340, a resolution “expressing the sense of Congress that the so-called Islamic State in Iraq and al-Sham (ISIS or Da’esh) is committing genocide, crimes against humanity, and war crimes, and calling upon the President to work with foreign governments and the United Nations to provide physical protection for ISIS’ targets, to support the creation of an international criminal tribunal with jurisdiction to punish these crimes, and to use every reasonable means, including sanctions, to destroy ISIS and disrupt its support networks.” The resolution, cosponsored by Republican Presidential Candidate Marco Rubio (R-FL), and Senators Mark Kirk (R-IL), Joe Manchin (D-WV), and Roger Wicker (R-MS), notes that “communities of Assyrian Chaldean Syriac, Armenian, Evangelical, and Melkite Christians; Kurds; Yezidis; Shia and Sunni Muslims; Turkmen; Sabea-Mandeans; Kaka‘e; and Shabaks have been an integral part of the cultural fabric of the Middle East for millennia.”

Congressman Rohrabacher has introduced H.R. 4017, a bill which would expedite the processing of immigrant and refugee visas for Christian and Yezidi victims of ISIS genocide. Rep. Tulsi Gabbard (D-HI) had earlier introduced a similar resolution (H.Res.435).

A number of Senate and House resolutions have noted that ISIS has “threatened genocide” against Christians and other minorities including, S.2377, introduced by Senate Democratic Leader Harry Reid (D-NV) and H.R. 4208, introduced by Rep. Scott Rigell (R-VA).

H.Res.440, spearheaded by Rep. David Trott (R-MI) and Brad Sherman (D-CA), calls for for “urgent international action on behalf of Iraqi and Syrian civilians facing a dire humanitarian crisis and severe persecution because of their faith or ethnicity in the Nineveh Plain region of Iraq and Khabor, Kobane, and Aleppo regions of Syria.” The resolution, which has over 15 cosponsors, specifically notes that Islamic extremist attacks “have had a particularly severe effect on ethnic and religious minority communities such as Assyrian/Chaldean/Syriac Christians, Armenians, Yezidis, Shabak and other minorities in the region.”

IDC_ADFA_ANCA_WH.jpg: In Defense of Christians, A Demand for Action and ANCA leaders at the White House making the case for a US designation of ISIS anti-Christian attacks as ‘genocide’