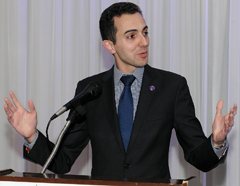 Q- Talk to us about ANCAustralia’s achievements/successes during the past few years?

A- The Armenian National Committee is a global network of dedicated Armenian’s who stand shoulder to shoulder in defending the rights of Armenia, Nagorno-Karabakh and our respective diasporan communities around the world. This is no different in Australia.

Over the past four years ANC Australia has evolved to become a truly leading voice for the Armenian-Australian community. Through the establishment of a full-time staffed office we have been able to achieve great success. Over the past twelve months we have seen our advocacy rise to new heights: the New South Wales Parliament resolution recognising the Republic of Nagorno-Karabakh and its right to self-determination, twin motions in the NSW Parliament reaffirming the historical reality of the Armenian Genocide and formally recognising the genocides against the Assyrian and Greek people, the first ever Parliamentary Delegation from Australia to visit Armenia & Nagorno-Karabakh led by ANC Australia and ensuring the noted genocide denier Justin McCarthy doesn’t have the opportunity to spread his denialist views on the Armenian genocide.

Q- What is according to you, the the key to your success?

A- ANC Australia’s success comes down to a few very simple elements, a young, dedicated team who passionately believe in the Hai Tahd cause. An important mix to that is the true grassroots nature that the ANC family is.

Q- With the approach of the Armenian Genocide centennial, what are some of the important challenges you face or will be facing?

On a daily basis, more and more people around the world are being better educated on the historical reality of the Armenian genocide. This will help further educate society on the atrocities committed in 1915.

As we move towards 2015 the challenges will intensify however ANC will be on he front lines defending the rights of our people.

Q- Can you describe the course of the successful adoption of the NKR recognition bill by the NSW parliament? What were some of the challenges ANC Australia was facing at the time and how did you succeed?

A- Nagorno-Karabakh is on the highest policy position of ANC Australia. After many months of work, the NSW Parliament passed a unanimous motion recognising the Republic of Nagorno-Karabakh and its right to self-determination.

You can image the pressure excerpted by the Azeri and Turkish lobby after the motion that was passed. It’s always a challenge, but a challenge that our community and the global Hai Tahd family stands up to on a daily basis.

In a democracy when Members of Parliament are presented with facts they are free to make their own decisions. We help facilitate the education process and the rest comes down to a vote on the floor of parliament.

Q- What does the future hold for the ANC Australia? Any particular plans, partnerships, foreseeable challenges?

A- There is a lot in store but I’m going to have to keep you waiting….