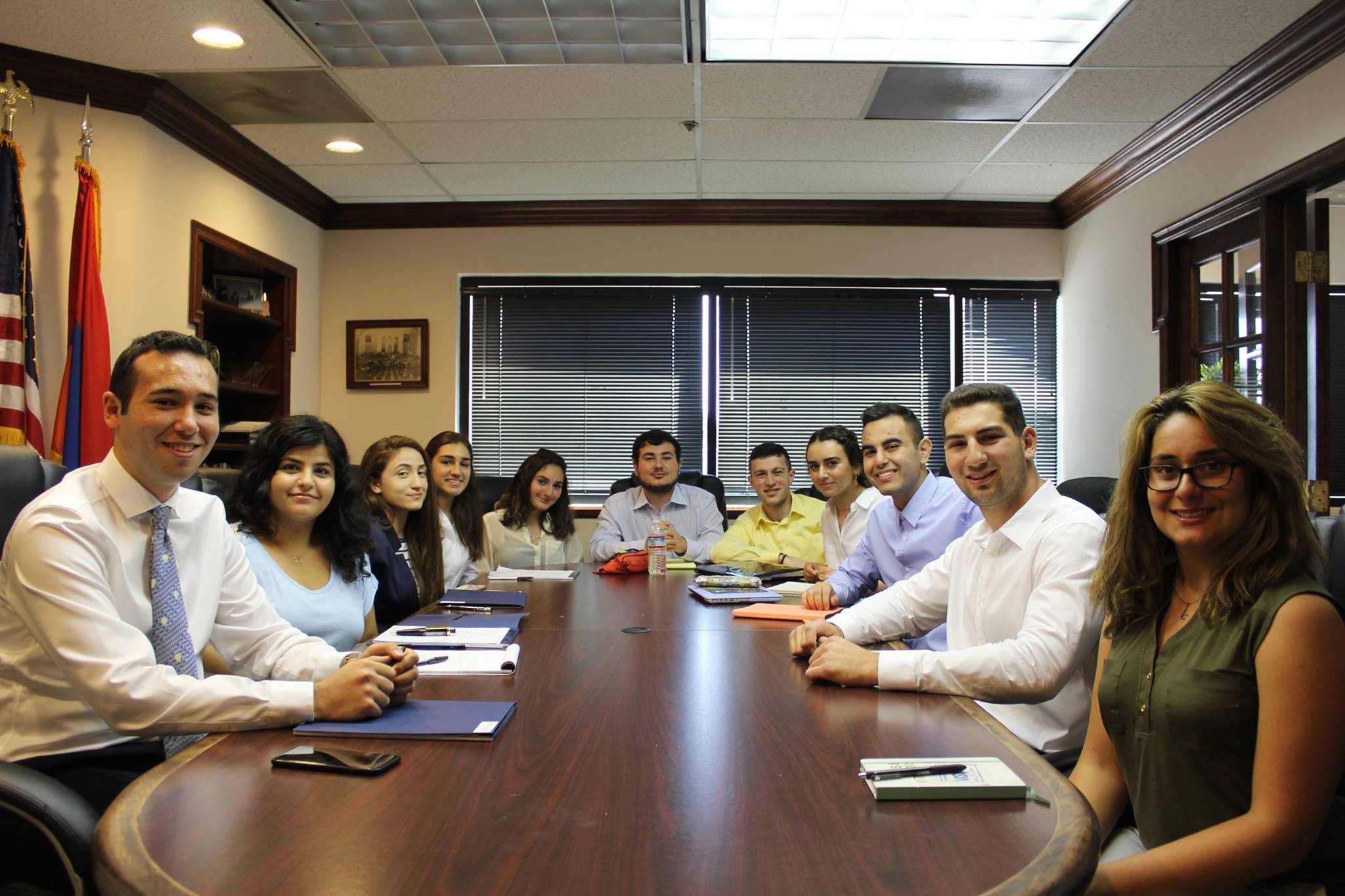 The third week of our internship at the ANCA-Glendale consisted of our cooperation with the Western Region interns again in discussing issues that concern our local, national and international Armenian communities led by Razmig Sarkissian. We also connected with Tereza Yeremyan, former ANCA Western Region’s Government Affairs Director, who is now in charge of the ANCA Leo Sarkisian internship program in Washington D.C.

On Monday, we made our way to the Western Region office where Razmig Sarkissian initiated a discussion about being an effective leader and a community organizer. This led to us discussing the different issues we know of in our local, national and international Armenian communities. At the local level, we identified issues such as lack of representation in the local government, the rise of rent prices, and increased assimilation. At the national level, we are faced with Turkish lobbyists combating our initiatives, lack of representation of Armenians in the media, as well as, the recognition of Armenians as a minority. Looking at the bigger picture, we recognized issues in Armenia and Armenia’s diaspora. These included the lack of Armenian military power, emigration from Armenia, and the abuse of the environment. It was alleviating that along with the issues we were able to recognize, we were simultaneously coming up with different ways with which we are able to combat them. Especially at the local and national levels, we realized that we each can do our little part to move in the right direction.

On Tuesday and Wednesday we spent our time at the Glendale Youth Center office discussing various issues that were especially important to us and coming up with concrete steps to overcoming them. One concern of ours is the declining use of Armenian within the Armenian youth. We see this as a challenge that every individual can have an impact on. We have decided to communicate strictly in Armenian at the office and have even begun texting in Armenian with Armenian letters. Another step we are taking is making sure our youth has material to read in Armenian that reflects their interests. We each will soon be writing pieces about pop culture and publishing them in hopes of producing non-intimidating Armenian reading material that will encourage the youth to read more in our native language.

On Thursday we had the chance to speak with Tereza Yeremyan in Washington D.C. and she filled us in about what the interns are doing there as well as ANCA-Washington D.C.’s efforts at Capitol Hill. The current interns at D.C. are all working on various projects, one of which being Advocate For Artsakh. This thunderclap campaign advocates for demining, securing borders and providing rehabilitation assistance. Additionally, we were informed about the different ways that the ANCA raises awareness regarding the Armenian cause. They promote positive federal relationships that contribute to trade and aid to both Armenia and Artsakh, security and safety in Artsakh, and of course the recognition of the Armenian genocide. ANCA also provides opportunities like the ANCA Hovig Apo Saghdejian Capital Gateway Program and the above mentioned Leo Sarkisian Internship Program that give Armenian youth, from all over the nation, a chance to go to D.C. and gain experience in various fields. This way, interest in working in D.C. increases amongst our youth and we are able to have advocates for the Armenian cause in powerful positions. ANCA-Washington D.C. also partners up with various organizations and creates a great network for their interns, allowing them to make connections and potentially find jobs in D.C. that suits their best interests.

This third week of this internship has been all about coming together and making the changes we want to see in our communities all the while looking beyond them to the bigger picture and being able to understand the real impact we, as individuals, can make.

Make your impactful contribution and #AdvocateForArtsakh by clicking here: www.anca.org/artsakh

During our second week as ANCA Glendale interns, we learned about Asbarez, met Glendale City Council Member Zareh Sinanyan, were introduced to the ANCA Western Region Hye Votes campaign, and engaged in an informative discussion with GUSD Board of Education President, Nayiri Nahabedian.

On Monday, we visited Asbarez and met with the English Editor, Ara Khachatourian. He introduces us to the history of Asbarez and the importance of having a media outlet for the Armenian community. Founded in Fresno in 1908, Asbarez covered the Armenian Genocide and the establishment of the first Armenian Republic among other historical events. In 1997, Asbarez became the first Armenian newspaper to have a website, and published both in English and Armenian. Since Asbarez is in direct contact with Armenia, when something occurs regarding Armenia, non-Armenian media sources seek out Asbarez as a reliable source. Mr. Khachatourian took us to the archives where we had an opportunity to see Asbarez’s very first publication. Currently, they are working on making all their archived newspapers electronic and accessible to the public. The newspaper is also looking to expand their coverage by adding a S.T.E.M. section where the everso growing fields will be reported on in more detail.

On Wednesday, we met with Glendale City Council Member, Zareh Sinanyan, who has served as the Glendale city Mayor in 2014 and is now continuing his second term in office. Mr. Sinanyan discussed his background and the difficulties he encountered in his efforts in getting elected to city council. Council Member Sinanyan introduced us to some of prevalent issue in Glendale, such as the lack of proportional representation in Glendale city government including the Police and Fire departments, and how he, along with other council members, have worked to increase minority representation in these sectors. We also discussed issues that disproportionately affect the Armenian American population as well as Glendale residents at large, such as affordable housing, rising cost of living and public transportation.

Soon after speaking with Council Member Sinanyan, we joined the ANCA Western Region interns to meet the former Director of the Hye Votes campaign, Anna Arakelyan. The Hye Votes Campaign was initiated by ANCA Western Region in order to educate the Armenian American community about the electoral process, register them to vote and provide electoral assistance during elections. Ms. Arakelyan informed us about the different trends in Armenian voter turnout, and how the Hye Votes campaign has, over the span of many years, build an Armenian political capital by significantly increasing the number of registered Armenian voters, as well as, Armenian voter turnout. She also crushed common myths about registering to vote, such as, registering to vote will make you more likely to be called for jury duty. Ms. Arakelyan also stressed the importance of voting and knowing that each vote is significant in making a difference. We learned about the functions of Hye Votes and how adjustments are made to keep up with the demand of the population that is eager to vote but unable to without assistance.

We concluded the week by meeting with the GUSD Board of Education President, Nayiri Nahabedian. We learned about her inspiring journey of choosing a career path and overcoming the obstacles she was faced with. We also discussed the importance of the Foreign Language Academies of Glendale (F.L.A.G.) program that offers dual immersion language programs. The goals of this program include the development of high levels of language proficiency and literacy in both english and a second language, such as Armenian, as well as, an appreciation and understanding of diverse cultures. In addition, we briefly touched upon the Children’s Savings Account Act that Ms. Nahabedian worked on with Assemblymember Adrin Nazarian. It is meant to tackle wealth inequality and ensure every child has the opportunity, without any financial burdens, to continue their education after high school.

During our first week as interns at ANCA Glendale, we were introduced to the different aspects of this internship such as an outline of the knowledge we would gain upon its completion. In order to familiarize ourselves with the ever-evolving mission of ANCA, we spoke with well-respected individuals like Murad Topalian as well as Elen Asatryan. Furthermore, we expanded our understanding of the responsibilities and structure of local government via a tour of City Hall and an educational from Glendale City Clerk, Ardy Kassakhian.

Specifically, Mr. Topalian told a captivating story of his journey with ANCA, which he began as a vibrant member of the AYF who was passionate about the Armenian cause. Through occasional historical anecdotes, he elaborated on ANCA’s origins and the changes it underwent to become the successful organization it is today.

In our exciting tour of City Hall led by Leo Zalyan, we were able to ask limitless questions regarding the specifics of a successful city government. We also discussed the various uses of tax dollars, as well as the roles and responsibilities of different departments. The following day, an analogy used by Ardy Kassakhian clarified how a corporate model is utilized as the “mirepoix” of local government. For example, he explained how the board of directors of any given business parallel the Council Members of a city, while the position of a CEO translates to the role of City Manager.

The week was concluded with a workshop by former Executive Director of ANCA Western Region, Elen Asatryan, about the ways in which ANCA has built an Armenian political capital in the diaspora from the grassroots up. We examined trends of local government politics throughout the years, and issues the Armenian community has faced.

As the week neared its end, it became evident that we, not only as ANCA Glendale interns but also as members of the Armenian American community, have a responsibility to contribute to local government and to ensure that it represents the people effectively. In essence, this week was a glance into how ANCA’s mission has always been responsive to the changes in the needs of the people it represents, and how we can prepare ourselves to take increasingly active roles in each of our communities.