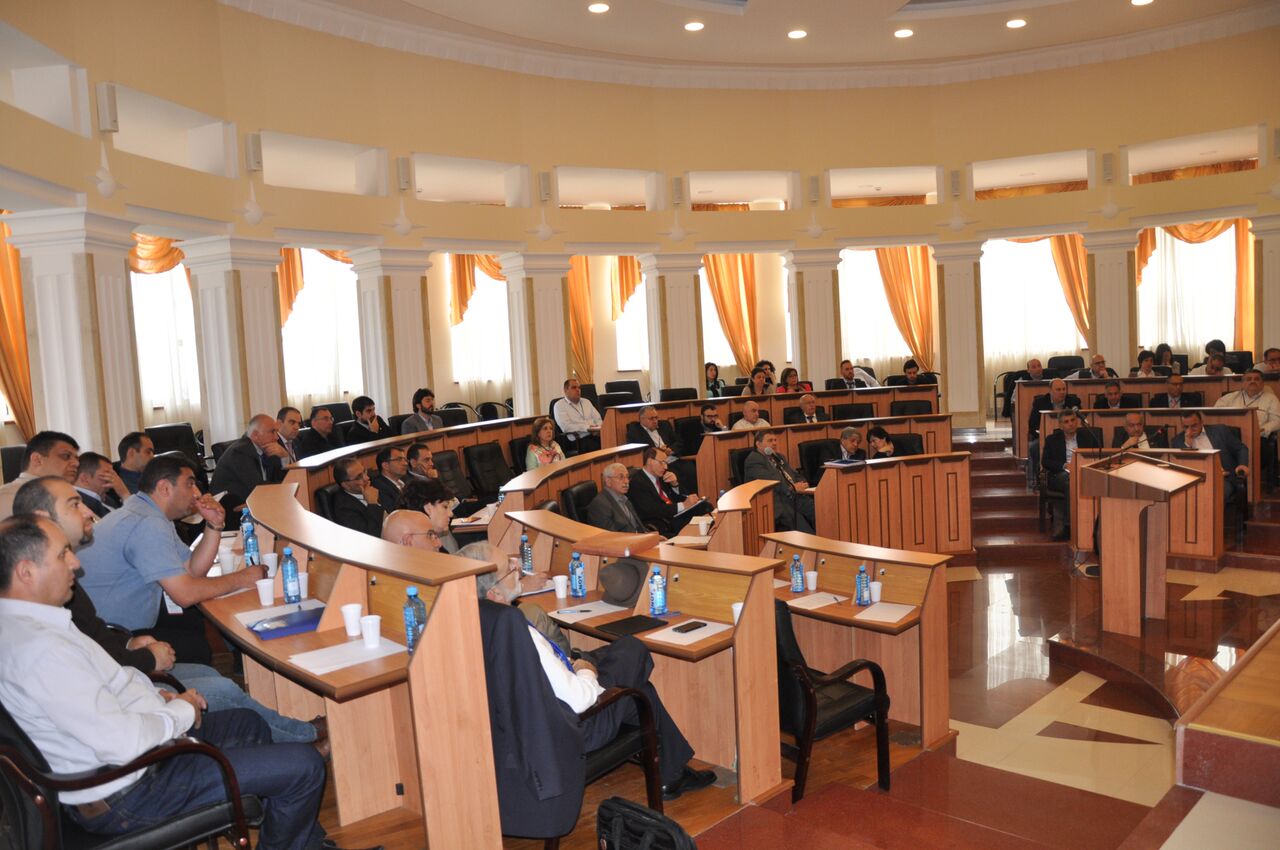 (ARMENIAN WEEKLY) STEPANAKERT, NKR— Representatives of the Armenian Revolutionary Federation (ARF) Hai Tahd committees from 25 regions gathered in Artsakh (Nagorno-Karabagh Republic/NKR) on May 9-11, during a four-day conference that kicked off in Yerevan on May 8. On May 9, the Hai Tahd representatives took part in the celebrations of the 24th anniversary of the liberation of Shushi, Victory Day, and NKR Defense Army Day. The following day, NKR President Bako Sahakyan met with the representatives at the Tigranakert Archeological Museum Center.

According to the NKR President’s office, several issues related to NKR’s domestic and foreign policies were discussed, including Armenia-NKR-Diaspora ties, and current regional developments. Special attention was placed on the large-scale military aggression by Azerbaijani forces on April 2-3, and its consequences. During the meeting, Sahakyan commended the work of the Hai Tahd committees, specifically their pursuit for justice for the Armenian Genocide and their advocacy of the Artsakh cause. Sahakyan also addressed the significance of the conference and praised the initiative.

“The ARF Bureau Hai Tahd conference was an exciting opportunity for our members worldwide to come together in Armenia and Artsakh, review our operations, discuss current issues, and brainstorm new ideas, strategies, and avenues to pursue as we continue to fight for justice for the Armenian people,” Armenian National Committee of America (ANCA) Eastern Region Chair Steve Mesrobian told the Armenian Weekly. “One of the highlights was joining the people of Artsakh in the May 9th liberation of Shushi parade, and spending an afternoon exchanging ideas with Artsakh President Bako Sahakyan,” added Mesrobian.

On May 9, Armenians in Artsakh, Armenia, and around the world, celebrated the 24th anniversary of the liberation of Shushi. In Stepanakert, a military parade took place, during which Bako Sahaykan congratulated the Armenian people on the occasion.

“All our victories are the triumphs of unity and consolidation around the idea of defending the homeland facing danger. I am confident that this spirit will always guide our people and we will celebrate more victories. This is the best way to keep alive the memory of our martyrs. This is the only true path to eternity. This is our only way,” said Sahakyan in his address.

On May 7, Hai Tahd representatives met with Armenia’s Foreign Affairs Minister Edward Nalbandian. During the meeting, Nalbandian presented the current situation in Artsakh, Azerbaijan’s military operations targeting NKR, and the efforts to address the consequences of the recent violence. Other issues that were discussed included the international recognition of the Armenian Genocide and the economic development of Armenia. Strengthening Armenia-Diaspora relations and the steps being taken in that regard were also discussed.

Participants also addressed the situation in the Middle East, including the crisis in Syria, the international struggle against terrorism, and other international and regional matters.

Der-Khachadourian: We Cannot Allow Azerbaijan to Pave Path towards Genocide

“We cannot allow Azerbaijan to pave a path towards a new genocide—permanently separating Artsakh from its Armenian population—through its aggressive policies,” said ARF Hai Tahd Central Council representative and Bureau member Hagop Der-Khachadourian in an interview with NKR-based news outlet Aparaj.am on May 10.

Der-Khachadourian added that the human rights violations and the killings of peaceful civilians by Azerbaijani forces should be internationally condemned and that the ARF Hai Tahd offices are currently pursuing that issue on three levels: struggling against anti-Armenian propaganda; addressing the issue of war-crimes; and the international condemnation of Azerbaijan’s conduct.

“We must reach a point when the international community cannot consider it an option for Artsakh to be a part of Azerbaijan,” Der-Khachadourian was quoted as saying.