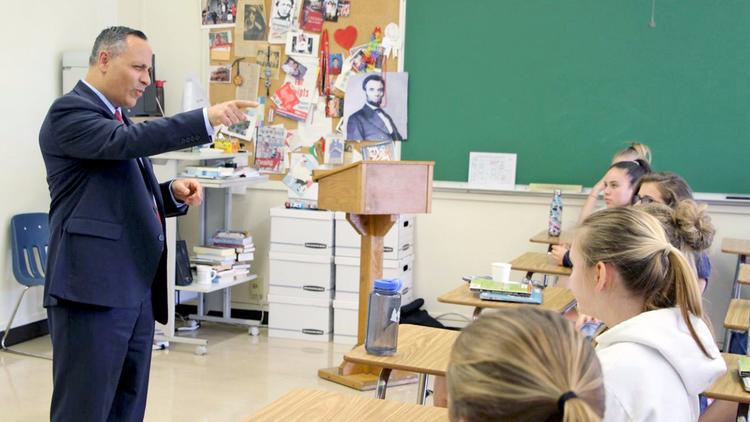 ‘If a crime is unpunished, it very well will be repeated’: Discussion sheds light on Armenian Genocide remembrance

(LA Times) Flintridge Sacred Heart Academy students contemplated human rights Tuesday when visitor Raffi Hamparian, chair of the Armenian National Committee of America, spoke about the Armenian Genocide, the persistence of its deniers and how to keep history from repeating itself.

His visit — made at the request of FSHA senior Lara Minassians, founder and president of the school’s Armenian Club — fell one day after Armenian Genocide Remembrance Day, a commemoration marked by Armenians worldwide.

“I thought this would be a perfect way to inform people about what happened,” said the 17-year-old Glendale resident. “Something so important should be known — if your peers don’t know about it, there’s no effort or awareness to correct it.”

Starting in 1915, an estimated 1.5 million Armenians were massacred at the hands of the Ottoman Turks while many more were displaced from their homes during a perilous mass migration. Modern-day Turkey still denies the World War I-era deaths were genocide, a claim the U.S. government has left largely unchallenged.

In three classroom talks, Hamparian encouraged students to be “upstanders,” who speak out against wrongs, rather than hapless bystanders.

“All of us think we would never be bystanders to something wrong,” he said. “But the truth is the difference between being an upstander, and someone who challenges something like that, and being a bystander is a very fine line.”

Hamparian shared the story of William Proxmire, a Democratic senator from Wisconsin who delivered 3,211 speeches on the Senate floor from 1967 to 1986 urging the federal government to adopt the United Nations Convention on the Prevention and Punishment of the Crime of Genocide.

In 1988, one week before the senator’s 73rd birthday, the Proxmire Act was signed into law.

“That milestone was accomplished because one man believed so fiercely in the concept of living in a world without genocide,” he told students in English teacher Mark Bernstein’s class.

The speaker discussed genocide denial, a phenomenon Holocaust survivor Elie Wiesel described as a “double killing” in that it purges not just lives, but also the memories of those lives. Hamparian categorized denial in the United States and Turkey as a sophisticated convolution of facts, strengthened by economic ties.

Beyond the willingness of nation states to address history’s wrongs, individuals have a powerful role to play in preventing future genocides, Hamparian said. The first step is education.

“If a crime is unpunished, it very well will be repeated,” Hamparian said. “That’s why from us it’s required to be eternally vigilant. I think we honor the victims by making sure the next genocide doesn’t occur.”

Sophomores Grace Lawlor and Julia Powers said the discussion made them think more deeply about a subject only briefly touched upon in history textbooks.

“Obviously, politics is very complicated, but I don’t think it’s OK that the United States and Turkish governments are completely denying it,” Lawlor said. “They have to take action.”

Compared to the Holocaust, which is much more documented and discussed in the traditional school curriculum, Powers said the Armenian Genocide is barely covered in school.

“Considering how many Armenians were persecuted, I feel it was another holocaust,” she said.