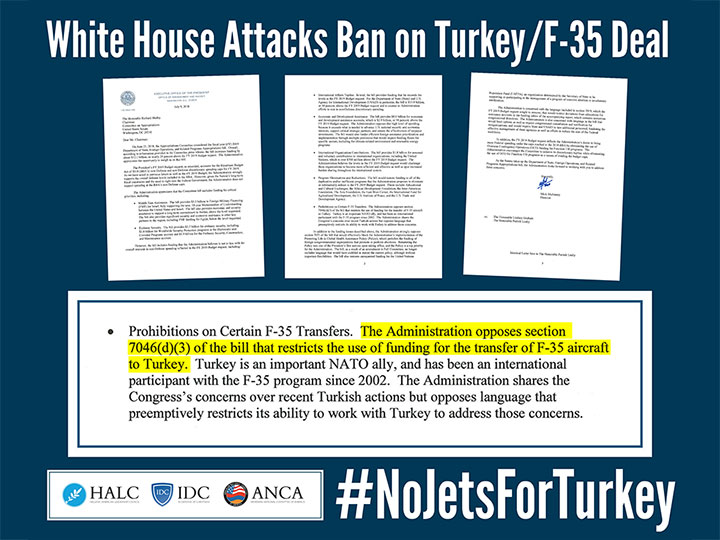 The Trump Administration relayed its position in a letter from Mick Mulvaney, Director of the Office of the Management and the Budget, to Senator Richard Shelby, the Chairman of the Committee on Appropriations. In his letter, Director Mulvaney wrote:

“The Administration opposes section 7046(d)(3) of the [Department of State, Foreign Operations, and Related Programs Appropriations] bill that restricts the use of funding for the transfer of F-35 aircraft to Turkey. Turkey is an important NATO ally, and has been an international participant with the F-35 program since 2002. The Administration shares the Congress’s concerns over recent Turkish actions but opposes language that preemptively restricts its ability to work with Turkey to address those concerns.”

“President Trump’s opposition to the bipartisan consensus around common-sense restrictions on the reckless transfer of F-35 aircraft to Turkey dramatically reduces American leverage, undercutting our ability to secure either Turkey’s release of Pastor Andrew Brunson or to prevent Turkey’s purchase of Russian S-400 anti-aircraft missiles.

We encourage Congressional leaders to move quickly to enact statutory restrictions on F-35 and other advanced weapons sales/transfers to Turkey, and, more broadly, to undertake a long over-due policy review of U.S. relations with the increasingly hostile Turkish regime.”