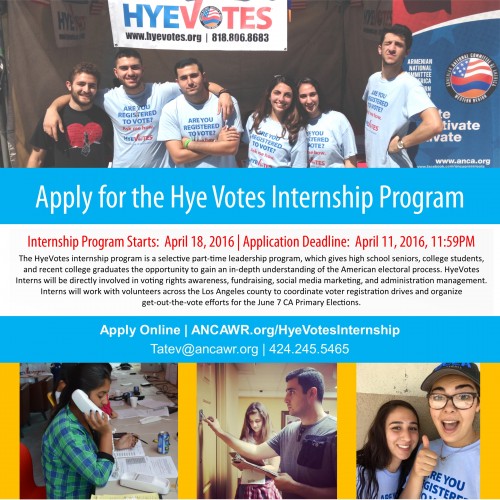 “This is a unique opportunity for anyone interested in making a difference in their community and being involved in or pursuing a career in community organizing, campaigns, and politics. During the 20-hour work week, interns will serve as liaisons between the community and the HyeVotes campaign itself, understanding more about real-world applications of the electoral process, developing communication and leadership skills, and growing as young professionals,” said Deputy Campaign Director Tatev Oganyan.

The ANCA-WR launched the HyeVotes Campaign in 2012, as a region wide, non-partisan initiative to engage community members in the electoral process. HyeVotes intends to register and encourage the community to vote in elections, while also serving as a source of voter information. Since the start of the HyeVotes initiative, over 15,000 new Armenian American voters have been registered.

“As the 2016 Primary Elections in California are right around the corner, we need to take the history we made on the streets of Los Angeles last year at the March for Justice to the ballot box and ensure we elected candidates who will truly represent our community’s interests. The Hye Votes Program intends to do exactly that by educating and empowering Armenian Americans to have a real voice in the electoral process,” said ANCA-WR Executive Director Elen Asatryan. “As always, the ANCA-WR utilizes every opportunity to provide the pipeline of support to our youth to develop professionally and become civically engaged. The Hye Votes Internship Program is yet another one of those opportunities,” she added.

Interested and qualified candidates must complete the internship application online at www.ANCAWR.org/HyeVotesInternship. The internship begins on April 18, 2016. Space is limited and applications will be accepted until April 11, 2016.