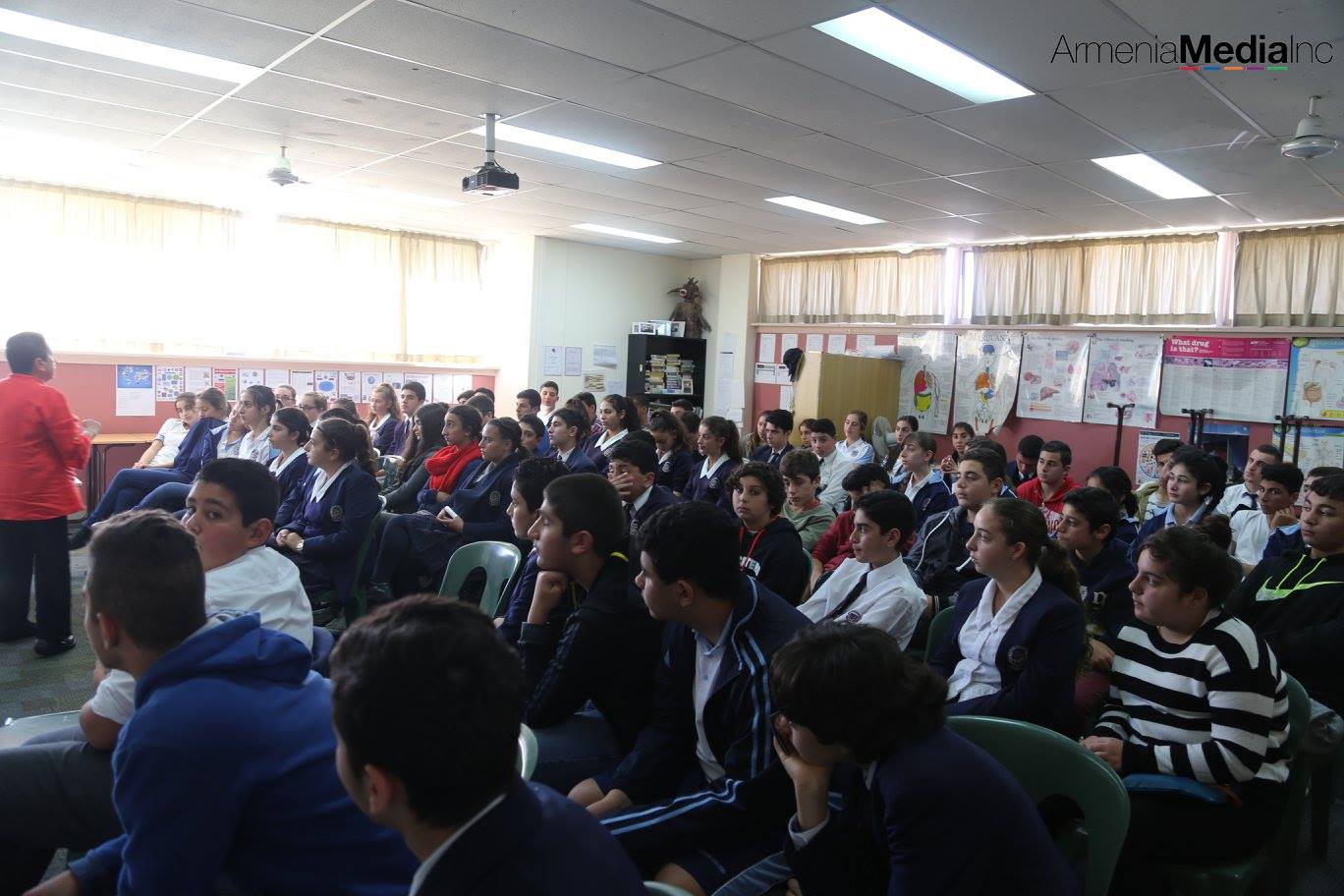 The Seminar featured activities connecting the students to their roots in Western Armenia, which has been part of Eastern Turkey since the Armenian Genocide between 1915 and 1923. It also featured workshop lectures by prominent educators, Professor Colin Tatz, Dr. Panayiotis Diamadis, Vicken Babkenian and Pam Tatz.

Students began the day in a combined session, where they heard speeches outlining the vision of the event and watched videos including Armenian Genocide survivor testimonies and evidence of the current Turkish state’s denial campaign that has left this crime against humanity unpunished.

The lecturers focused their interactive workshops on Denial, Australia’s relief effort, and the history of the Armenian Genocide. Students asked questions and were fully engaged during these sessions.

AYF Australia had printed a giant map of Western Armenia. All students who participated revealed where their ancestors were from pre the Armenian Genocide, and their names were put on labels and stuck onto the relevant region on the map.

AYF Australia also conducted a social media campaign titled #WhereImFrom, which allowed students to poise with a placard and post their roots on Facebook, Instagram and Twitter. Lunch was provided by the AYF Australia members, who had over 40 members in attendance.

“This event was unprecedented in Australia and sent a clear message to the denialist government of Turkey that our battle for justice will not ease after 100 years,” said one of the organisers, Haig Kayserian.

“We gathered over 300 of our youngest descendants of the Armenian Genocide in faraway Australia, and they declared that they will continue to fight the good fight until justice is achieved in the name of their ancestors. This means Armenians will achieve justice.”

A letter was drafted to the NSW Turkish Consul-General on behalf of the attending students, and presented by seniors at the Armenian Genocide Protest in Sydney, which occurred later on that day. 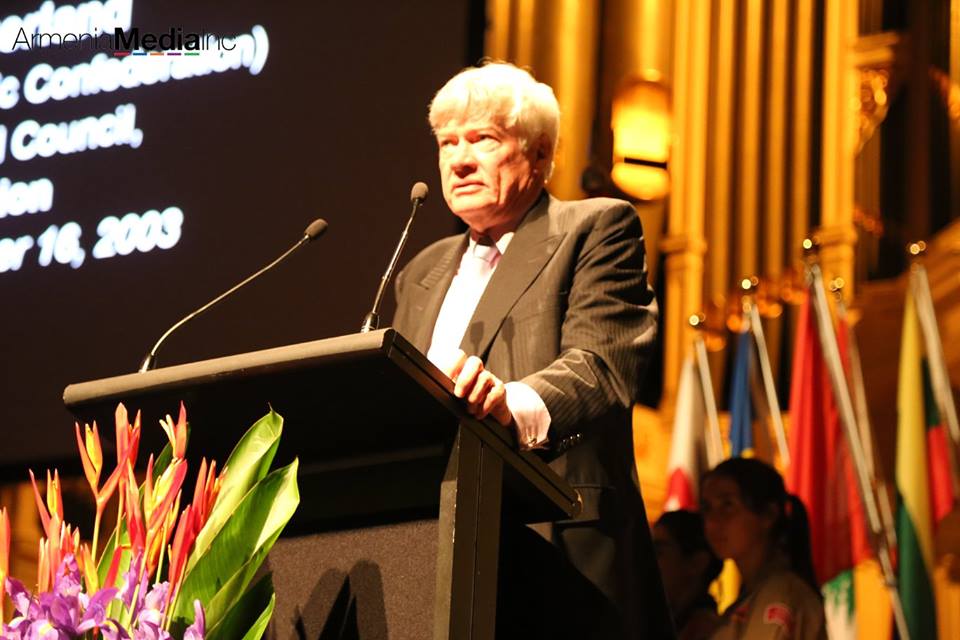 SYDNEY: Geoffrey Robertson QC earned a standing ovation after delivering a powerful keynote address at the National Armenian Genocide Centenary Commemoration Evening at Sydney Town Hall, unequivocally proving that the massacres and forced deportations of Armenians in Ottoman Turkey in 1915 was genocide, while calling out the Australian government for bowing down to pressure by Turkey on this issue.

Robertson told the over 2,200 in attendance: “Isn’t it ironic that here we are, 100 years after (Gallipoli), celebrating the courage of young Australians in facing Turkish bullets, and we have a government that lacks the courage to stand up to Turkey?”

“I can’t refute what is obvious to every honest scholar, that what went on in 1915 was genocide.”

This keynote address came on a day that Australian media reported that Australia’s Treasurer, Joe Hockey was gagged by the government from speaking at the event after pre-ANZAC Day meetings in Turkey between Prime Minister Tony Abbott and Turkish Prime Minister, Ahmet Davutoglu.

Long-time Armenian Genocide recognition advocate Hockey, who was in the audience, maintained that his views on the Armenian Genocide had not changed and he was attending the Commemoration to hear Robertson’s keynote and reflect on the Centenary with his Armenian audience rather than speak himself. 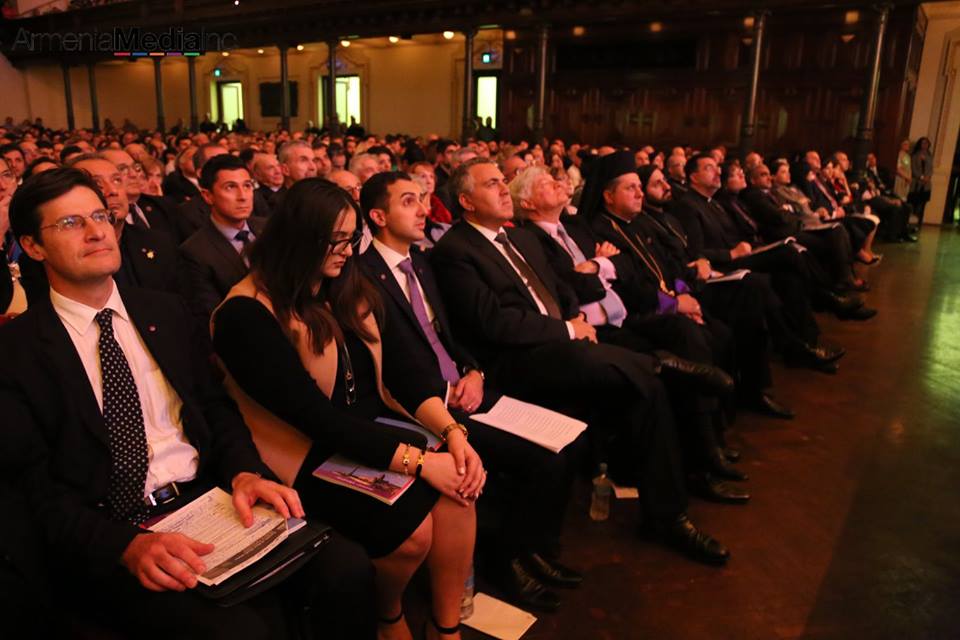 Hockey, who has Armenian roots, did release the following statement to the organising Committee for the event, correctly referring to the Armenian Genocide as he always has in his political career.

The statement, in part, read: “… proper recognition of historical truths, such as the Armenian genocide, will steal us all to be ever vigilant against any attempt to repeat this horrific event against ourselves or future generations.”

A Commemoration Evening was also held in Melbourne, Victoria where over 1,000 guests were in attendance to hear from keynote speaker, Nikki Marczak.

A Commemorative Play was performed in Adelaide, South Australia for the week leading up to April 24th.

April 24th 2015, 100 years to the day the Armenian Genocide began, saw an unprecedented level of media across coverage across mainstream Australian print, radio and television outlets.

A sample of those article and interviews can be found below: 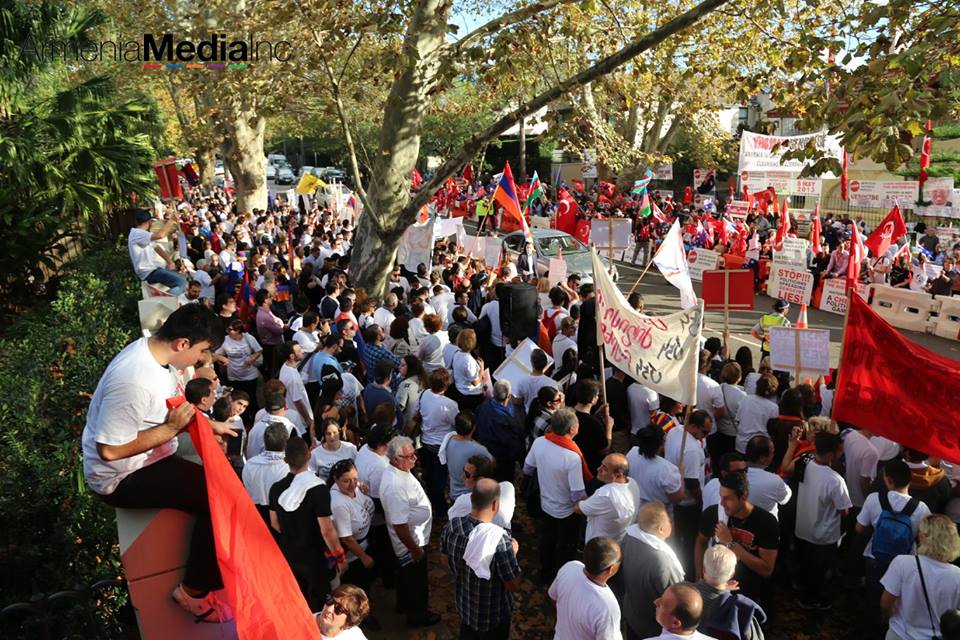 SYDNEY AND MELBOURNE: Over 1,500 Armenians in Sydney and 500 Armenians in Melbourne protested for justice for the Armenian Genocide at their respective states’ Turkish Consulates on Friday, 24th April 2015.

In Sydney, the Armenian protesters were greeted with around 500 Turkish counter-protestors, who went on to play loud music and dance in an attempt to silence the protesters. They were not successful, with the message heard loud and clear by a crowd intent to mark the Centenary of the Armenian Genocide as a new beginning in advocacy efforts to ensure the crime is punished.

Chants from the strong Armenian crowd, who arrived at the Protest in over a dozen buses, included “WE WANT JUSTICE”, “TURKEY FAILED”, “SHAME TURKEY SHAME”, among others. Armenian Protest banners and flags created a new cover for Sydney’s Eastern Suburbs.

“We will not repent until justice is achieved,” said Armenian Youth Federation of Australia (AYF Australia) member, Aram Tufenkjian.

Panos Borghonzian, also of AYF Australia, added: “We stand here to say that our battle for justice will only have one result; victory. Until this is achieved, and Ararat returns to Armenia, we will not stop.”

A Seminar titled “A JOURNEY TO YOUR ROOTS” took place at Galstaun College earlier in the day, with over 300 Sydney Armenian school students in attendance, and a letter was read out to the NSW Turkish Consul General from the participating students. The letter was not accepted by the Consulate.

Not far from the Protest site, in Bondi, the words “TURKEY FAILED” was written into the sky, arousing the interest of many thousands, who took to social media and were educated about the Armenian cause.

In Melbourne, over 500 Armenians marched from Federation Square to the Turkish Consulate chanting “WE WANT JUSTICE”, “TURKEY IS GUILTY, TURKEY MUST PAY”, “GET YOUR HANDS OFF OUR LANDS”, etc. At the Turkish Consulate, some 150 Turkish counter-protestors gathered but failed to disrupt proceedings.

The protests were organised by the Armenian Genocide Centenary Commemoration Committee in Australia.

Smaller protests were organised in the barely Armenian-populated states of Queensland and Western Australia.