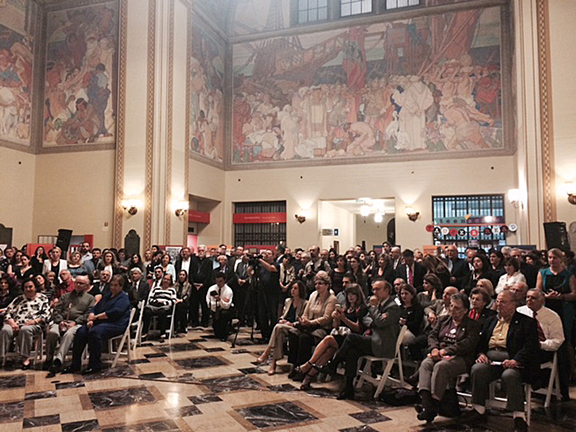 Community is encouraged to visit Exhibit by April 30th

LOS ANGELES—On Friday March 6, the intrigue and excitement was palpable in the Rotunda of the Los Angeles Public Library where over 300 community members, elected officials and special guests congregated as the Armenian National Committee of America-Western Region’s “America We Thank You: An Armenian Tribute to Near East Relief” Committee, in sponsorship with Los Angeles Mayor Eric Garcetti, Los Angeles Councilmember Paul Krekorian and the Los Angeles Public Library, premiered Near East Foundation’s traveling Exhibit, “They Shall Not Perish: The Story of Near East Relief.”

“One hundred years ago, an unprecedented American-led relief effort thwarted the Turkish scheme of completely annihilating the Armenian race, as it brought to the world’s attention the harrowing facts of the brutal slaughter of 1.5 million Armenian men, women and children, the criminal act for which the very word ‘genocide’ was even coined,” remarked AWTY co-chair, Vanna Kitsinian, Esq. “Our premiere of this compelling Exhibit—which illustrates the historical moment when American and Armenian histories so pivotally intersected—in the nation’s second largest city, home to the largest concentration of Armenian-Americans, is one of the ways we are continuing to spread awareness of Near East Relief’s historical legacy from 1915-1930 as it rescued and rehabilitated the destitute Armenian refugees and impoverished orphans whose livelihood has thus ensured our existence as a thriving Armenian Nation today. After months of collaboration with the Near East Foundation, the successor of Near East Relief, we are proud that Near East Foundation chose us to premiere its traveling Exhibit,” added Kitsinian.

“The Near East Relief ensured the survival and sustenance of the Armenian people through its network of 400 orphanages, hospitals, clinics, clothing distribution centers, and vocational schools that provided shelter, nourishment, clothing, medical treatment, and a means for our ancestors to build and re-build their lives that were devastated by Genocide,” stated AWTY co-chair Hermineh Pakhanians. “This heroic feat was funded by the $117 million the Near East Relief raised from concerned citizens in America and throughout the world from 1915-1930, a staggering figure which is equivalent to almost $3 billion today. This story is a testament of how the American people, not just the government or politicians, but average American citizens, changed the course of history, and our committee’s purpose is to acknowledge this American benevolence and generosity,” added Pakhanians.

Special guests Leslie Diane Coogan Mitchell and Keith Coogan, daughter and grandson respectively, of the most famous American child actor in the 1920’s, Jackie Coogan, were in attendance and received great applause when acknowledged by AWTY co-chairs during the program.

In 1924, the Near East Relief launched the “Children’s Crusade,” wherein every school child in the United States was encouraged to participate in collecting donations, clothing and non-perishable food for shipment to children overseas, and the child actor Jackie Coogan, arguably Hollywood’s first humanitarian piloted his “Milk Train” across the United States which made stops in every major U.S. city to collect the cans and cases of milk, boxes and packages of food, and money raised, which totaled over $1 million for shipment overseas. Jackie Coogan’s tour received unprecedented media coverage in the U.S. through newspapers, magazines, and newsreels.

One of the Exhibit’s panels is dedicated solely to Jackie Coogan and alongside archival photographs, narrates his invaluable contribution to Near East Relief’s fundraising efforts spearheaded by the children of America for the orphaned Armenian children.

“This extraordinary exhibit will give thousands of Angelenos the opportunity to learn about America’s generous humanitarian support for the Armenian people in our time of great need,” said Los Angeles City Councilmember Paul Krekorian. “I’m incredibly proud that the City of Los Angeles provided funding for and co-sponsored the Exhibit, and I look forward to bringing my family and friends to see it. There is no better way to learn about the bond shared by the American and Armenian people as we kick-off our local commemoration of the Armenian Genocide Centennial,” said Krekorian.

“The Los Angeles Public Library believes in telling and celebrating stories,” said City Librarian John F. Szabo. “We serve the largest and most diverse population of any in the nation, and we are proud to host this Exhibit and share this heroic story,” added Szabo.

“The Exhibit begins with a story of great sadness, but it grows to encompass stories of unparalleled courage, generosity, and hope,” remarked Director and Curator of Near East Relief Historical Society, Molly Sullivan, Esq. “Each viewer becomes a part of the Exhibit as they learn about this vital historical period, and go on to share this knowledge with their friends and family,” continued Sullivan.

Ani Boyadjian Boghigian, Principal Librarian of Research & Special Collections, was thanked in the remarks by the AWTY co-chairs and Councilmember Krekorian for being instrumental in facilitating the Exhibit’s premiere at LA Public Library, whose 5,500 daily patrons will have the opportunity to view the Exhibit until April 30, 2015.

“On the eve of the Armenian Genocide Centennial, as we remember and honor the martyred lives of our 1.5 million ancestors who suffered the perils of forced deportation and tragic death, we also pay special tribute to all those who heard the Armenian pleas for help, and responded swiftly and generously on an unprecedented and almost unimaginable scale. On behalf of every Armenian life Near East Relief rescued, we collectively echo, “America, We Thank You,” remarked ANCA-WR Executive Director Elen Asatryan. “We highly encourage our Armenian-American community in Southern California to take their family and friends and visit the Los Angeles Public Library’s Central branch from now until April 30 to witness firsthand this exceptional Exhibit in honor of such a magnanimous story,” added Asatryan.

After the program, guests continued to peruse the impressive Exhibit, with its 28 color panels measuring an impressive six feet by three feet, which is comprised of high-quality scans of official correspondence, biographies of missionaries and relief workers who lived, volunteered and served on the ground, and includes treasured archival photographs, some of which have only recently been accessed, offering new insight to NER’s impactful legacy in saving a people under the threat of total annihilation.

The Near East Relief commissioned leading artists of the day to design impactful posters depicting the suffering and plight of the Armenian victims, which were circulated throughout the United States and the world to raise awareness and inspire the donation of funds for the relief efforts.

Guests were invited to participate in a silent auction featuring originals of two of these iconic posters printed in 1918.

Anoush Catering graciously catered hors d’oeuvres, and Remedy Liquor donated wine and refreshments for the evening’s reception, which was open to the public and free of charge.

Photo: Capacity crowd assembles for premiere of traveling Exhibit, “They Shall Not Perish: The Story of Near East Relief” in LA Public Library’s Rotunda.