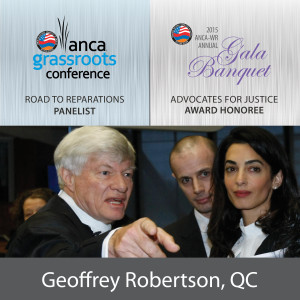 Attorney and renowned human rights advocate Geoffrey Robertson, QC, will pull double-duty later in October, when he will be a featured panelist during the Armenian National Committee of America-Western Region’s Grassroots Road to Reparations panel and will also receive the ANCA-WR Advocates for Justice Award at the organization’s annual Gala Banquet.

The ANCA-WR Grassroots Conference will take place on October 23 and 24 at the Hyatt Regency Century Plaza Hotel, with the centerpiece Gala Banquet, celebrating the organization’s accomplishments on Sunday, October 25 at the grand ballroom of the same hotel.

Robertson is an international jurist, human rights lawyer, and academic. His latest book is An Inconvenient Genocide: Who Now Remembers the Armenians? In recent years, he has been particularly prominent in the defense of Julian Assange and WikiLeaks. He also represented author Salman Rushdie, and prosecuted General Augusto Pinochet. In 2008, the United Nations (UN) Secretary General Ban Ki-Moon appointed him as a “distinguished jurist” member of the UN’s Justice Council, which nominates and supervises UN judges. His memoir, The Justice Game, has sold more than 150,000 copies.

Robertson is a founder and joint head of Doughty Street Chambers, a prestigious law firm in England that has dealt with numerous international legal cases. Among the associates of the law firm is human rights advocate Amal Alamuddin Clooney, who along with Robertson will be recognized as a recipient of the ANCA-WR “Advocates of Justice” Award, with Robertson set to accept the award on her behalf.

In January of this year, Robertson and Clooney represented Armenia at the European Court of Human Rights during an appeals hearing on the court’s ruling in 2013 in favor of a Turkish Armenian Genocide denier, in the case entitled Perinçek v. Switzerland.

The case concerns the criminal conviction of Doğu Perinçek, Chairman of the Turkish Workers’ Party, for publicly challenging in Switzerland the existence of the Armenian Genocide. The government of Switzerland has also joined the appeals process, as have two Turkish human rights organizations that have submitted legal briefs in favor of Armenia.

During the arguments at the ECHR, Robertson presented a compelling case for Armenia by stating that Perincek specifically went to Europe to deny the Genocide, adding that the Turkish politician was an admirer of the Talaat Pasha, whom Robertson called the “Ottoman Empire’s Hitler.”

“It [the statement] was made by a man who only came to Switzerland in order to be convicted. That was his purpose. He went to Germany, France, at the end of the day he tried to go Greece to expostulate but was turned away. He is genocide denier forum shopper. He is an incurable genocide denier, a criminal and a vexatious litigant,” said Robertson.

In her presentation before the ECHR, Amal Clooney accused the court of being “simply wrong,” stating, “It [the court] casts doubt on the reality of Genocide that Armenian people suffered a century ago.”

“Armenia must have its day in court,” she added. “The stakes could not be higher for the Armenian people.”

“Having Geoffrey Robertson as a panelist during this year’s ANCA-WR Grassroots conference is sure to set a higher bar for any future such discussions, since he can present a first-hand account of a current case about the Armenian Genocide that is being heard in an international tribunal,” said ANCA-WR Grassroots committee co-chairman Ayk Dikijian, Esq.

“The issue of reparations for the Armenian Genocide has taken on renewed urgency after the centennial this year, and Robertson’s expertise can shed light and inform that discussion,” added Dikijian.

“One of the turning points of this year—the Armenian Genocide Centennial—was the hearing at the European Court of Human Rights and the adept manner in which the attorneys representing Armenia, Geoffrey Robertson and Amal Clooney, argued the case, bringing international attention to the issue of Genocide denial and justice for this crime against humanity,” said ANCA-WR Chairwoman Nora Hovsepian.

“It is only fitting that as the foremost Armenian-American advocacy group, the ANCA-WR would honor these two legal trailblazers during its annual gala. In addition to her legal expertise and impressive professional resume as a human rights champion, Ms. Clooney brought her notoriety as an international celebrity to the issue of the Armenian Genocide and joined forces with Mr. Robertson as a formidable legal team on behalf of the Armenian Cause, for which we are deeply grateful,” added Hovsepian.

GLENDALE—Award-winning author, playwright and actor Eric Bogosian will be honored at the Armenian National Committee of America-Western Region’s Annual Gala Banquet on Sunday, October 25 and will be the featured panelist during that weekend’s ANCA Grassroots Conference Film & The Arts panel on Friday, October 23, both at the Hyatt Regency Century Plaza Hotel in Los Angeles.

Bogosian will receive the ANCA-WR Arts & Letters Award, which is presented to individuals who have distinguished themselves by advancing the Armenian Cause through literature and the arts, primarily for having used his celebrity to tell the true story of Soghomon Tehlirian and Operation Nemesis within mainstream literary circles through his new book published by Little, Brown and Company in April 2015. Bogosian also appeared in Atom Egoyan’s film “Ararat.”

Past recipients of the ANCA-WR award have included Academy Award nominee Atom Egoyan, Grammy Award winner Serj Tankian and System of A Down and acclaimed author Chris Bohjalian.

In addition to receiving this award, Bogosian will also appear as lead panelist of the ANCA-WR Grassroots Conference Film & The Arts panel to explore his book “Operation Nemesis: The Assassination Plot that Avenged the Armenian Genocide,” where he will describe how he became interested in the subject and how he spent seven years conducting extensive research all over the world to describe the historical background leading up to the Armenian Genocide, the decision by A.R.F. leaders to carry out the death sentences issued by international tribunals against the Ottoman Turkish perpetrators and organizers of the Genocide, and the assassination of Talaat Pasha and ensuing trial and acquittal of Soghomon Tehlirian.

Earlier this year, Bogosian was interviewed about the book by award-winning playwright and director Aram Kouyoumdjian, who will also serve as moderator for the Grassroots panel discussion. The full interview can be found at http://asbarez.com/134447/asbarez-exclusive-eric-bogosian-on-writing-operation-nemesis-and-how-the-project-radicalized-and-changed-him/.

Since that time, Bogosian has appeared at various conferences and seminars in the Armenian community in New York, Boston, Detroit, Los Angeles and elsewhere to discuss his book within the context of the Armenian Genocide Centennial. Outside the Armenian community, Bogosian has had many appearances at bookstores and other events where he has utilized the opportunity to educate the general public about the fascinating story of Operation Nemesis and the Genocide which led to its planning and execution.

During its previous two iterations, the ANCA Grassroots Film & The Arts panel has served as the marquee kick off to the acclaimed conference, which brings together leaders from the worlds of politics, academia, law, entertainment and communications during a weekend that informs and empowers its participants to become outspoken activists for the Armenian Cause.

“We are privileged to have Eric Bogosian not only kick off our very successful Grassroots Conference, but also for also providing us with the opportunity to honor him for his decades of activism through the arts and especially for bringing the important story of Operation Nemesis to the forefront in this year of the Genocide Centennial,” said Chairwoman of the ANCA-WR Board, Nora Hovsepian.

Eric Bogosian’s career accomplishments range from behind the scenes as a playwright and novelist, to acting in front of the camera and live audiences on film, in television, and on the stage. He wrote and starred in the play, “Talk Radio” (NYSF – 1987; on Broadway starring Liev Schreiber- 2007), for which he was nominated for a Pulitzer Prize and a Tony award. For his film adaptation of the play, Bogosian received the Berlin Film Festival “Silver Bear.” His six solo performances Off-Broadway between 1980 and 2000, (including “Drinking in America”, “Sex, Drugs, Rock & Roll” and “Wake Up and Smell the Coffee”) received three Obie awards. In addition to “Talk Radio”, Bogosian has written a number of full-length plays including “subUrbia” (LCT, Second Stage, also adapted to film), “Griller” (Goodman), “Red Angel” (Williamstown Theater Festival), “Humpty Dumpty” (The McCarter), and 1+1 (New York Stage and Film). He is also the author of three novels, “Mall”, “Wasted Beauty” and “Perforated Heart” and a novella, “Notes from Underground,” in addition to “Operation Nemesis.” He is a Guggenheim fellow.

As an actor, Bogosian has appeared in numerous films and television programs, starring in Robert Altman’s “The Caine Mutiny Court Martial”, Oliver Stone’s “Talk Radio”, as Travis Dane in “Under Siege II”, as Eddie Nash in “Wonderland” and as Captain Danny Ross in sixty episodes of “Law & Order: Criminal Intent.” In 2010, he starred on Broadway in “Time Stands Still” with Laura Linney, Brian Darcy James, Alicia Silverstone and Christina Ricci.

In April 2014, Theater Communications Group published the full collection of Bogosian’s monologues, titled “100 (monologues).” A website dedicated to actors performing the monologues can be found at 100monologues.com

The ANCA-WR Grassroots conference will take place on October 23 and 24 at the Hyatt Regency Century Plaza Hotel. Admission to the conference is $85 and $50 for students. However, the committee is offering early registration incentives of $55 and FREE admission for students if registration is completed by October 1. Visit https://www.ancawr.org/grassroots/register/

This year’s ANCA-WR Gala Banquet will be one of the largest the organization has hosted. The event, which has become one of the most anticipated events of the calendar year, will be held on Sunday, October 25 at the Hyatt Regency Century Plaza Hotel. For information and to reserve a table please visit https://www.ancawr.org/gala/.

The ANCA-WR Grassroots conference will take place on October 23 and 24 at the Hyatt Regency Century Plaza Hotel. Admission to the conference is $85 and $50 for students. However, the committee is offering early registration incentives of $55 and FREE admission for students if registration is completed by October 1. Visit www.ANCAWRGrassroots.org to register online or learn about sponsorship and booth display opportunities.

This year’s ANCA-WR Gala Banquet will be one of the largest the organization has hosted. The event, which has become one of the most anticipated events of the calendar year, will be held on Sunday, October 25 at the Hyatt Regency Century Plaza Hotel. For information about purchasing tickets, corporate and tribute message sponsorship opportunities, please visit www.ANCAWRGala.org or call 818.839.1918.