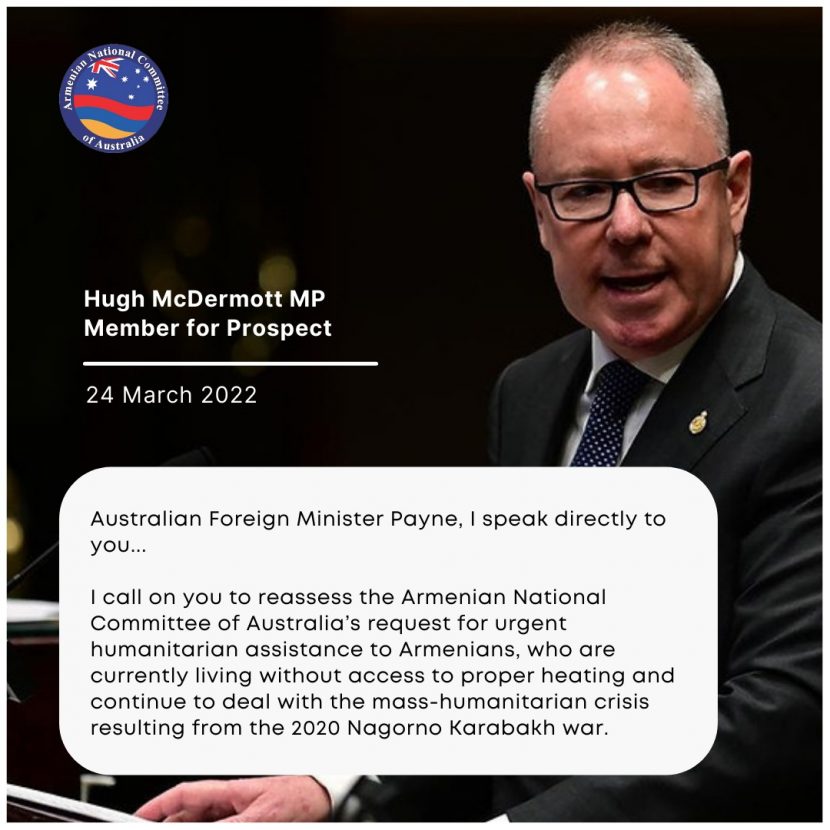 The Parliament of Australia’s largest state was alerted to Azerbaijan’s continuing campaign of terror and destruction against the indigenous Armenians of the Republic of Artsakh thanks to a speech by New South Wales Member for Prospect, Dr. Hugh McDermott MP, reported the Armenian National Committee of Australia (ANC-AU).

The politician, who was added to the persona non grata blacklist of Azerbaijani dictator Ilham Aliyev after visiting Artsakh in 2019, spoke to the New South Wales Legislative Assembly about the urgency for Australia and the international community to act, with recent actions by Azerbaijan under the cover of the Russia-Ukraine crisis the cause of great concern.

“In the highlands of Western Asia, wedged between the Democratic Republic of Armenia and the brutal dictatorship of Azerbaijan, lies a cradle of civilisation, over 100,000 indigenous Christian Armenians who wake up every day fearing it is their last,” McDermott said. “The date 27 September 2020 marked the commencement of this nightmare. On that day, Azerbaijan’s’ unprovoked, indiscriminate shelling of Artsakh, use of cluster munitions and Turkish-backed Syrian rebels commenced under the cover of a global pandemic.”

“As I speak before the Parliament today, for over 10 days, over 100,000 people are living in a part of the world experiencing gut-wrenching, sub-zero freezing temperatures without access to natural gas for heating their homes, schools and hospitals—100,000 men, women, children, the elderly, the sick and the infirmed. Whilst the international community is rightfully focused on the invasion of Ukraine, the cries of the people of Artsakh are falling on deaf ears. I will not let that happen. We, the New South Wales Parliament, should not let this happen,” he said.

McDermott went on to call on the Australian Government and the OSCE (Organization for Security and Co-operation in Europe) Minsk Group to take firmer action.

“I speak directly to the Australian Foreign Affairs Minister Marise Payne. Whilst I praise our nation for the generosity we have shown to our friends and allies in their time of need, the Armenian people desperately need our help, now more than ever. I call on the Australian Foreign Affairs Minister to reassess the Armenian National Committee of Australia’s request for urgent humanitarian assistance to Armenians, who are currently living without access to proper heating and continue to deal with the mass-humanitarian crisis resulting from the 2020 Nagorno-Karabakh war,” McDermott said.

“I speak directly to the OSCE Minsk Group. Enough is enough. Azerbaijan must be stopped. The petro- dictatorship of Aliyev must be stopped. The ongoing military violations discredits the Russian 9 November ceasefire agreement following the 2020 Nagorno-Karabakh war, which in turn resulted in the occupation of Artsakh. Since 13 May 2021 Azerbaijan has attacked the sovereign borders of Armenia time and time again.”

“Thank you to Dr. Hugh McDermott for taking the unheard cries from the hearts of the Armenian-Australian community and spilling it onto the floor of our state’s parliament,” said Kayserian. “We are thankful for friends like Dr. McDermott, especially at times our ancestral homeland and its inhabitants face a completely avoidable existential threat,” Kayserian added.