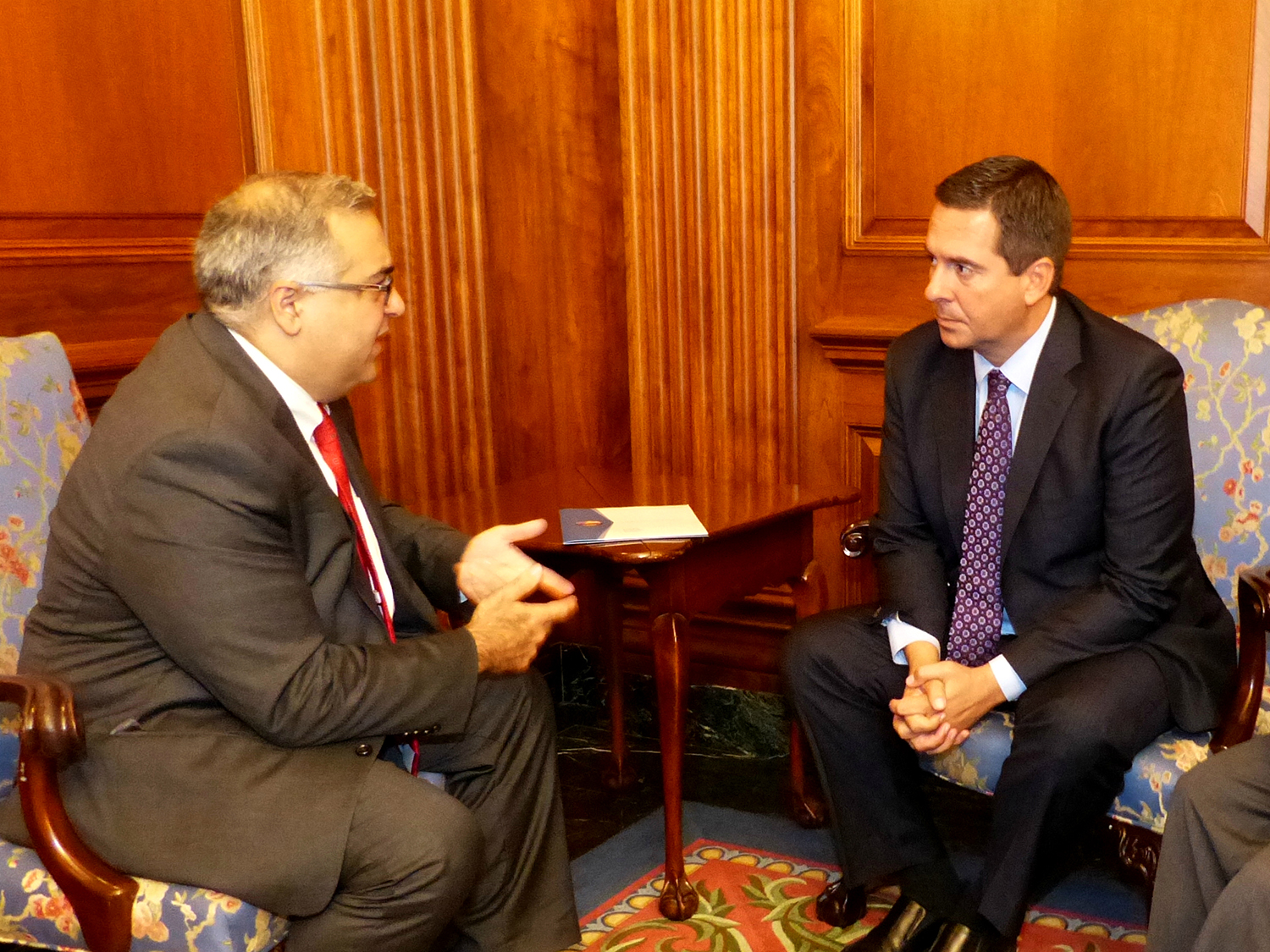 “I had a wide-ranging and productive discussion with Aram on important issues ranging from the need for full recognition of the Armenian Genocide to whether some functions of our Incirlik military base in Turkey should be transferred elsewhere,” said Chairman Nunes, following the meeting.

“We welcome this opportunity to explore a broad array of regional priorities with our friend, Chairman Nunes, including near-term options to reduce America’s reliance on Turkey’s Incirlik airbase,” said ANCA’s Aram Hamparian. “As Armenians know all too well, Turkey has long leveraged this base to hold America hostage. Diversifying our forward positioning will lessen the leverage of Turkey’s increasingly hostile Erdogan government, broadening America’s range of action across a broad array of regional, security, and humanitarian priorities – among them, of course, full and formal U.S. recognition of the Armenian Genocide,” concluded Hamparian.

Congressman Nunes has a long record in support of issues of special concern to Armenian Americans in California’s Central Valley and across America, and has received an “A” rating from the ANCA over the past 4 terms in office. He has been an ardent advocate of U.S. reaffirmation of the Armenian Genocide, having cosponsored related legislation in every term since his election to office in 2002. He has consistently called on both Democrat and Republican U.S. presidents to properly commemorate the crime in their April 24th annual remembrance statements and visited the Dzidzernagapert Armenian Genocide Memorial in Yerevan, Armenia in 2012.

On Artsakh safety and security he has been equally outspoken, consistently supporting the implementation of the Royce – Engel peace proposals. At the start of the 4-day Azerbaijani attack on Artsakh in April, 2016, Nunes cautioned, “The clashes in Nagorno-Karabakh risk escalating into a dangerous, wider war. The ceasefire must be scrupulously observed, while Azerbaijan needs to implement widely-supported peacekeeping measures along the line of contact, including a withdrawal of snipers and an expanded role for the OSCE.” In 2018, he was one of only two Republicans calling for expanded aid to Armenia and Artsakh for Fiscal Year 2019.

Congressman Nunes condemned the Erdogan-ordered attacks on peaceful protesters in Washington, DC in May, 2017, stating “Erdogan is busy turning his own country into an authoritarian state, but he needs to know that his thugs are not welcome here and that there will be consequences for this attack.”

In 2003, Rep. Nunes joined with the ANCA Central California to honor then State Senator Chuck Poochigian as ANC Man of the Year. “It’s really about honesty–integrity and a man who is a tireless worker on behalf of all the people,” said Congressman Nunes.

Nunes was first elected to public office as one of California’s youngest community college trustees in state history at the age of 23. In 2001, he was appointed by President George W. Bush to serve as California State Director for the United States Department of Agriculture’s Rural Development section. He left this post to successfully run for California’s 21st congressional district and now serves in the 22nd district as a result of redistricting in 2010.

Nunes was appointed to the House Permanent Select Committee on Intelligence in the 112th Congress and became its chairman in the 114th Congress.