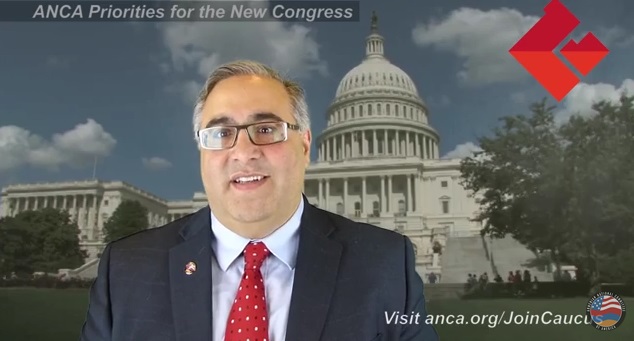 ANCA Executive Director: ‘Congress is Back in Session, and That Means the ANCA is Back at Work’

“Congress is back in session, and that means the ANCA is back at work,” Hamparian told the Armenian Weekly in a short video interview, in which he outlined key ANCA advocacy priorities. “We have a robust legislative agenda, all aligned with the ANCA’s core mission: the North Star of the Armenian Cause – the security, viability, and prosperity of the Armenian nation,” Hamparian said.

Hamparian called for a break with decades of Executive and Legislative branch complicity in Turkey’s denial of the Armenian Genocide, paving the way for U.S. policy that reaffirms the record of U.S. recognition – including President Reagan’s 1981 proclamation; presses Turkey to abandon its denial of truth and end its obstruction of justice; and promotes security and economic viability for Armenia, and creates the conditions for improved Armenian-Turkish relations, based upon a just and comprehensive international resolution of the still unpunished crime.

Hamparian went on to outline the ANCA’s plans to support peace for the Artsakh (Nagorno-Karanagh/NKR) Republic. “Obviously, Artsakh will be a very high priority for our community,” Hamparian said, explaining that strengthening the 1994 ceasefire will help foster a conducive environment for a durable and democratic international settlement of security and status issues related to the Artsakh Republic.

“In terms of the region, we’re also going to focus on the U.S.-Turkey relationship; there needs to be a careful and close review of that process,” Hamparian said, explaining that there must be a fundamental reassessment of U.S. military and political relations with an increasingly unstable Turkish government. “Why, for example, are U.S. nuclear weapons still positioned in such a hostile, unstable, and often unfriendly nation. We need to take a careful look at that,” Hamparian said.

Hamparian then outlined the ANCA’s foreign aid priorities. The ANCA will be working with appropriators to advance a broad array of Fiscal Year 2018 foreign aid priorities, including at least $5 million in Artsakh aid for HALO Trust de-mining & Lady Cox Rehabilitation Center; targeted U.S. aid to help Armenia transition Syrian Armenians and other at-risk minorities; and at least $40 million in economic and technical assistance to Armenia.

“We are going to focus on those aid programs, but also move forward with our Aid to Trade transition by focusing on economic development that promote growth, hope, and opportunity in Armenia,” said Hamparian. The ANCA will support Armenia’s economic development and international integration by securing a tax treaty eliminating the threat of double taxation of firms operating in both jurisdictions’ pushing for a new Millennium Challenge Account compact with Armenia that funds STEM (Science, Technology, Engineering, and Math) education; and lobbying for the launch of direct flights from Los Angeles to Yerevan flights, connecting two centers of the Armenian world.

At the conclusion of the interview, Hamparian urged the Armenian-American community to reach out to their Members of Congress in support of the Armenian Caucus. “The Armenian Caucus, operating on a bipartisan basis, is going to be foundation of so much we are going to accomplish in these next two years,” he said, calling on community members to visit anca.org/joincaucus to contact their Members of Congress.

Hamparian: A Deep Dive into the ANCA’s 2017 Legislative Priorities

The video – first shared live on Facebook on January 10th – is a followup to an interview done with The Armenian Weekly a week prior.