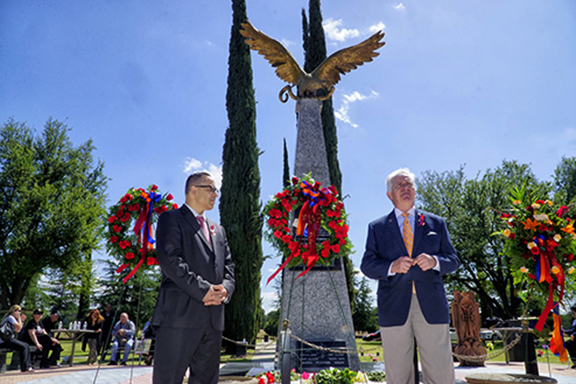 (ASBAREZ, 03/05/2016) Fresno — “The bells of Sardarabad continue to ring for the people of Artsakh,” said National Chairman Raffi Hamparian of the Armenian National Committee of America, sounding the alarm against the ever present danger of Azeri aggression. Hamparian spoke before a crowd of several hundred as part of the Central Valley’s Flag Raising and Armenian Genocide Commemoration at the Fresno City Hall.

In linking Armenia’s heroic stance against the Ottoman military in 1918 to this year’s Four Day War initiated by the Republic of Azerbaijan, ANCA director drew a verse from the well-known battle hymn Sardarbad.

Hamparian began his speech by reciting the names and ranks of seven fallen Armenian soldiers from the recent conflict. In direct reference to the atrocities committed by Azeri forces against Armenian civilians and military, he punctuated each name by affirming, “He died to prevent another Armenian Genocide. He died for me and for you.”

To conclude his powerful address, Hamparian urged the continued activism of the community by recalling the words of Martin Luther King “A man can’t ride you unless your back is bent.”

Long-time Armenian supporter Congressman Jim Costa also spoke at the event. The Fresno-born legislator remarked on the commonly-stated response by US State Department officials that US recognition of the Genocide would upset its ally the Republic of Turkey, commenting that such views amount to thinly-veiled excuses rather than well-reasoned long-term policy. As one instance, multiple resolutions by the European Union calling on Republic of Turkey to recognize the Genocide have been routinely condemned by the country’s high-level officials. In spite of such short-term reaction, says Costa,

“Turkey still wants to become part of the European Union. Why? Because countries do what is ultimately in their best interests. When we finally have the courage as a nation—the congress and the president—to actually say the words Armenian Genocide that while Turkey will be upset, they will follow by doing what is in their best interests.”

Attorney and congressional candidate Danny Tarkanian shared his family’s tragic experiences during the Genocide and acknowledged the recent passing of two prominent Armenian-Americans—businessman Kirk Kerkorian and his father and basketball coach Jerry Tarkanian. He, too, ended his message with an appeal for activism by stating “Speak-up and do something, otherwise evil will flourish.”

Members of the Ohannessian family performed various musical selections. Hygo Ohannessian accompanied by local clergy lead the audience in Hayr Mer to open the event. She also sang the US and Armenia national anthems as the flags were raised. Astghik Ajamian and Kevork Ajamian gave their heart-felt renditions of Sardarabad and Aghunik, respectively.

Fresno County Supervisor Debbie Poochigian served as the emcee of the event, which was attended by numerous local officials and leaders of the Armenian community. Members of the Sassoun Chapter of the Homenetmen Scouts and Fresno High School Junior ROTC raised the colors.

Prior to the flag raising, a march was held from the Holy Trinity Armenian Apostolic Church to Fresno City Hall. Following the event, Hamparian and Costa together laid a wreath at the monument of Soghomon Tehlirian at the Massis Cemetery to honor the survivor and avenger of the Genocide.

The events were sponsored by ANCA – Central Valley, which has held the flag raising ceremony since 2004.