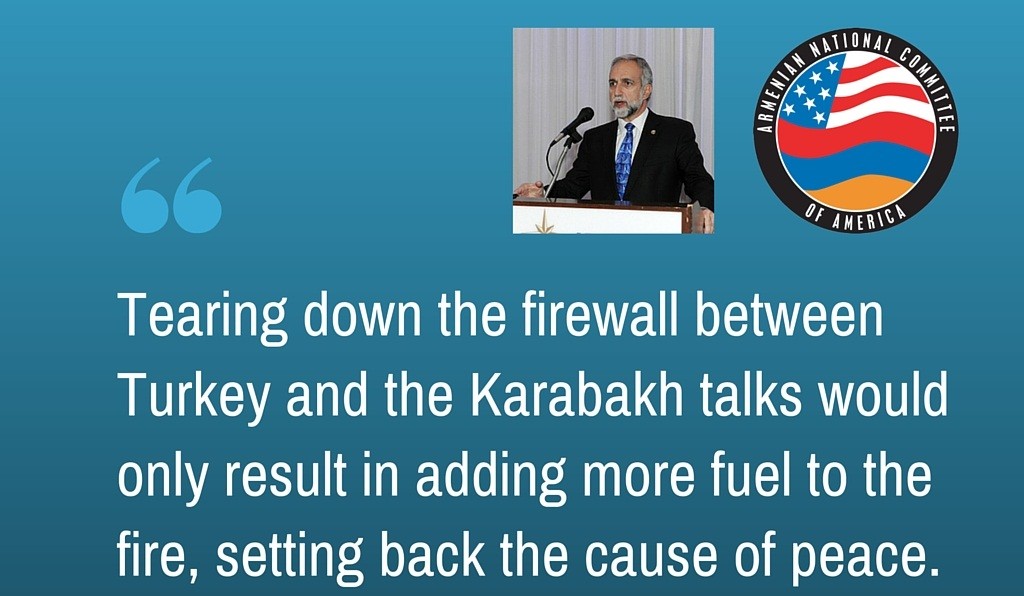 Hachikian: Tearing Down Firewall Between Turkey And Karabakh Talks Would Only Add Fuel To The Fire

“In the wake of Ambassador Baer’s recent reckless statement, it is clear that the leadership of our State Department needs to exercise considerably greater caution and thoughtfulness regarding officials who encourage a direct Turkish role in the Nagorno Karabakh peace process.

“Ankara makes no secret of its pro-Baku bias, and long ago abandoned any pretense of neutrality. Look at the facts: The Erdogan government actively supports Aliyev’s virulent anti-Armenian positions, openly providing military aid and training to the Azerbaijani military, while, at the same time, blockading Armenia, contrary to international law, and seeking to isolate Yerevan in the international arena. Turkey’s strategy — and the international community’s unwillingness to call them out on it — has emboldened an aggressive and intransigent Azerbaijan to increase its attacks – leading to over 43 Armenian deaths in 2015 alone.”

“Why then, do U.S. officials allow themselves to be used as props in Erdogan’s farce, pretending that the Turkish government will – against all evidence – play the role of some sort of impartial mediator?”

“Why is it that U.S. leaders can’t seem to find our moral compass when its comes to Turkey – on issues ranging from justice for the Armenian Genocide and a peace for Syria to freedom for Nagorno Karabakh?”

“This Administration’s shameful legacy of endlessly caving in to Turkish threats – at the expense of our own values and interests as a nation – is truly a national disgrace – an embarrassment beneath the dignity of the American people.”

“Tearing down the firewall between Turkey and the Karabakh talks would only result in adding more fuel to the fire, setting back the cause of lasting peace.”

Earlier today, in an ANCA social media posting regarding Amb. Baer’s comments, ANCA Executive Director Aram Hamparian noted: “Instead of making such transparently unfounded excuses for an increasingly antagonistic ally, the Department of State and the OSCE leadership should publicly press Azerbaijan to lift its objections to the immediate implementation of the life-saving Royce-Engel peace proposals.”