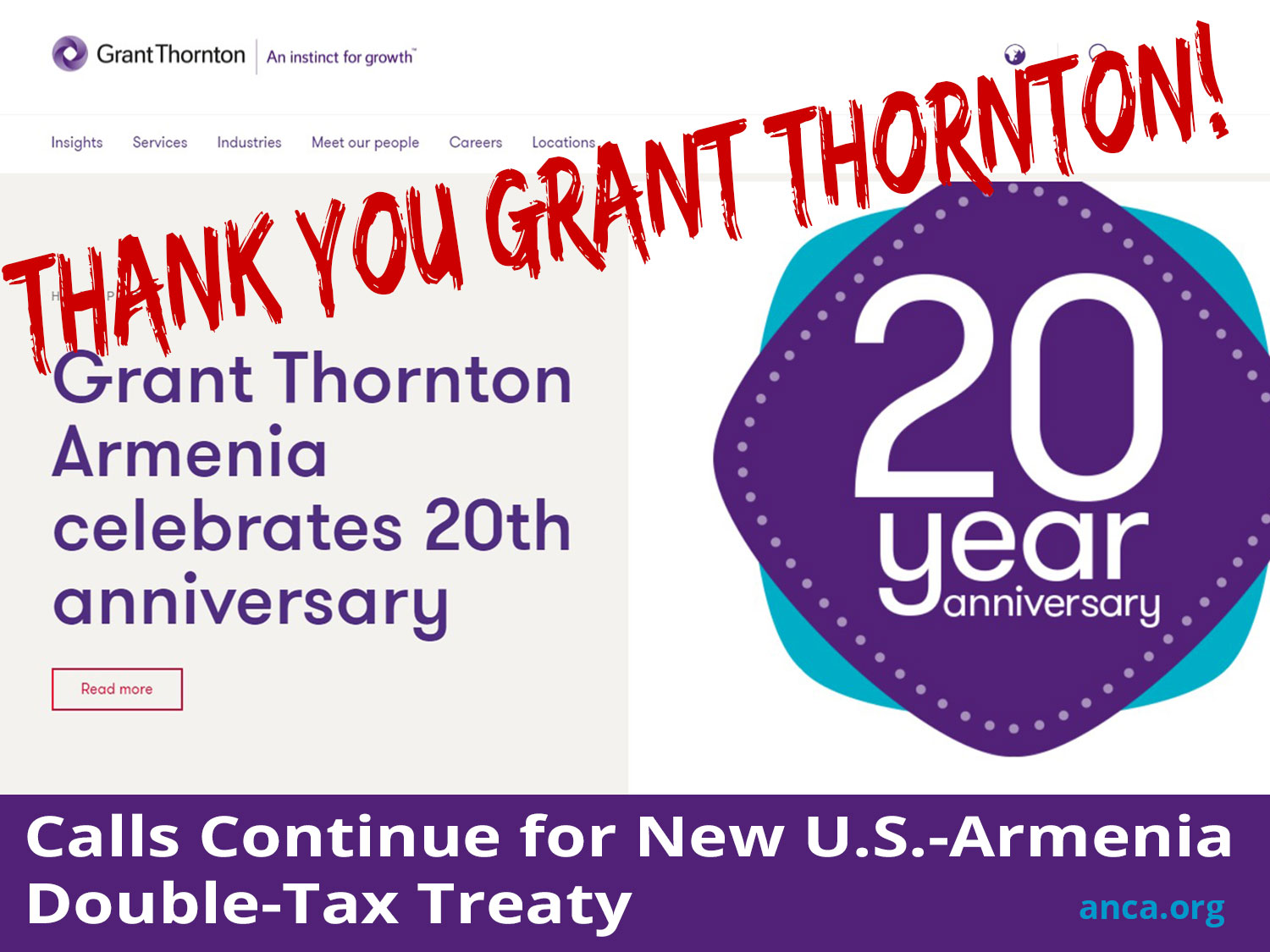 WASHINGTON, DC –The Armenian branch of Grant Thornton – the world’s sixth largest accounting firm – has called on the U.S. Department of Treasury “to negotiate a mutually-beneficial Double Tax Treaty with the Republic of Armenia,” reported the Armenian National Committee of America (ANCA).
]

“The ANCA welcomes Grant Thornton’s full support for a US-Armenia Double Tax Treaty,” remarked ANCA Chairman Raffi Hamparian. “We look forward to the U.S. Treasury Department engaging with the Republic of Armenia – without delay – to conclude this much-needed accord,” Hamparian added.

Grant Thornton generates annual revenue of over $1.7 billion and employs more than 7000 employees worldwide. Grant Thornton Armenia consists of over 160 experienced international and local public accountants and auditors, advisers in finance, business and management, as well as tax and legal advisers, working at two offices in Yerevan. They are celebrating their 20th year in Armenia this year.

“In the spirit of the recently negotiated U.S.-Armenia Trade and Investment Framework Agreement, which is already producing real dividends, I encourage you to move forward expeditiously with a Double Tax Treaty,” explained Grant Thornton Armenia Managing Partner Gagik Gyulbudaghyan in an August 7th letter to Secretary Mnuchin. “By eliminating the threat of double taxation we would both remove an artificial barrier to American investment and also incentivize businesses from both nations to explore new avenues for cooperation.”

Grant Thornton is the latest in a growing list of U.S. and Armenia firms calling for a new U.S.-Armenia double tax treaty. In September 2017, the ANCA joined with Paul Korian and Peklar Pilavjian, leading U.S. investors in Yerevan’s landmark Marriott hotel, for a series of Capitol Hill and State Department meetings making the case for an updated compact. Internationally renowned Tufenkian Artisan Carpets; Triada Studio, the Armenia-based creator of the Apple Design Award-winning Shadowmatic Game; and PicsArt, the Yerevan and San Francisco based makers of one of the most popular photo-editing, collage and drawing apps, are among the many firms who have been outspoken on the matter.

In February, Treasury Secretary Steven Mnuchin, during Congressional testimony before the U.S. House Financial Services Committee, agreed – in response to direct questioning by Rep. Brad Sherman (D-CA) – to commit Treasury Department officials to pursue a new U.S.-Armenia Double Tax Treaty. Just days before, Rep. Sherman and Rep David Valadao (R-CA) were joined by over 30 U.S. House members in cosigning a Congressional letter urging Secretary Mnuchin to begin negotiations with Armenia on the treaty. Rep. Sherman followed up on his questioning during a July hearing with Secretary Mnuchin.