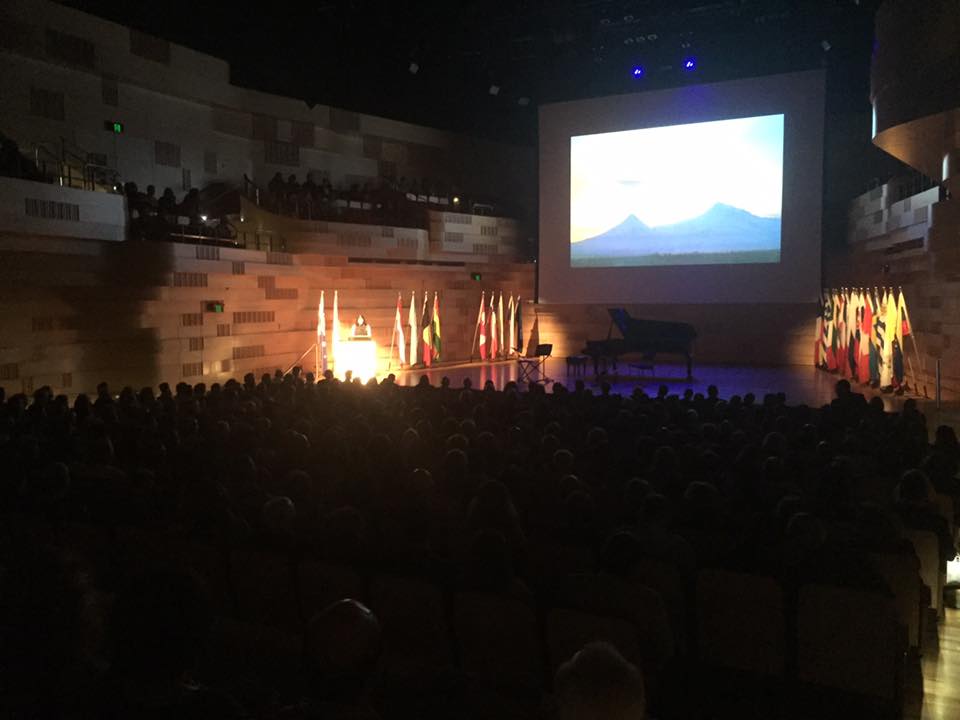 SYDNEY: Around 1,000 guests filled The Concourse in Chatswood for the National Armenian Genocide Commemoration Evening, which featured grandchild of Armenian Genocide survivors and current Premier of New South Wales, Gladys Berejiklian, as well as a keynote address by international guest of honour, Kate Nahapetian.

During the Special Program marking the 102nd Anniversary of the Armenian Genocide, which featured cultural acts, audio-visual presentations and speeches from political and community leaders, two significant statements were relayed on behalf of The Australian Greens Party and Senator Nick Xenophon of the NXT Party, respectively. Both parties, who are powerful cross-bench players in the current Australian Federal Senate, called on the Australian government to recognise the Armenian Genocide (read more on this by clicking here).

Following opening remarks by MCs Olivia Dilanchian and Maral Boyadjian on behalf of the organising Armenian Genocide Commemorative Committee, Armenian National Committee of Australia (ANC-AU) Managing Director invited Premier Berejiklian, who was welcomed to the stage with a standing ovation.

Berejiklian, who has been a regular at Armenian Genocide Commemoration events in Sydney since her primary school years, appeared for the first time as the leader of Australia’s largest state of NSW. She delivered an emotional address, which recounted her story as a direct descendant of Armenian Genocide survivors, including a trip to Armenia for the Centenary of the Armenian Genocide.

Berejiklian stated: “This gravest and darkest crime against humanity on an entire nation by the Ottoman Turks was an attempt to silence the Armenian voice. But the extermination campaign did not prevail, and we stand here today as a product of the genocide, an example of the strength and resilience of the survivors.”

“There is no doubt that the pain of this denial is passed down from one generation to the next. This ongoing denial acts as a horrific license for other genocidal states. Atrocity demands constant acknowledgement, constant recognition.”

Berejiklian concluded her speech with the following words: “Tonight, we remember all the victims of genocide, pay homage to the survivors, and renew our promise to ensure recognition and justice.”

The keynote speaker for the event was Kate Nahapetian, who is the Executive Director of the Armenian Legal Centre for Justice & Human Rights.

Nahapetian, who was invited from Washington D.C. to address the audience, revealed how the genocide was a violation of international law of the time, which recognised the need for reparations, in addition to confronting the likely defences Turkey would present to oppose such claims, such as the Kars Treaty.

Noting that Turkey’s blockade of Armenia violates the Kars Treaty, which mandates open borders, Nahapetian explained that Turkey may have a stronger interest in ending the blockade, since it undermines the very treaty Turkey relies on to delineate its eastern border.

“The repeated failed attempts to ‘reconcile’ Armenia and Turkey without confronting the genocide prove over and over again that there are no short cuts…. It is time for the international community to honour its commitment to ‘prevent and punish genocide’ and support Armenians in their quest for justice,” explained Nahapetian.

From the guests, others who addressed the audience at this event were:

A closing prayer and blessing was delivered by Bishop Haigazoun Nadjarian – Primate of the Armenian Apostolic Church in Australia and New Zealand.

Armenian-Australian Federal Member of Parliament, Tim Wilson was among the guests to have addressed that audience at the Mazenod College, and his remarks can be viewed below.

Earlier on the afternoon of April 23rd, over 3,000 Armenian-Australians held a #MARCHFORJUSTICE in Sydney’s central business district (click here for more information).