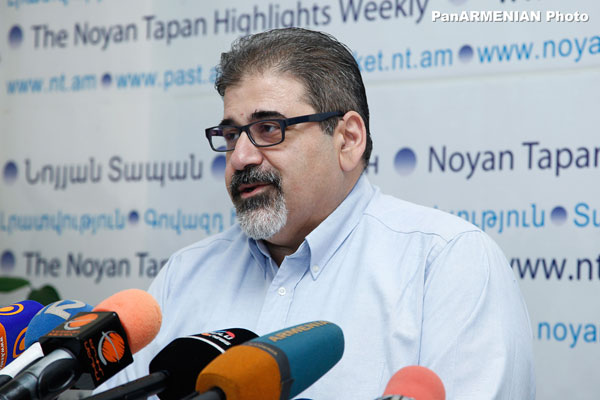 SYDNEY: The Armenian National Committee of Australia (ANC Australia) has announced that Giro Manoyan will visit from Armenia to headline its 2014 Advocacy Week, which will take place in October.

Manoyan, who has been based in Yerevan since 1999, currently serves as the Armenian National Committee’s International Executive Director. A native of Canada, Manoyan graduated from Concordia University and assumed the position of Executive Director of the Armenian National Committee of Canada throughout the 1980s. From 1989 to 1991, he was the Assistant Editor, and from 1991 to 1999 the Editor, of the Horizon Weekly Canadian-Armenian newspaper.

He is regarded as one of the leading political analysts in the Republic of Armenia and has travelled the world in the advancement of the Armenian cause.

Manoyan’s visit to Australia comes on the eve on the Centenary of the Armenian Genocide and heightened tensions in the region as a result of Azerbaijan’s ongoing aggression toward the Republic of Nagorno-Karabakh and the Republic of Armenia.

ANC Australia’s Executive Director, Vache Kahramanian remarked: “We are delighted to have Mr. Giro Manoyan join us in Australia. His experiences and knowledge will provide an important insight in the lead up to the centenary of the Armenian Genocide as well as ongoing developments in the Republic of Armenia.”

Manoyan will take part in a number or events during his visit to Australia, including delivering the keynote address at the ANC Australia Annual Banquet, which will take place on October 26th, 2014. More details will be released soon.