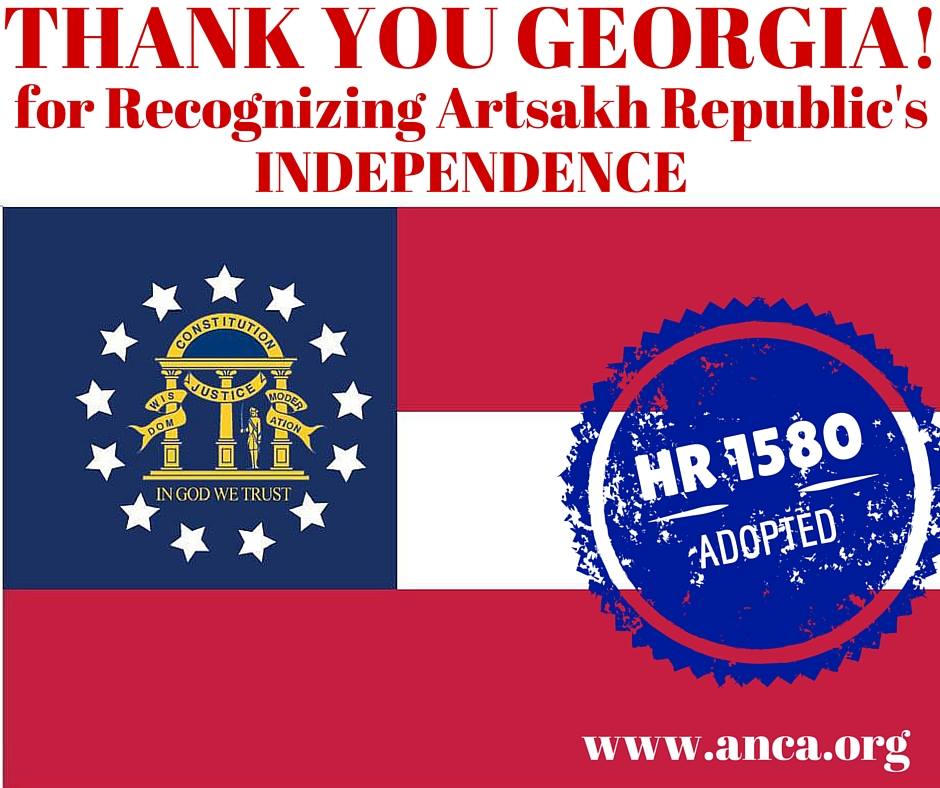 ATLANTA, GA – The Georgia State House has adopted legislation recognizing the Republic of Nagorno Karabakh and calling upon the international community “to give appropriate recognition to the Nagorno Karabakh Republic as a free, independent, and sovereign democracy,” reported the Armenian National Committee of America – Eastern Region.

The Georgia resolution was spearheaded by Representatives Pat Gardner (D-Atlanta) and Demetrius Douglas (D-Stockbridge), both broadly respected Members of the legislature with strong records on education and human rights related issues. The legislators worked closely with ANC of Georgia advocates Dr. Sarkis Agasarkisian and Harutyun Agasarkisian, who have, for more than a decade, worked closely with federal, state and local officials on issues dealing with the Armenian Genocide and broader concerns dealing with Armenia and Artsakh.

“The Georgia Armenian community applauds the leadership of Representatives Gardner and Douglas in securing Georgia’s recognition of Nagorno Karabakh, affirming the universality of the democratic rights and freedoms that are the birthright of Americans and all the citizens of the world,” said Dr. Agasarkisian. “Having taken this proud and principled stand, we now look to other American states to join with Georgia in recognizing Artsakh.”

The measure, H.R. 1580, which was brought to the floor for a vote on March 2nd and overwhelmingly adopted on a bipartisan basis, makes Georgia the sixth U.S. state to pass legislation recognizing the Nagorno Karabakh Republic, including California, Louisiana, Maine, Massachusetts, and Rhode Island.

In a series of whereas clauses, H.R. 1580 sets forth the facts regarding Nagorno Karabakh and its enduring struggle for freedom. The measure, in addition to calling for formal international recognition of Artsakh’s independence, recognizes the “sacrifices, dedication, and resolve shown by the people of the republic in the face of extreme adversity” and “extends best wishes for peace, prosperity, and continuing success.”

“We are profoundly gratified that America’s fundamental commitment to freedom is powerfully affirmed today in the state of Georgia’s principled recognition of the independence of the Republic of Nagorno Karabakh. This action truly underscores that the citizens of Georgia see liberty as an inalienable right, not just for Americans but for all the peoples of the earth,” said the Stephen Mesrobian, ANCA Eastern Region Chairman. “We thank the Agasarkisian family and all our local activists, and look forward to working with all our community and coalition partners to grow American support for Artsakh’s independence in cities and states across our great nation.”

The full text of the Resolution is copied below.

By: Representatives Gardner of the 57th and Douglas of the 78th

Honoring and recognizing the Nagorno Karabakh Republic; and for other purposes.

WHEREAS, the Nagorno Karabakh Republic has a long and storied history, holding a cherished place in the Armenian people’s history and culture; and

WHEREAS, the Nagorno Karabakh Republic declared its independence on December 10, 1991, after a long struggle that in some respects continues to this day, and the persistent demand for self-determination was an inspiration to people of many nationalities in the region, becoming one of the catalysts for the breakup of the former Soviet Union; and

WHEREAS, through the course of the last two decades, the people of the Nagorno Karabakh Republic have shown tenacity and perseverance in the face of war, massacres, economic deprivation, and other tremendous hardships; and

WHEREAS, for more than 20 years, the Nagorno Karabakh Republic has stayed true and faithful to its citizens by remaining independent while working to bring change and stability to the Caucasus region and by holding free and fair elections and referendums that were widely declared as a model for the region; and

WHEREAS, international observers, including the United States, have assessed the May 3, 2015, Parliamentary Elections in the Nagorno Karabakh Republic as free and transparent.

NOW, THEREFORE, BE IT RESOLVED BY THE HOUSE OF REPRESENTATIVES that the members of this body honor the Nagorno Karabakh Republic and its citizens; recognize the sacrifices, dedication, and resolve shown by the people of the republic in the face of extreme adversity; extend best wishes for peace, prosperity, and continuing success; and encourage the international community to give appropriate recognition to the Nagorno Karabakh Republic as a free, independent, and sovereign democracy.

BE IT FURTHER RESOLVED that the Clerk of the House of Representatives is authorized and directed to make an appropriate copy of this resolution available for distribution to the Nagorno Karabakh Republic.