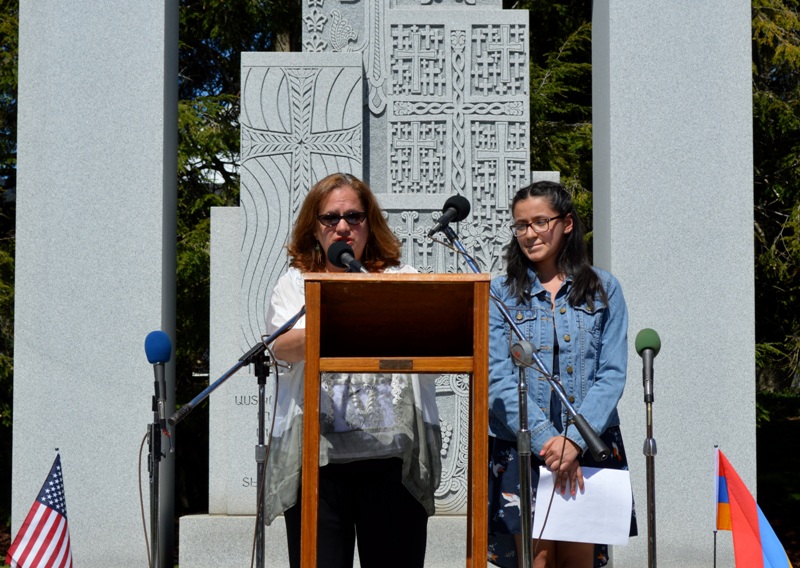 (ARMENIAN WEEKLY, May 23) PROVIDENCE, R.I.— The Rhode Island branch of The Genocide Education Project recently announced the recipient of its 2017 Genocide Educator of the Year Award: Claudia Traub. The award was presented by R.I. branch co-chairs, Pauline Getzoyan and Esther Kalajian, at the 102nd commemoration of the 1915 Armenian Genocide on April 23 at the monument at North Burial Ground in Providence. Along with a framed certificate of recognition, the award comes with a $500.00 stipend made possible by the generosity of the Armenian National Committee of R.I. and the Armenian Martyrs’ Memorial Committee of R.I.

Ms. Traub has been a fifth to eighth grade Social Studies teacher at Sophia Academy for two years. In her letter of recommendation, Sophia’s head of school, Gigi DiBello, stated, “Claudia teaches a unit in the 8th grade on resistance and the human spirit with a focus on the Holocaust and its connection to the refugee crisis and other current events. Recently, Claudia attended a conference at the UN to help her to better teach the Refugee Crisis today and possible Genocide in Syria. Students learn the difference between ally, solidarity partner and sympathizer. Most importantly and relevant in today’s world, our students learn from Ms. Traub the ways that individuals and whole communities resisted, and the impact small and large acts of resistance can have in the face of oppression and hate.”

After speaking with Ms. Traub, it became clear that teaching this subject matter is very personal for her. Both of her parents narrowly escaped the concentration camps, and most of her family was killed in the Holocaust. She is fortunate in that both her parents shared their survivor stories with her. In her words, “It is these stories that remind me to focus on the human beings always, as the staggering numbers we hear tossed around in conversations about genocide begin to have a narcotizing effect on our conscience.” Because she is teaching students at the middle school level, Ms. Traub is careful in her approach, as the subject matter is developmentally challenging. She believes that our children will be the ones to change the course of human history. As she stated, “These young girls that I teach have the power to be triumphant, the courage to stand by as allies and solidarity partners, the strategies and organizing skills to resist, the intelligence and audacity to believe that they can! Many of our students come from homelands ravaged by Genocide.” Her instruction touches on several genocides, including the Armenian, Rwandan, Serbian, Cambodian, Bosnian, and Darfur.

Finally, Ms. Traub integrates art and music in the study of genocide. She and her students look at artwork, music, poetry, and theatre that belonged to survivors, created before, during, and in response to historical and current day genocide. Last year, Ms. Traub worked on a play entitled “Seven,” which explored the lives of seven women who have become “Agents of Change” after experiencing genocide, rape, war, and much more. Sophia Academy’s seventh grade performed this show for 100 people at the Southside Cultural Center.

Sophia Academy is an independent school for middle school girls from low income homes in Providence. Sophia Academy, while not religious in any way, was founded in 2001 by Sister Mary Reilly, who was also the founder of Dorcas Place, now Dorcas International, home to many refugees new to R.I. and the U.S. Sister Mary envisioned a school that would inspire girls to dream. Today, Sophia students also learn how to advocate for themselves and others less fortunate while gaining critical academic and intellectual skills. There are two important points to note relative to Ms. Traub’s exemplary work in genocide education. In 2016, Sophia Academy received full accreditation through the Association of Independent Schools of New England and accolades from the visiting team who praised, in particular, their unique and comprehensive social justice program. Malala Yousafzai, the youngest Nobel Laureate honored for her efforts towards World Peace, chose to visit Sophia Academy in July of 2016, highlighting a local example of educational equity for girls from low income homes.

As a footnote, following the award presentation, Getzoyan and Kalajian were invited to speak about the Armenian Genocide with Ms. Traub’s 8th grade class. The students’ response was very positive and informed, given the excellent preparation by their teacher. “The Genocide Education Project of R.I. once again congratulates Ms. Claudia Traub on her award. In addition, we would like to thank all those who submitted recommendations for this year’s. There were many qualified and outstanding educators nominated, and that reinforces our work in this important area of study,” read a part of the statement released by the Genocide Education Project of R.I.